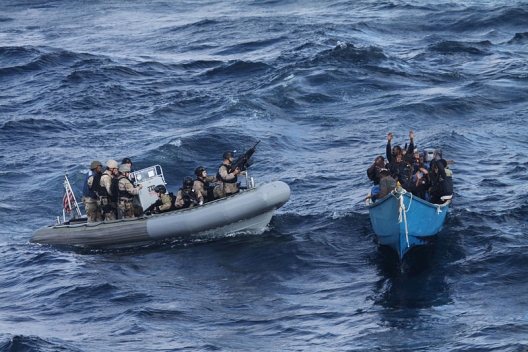 The Tom Hanks movie “Captain Phillips,” which opens Friday, will focus attention — again — on piracy off the coast of Somalia. The movie, in which (spoiler alert) the bad guys get caught, unfortunately might lead you to think that this is a problem that’s been solved. After all, since the April 2009 seizure of the cargo ship Maersk Alabama, recounted in “Captain Phillips,” there has been only one hijacking of a US-flagged vessel by Somali pirates, the February 2011 seizure of a US yacht in which the Americans were killed. And Somalia’s other evils — the Shabaab and its terrorist activities, for example — have taken over news headlines.

But a lull in activity doesn’t mean there is a happy ending. The threat of piracy remains, along with its underlying causes, and Somali piracy still carries an important message for the United States and for international order.

First, there are the economic costs of these attacks. Although the number of vessels actually hijacked in the Gulf of Aden and the western Indian Ocean has been decreasing, the number at risk is high. It is estimated that 30,000 tankers and cargo vessels transit these waters annually. Since 2008, the area has been declared a “war risk” zone subject to special insurance premiums, sometimes more than $150,000 per ship per voyage. A 2010 study estimated that marauders imposed $7 billion to $12 billion in annual losses on the global economy.

More robust security measures by commercial vessels have contributed to reducing successful pirate attacks, but the cost to business in general and the shipping industry in particular has been staggering.

Beyond the economic calculations, there are geostrategic considerations. If nothing else, the ragtag gangs of armed Somalis in speedboats have highlighted a gaping vulnerability in contemporary globalism, which is predicated on the free flow of capital, goods and services. Without freedom of navigation for peaceful commerce, large parts of that framework simply break down. Piracy is not merely a localized outbreak of lawlessness; it is a head-on challenge to international order.

But if Somali piracy is so pernicious, why has no one been able put a stop to it?

Although two-dozen or so nations have contributed naval vessels to patrol off Somalia, these forces alone are inadequate for the area they cover. Some pirates have merely changed their tactics in response to the naval presence, while others are biding their time until political will or the financial resources to sustain the massive naval deployment in the region give way.

Furthermore, the international community’s willingness to pay multimillion-dollar ransoms did nothing to discourage individuals from getting involved in piracy in the hope of winning the “Somali lottery” (the average ransom paid for a successfully hijacked vessel is more than $5 million). These incentives are compounded by the general lack of negative consequences for failure: For every Abduwali Abdukhadir Muse, the pirate portrayed (by Somali actor Barkad Abdi) in the film, who led the attack on the Maersk Alabama and was subsequently sentenced in US federal court to nearly 34 years in prison, there are the dozens of marauders who have been simply let go for want of a country willing to take custody of them and put them on trial, or who were tried, convicted and given risible sentences.

Finally, the lack of a functioning state in Somalia is arguably the principal cause of the piracy. Despite exhaustive efforts over the years, the international community has yet to agree on a practical solution to the statelessness that has been Somalia’s lot since the collapse of the last government there more than two decades ago. And, as the resurgence of a smaller but more radicalized, operationally sophisticated and lethal Shabaab — underscored by the Kenyan shopping mall attack and the US attempt to seize one of its leaders in Barawe, Somalia — makes it clear that self-congratulatory proclamations by US and European leaders about the successes of the current Somali government are little more than wishful thinking. No campaign against the pirates at sea or against the Shabaab can be sustainable unless the rule of law is reestablished on land.

In this context, “Captain Phillips” is a serious invitation to take in the big picture: Somali piracy is not just one dramatic incident in the past, neatly wrapped up in American heroics. Piracy — and its causes — remains a serious challenge to the economic, political and security underpinnings of the international system.

J. Peter Pham, director of the Atlantic Council’s Africa Center, is the coauthor of “Somalia: Fixing Africa’s Most Failed State” and the author of a monograph on Somalia to be published by the US Army War College’s Strategic Studies Institute.

Image: A visit, board, search and seizure team approaches a suspected pirate vessel in the Gulf of Aden in December 2011 (Photo: US Navy)