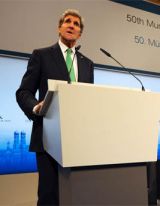 When Secretary of State John Kerry met his Iranian counterpart in Munich last weekend, Kerry raised Syria’s refusal to permit humanitarian aid to reach the embattled city of Homs and failure to relinquish its chemical weapons on schedule.

Iranian Foreign Minister Mohammad Javad Zarif, however, kept the meeting focused on upcoming negotiations over a comprehensive nuclear agreement with the United States, the other permanent members of the UN Security Council and Germany. Zarif did not “have authority” to discuss Syria, he told Kerry, according to the State Department.

Zarif, as a top adviser to President Hassan Rouhani and a member of Iran’s Supreme Committee on National Security, had ample authority to talk about Syria’s spreading crisis if he so chose, say well-informed individuals. Zarif’s deflection of Kerry’s overtures had more to do with Iran’s pique at being excluded from multinational peace talks on Syria held in Switzerland the previous week. UN Secretary General Ban Ki Moon invited Iran and then disinvited it when the Iranian government refused to publicly state that Syrian President Bashar al-Assad must step down as part of a political solution to the Syrian war.

Ban acted under pressure from the United States, which insisted that countries attending “Geneva II” first embrace the principles of “Geneva I” – a conference in 2012 where the U.S. and Russia set out ground rules for an elusive political solution to the crisis. But the representatives of the Assad government who showed up for Geneva II spent most of their time asserting that Assad wasn’t going anywhere. Moreover, the U.S. position – setting preconditions for Iran to attend Syria talks — is inconsistent with the Barack Obama administration’s willingness to negotiate with Iran about its nuclear program without demanding – as the George W. Bush administration did fruitlessly for most of its tenure — that Iran first agree to suspend its uranium enrichment program as the price of admission. If the U.S. wants Iran to use its considerable influence with the Assad government, why is it imposing conditions for joining talks?

The reason appears to be the Obama administration’s fear of further upsetting old friends in the region, particularly Saudi Arabia. The U.S. is on the defensive over what some Sunni Arab powers perceive as a U.S. tilt toward Shiite Iran. U.S. officials are at pains to say that the interim nuclear agreement reached with Iran last year – and a prospective comprehensive agreement that will be negotiated over the next six months starting Feb. 18 in Vienna – are separate from any wider reconciliation with the Islamic Republic. Washington claims it is on the same side as the Saudis, Kuwaitis and Emiratis when it comes to Syria and other regional issues.

But the U.S. reluctance to use military force in Syria last summer even after the Assad regime crossed Obama’s red line and repeatedly used chemical weapons, has left deep uncertainty among the Gulf Arabs about U.S. policies and re-stoked historic fears of a rising and malevolent Iran. The Arabs’ sense a shift in the strategic equilibrium that has persisted for the past three decades – since the Iranian revolution of 1979 and the Israel-Egypt peace treaty – and fear that a war-weary America is turning away from an increasingly dysfunctional Middle East.

Under Obama, the U.S. focus has been on counter-proliferation and counter-terrorism to deal with nuclear and chemical weapons and a rising jihadist threat in Syria, Lebanon, Libya, Iraq and Egypt. That focus is welcome news to Iran, which as the world’s largest Shiite power, is also concerned about Sunni fundamentalist groups that have targeted Iranians in Syria, Lebanon and Yemen.

The war in Syria has exacerbated sectarian tensions and underlined the important role played by the Iranians and Saudis as the backers of opposing proxies in the region. Without both countries at the table, it is hard to envision even limited cease-fires in the Syrian bloodbath, not to mention any more durable political solution.

Anne Patterson, the new U.S. Assistant Secretary of State for the Near East, says that Iranian-Saudi diplomacy is a “missing piece” in efforts to contain and ultimately resolve the Syrian crisis. When President Obama goes to Saudi Arabia next month, he might ask King Abdullah why the Saudis – who previously negotiated a peace agreement with Iran for Lebanon and routinely discussed regional security matters a decade ago – are so unwilling to discuss Syria with the Iranians now.

Even if Iran takes part in negotiations over Syria, there is, of course, no guarantee that the situation will get much better soon. Foreign fighters are flooding into the country according to U.S. intelligence, and Syrian opposition members are spending as much or more time battling each other as attacking regime forces.

The Syrian government continues to drop barrel bombs on the battered historic city of Aleppo as the death toll of 130,000 – 10,000 of them children – rises and refugees stream out to neighboring states.

In testimony this week before Congress, James Clapper, the Director of National Intelligence, said that Assad’s hold on power is stronger now than a year ago and that it was possible that the war would continue indefinitely in a “perpetual stalemate where neither the regime nor the opposition can prevail.”

In such a dire situation, the Obama administration should be encouraging outside powers to work together to halt the fighting and to provide urgently needed relief to civilians caught in the cross-fire.