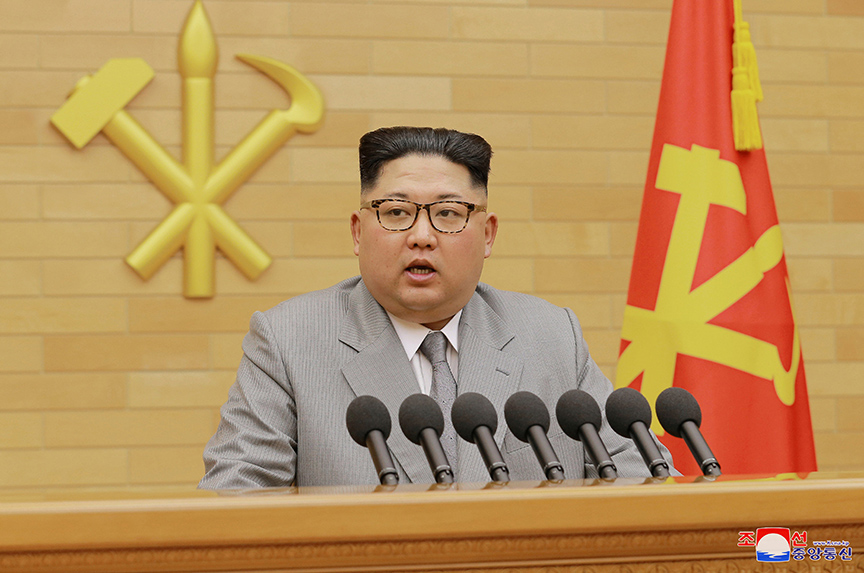 North Korean leader Kim Jong-un is likely trying to drive a wedge between the United States and South Korea with his uncharacteristic offer of an olive branch to Seoul, according to the Atlantic Council’s Robert A. Manning.

On January 3, North Korea reopened a border hotline with South Korea after two years of silence. That followed a proposal from Kim in his New Year’s Day speech to ease tensions with South Korea. Kim also suggested that North Korean athletes may participate in the Winter Olympics in the South Korean town of Pyeongchang in February.

Kim’s outreach may be a sign that tough international sanctions are beginning to hurt North Korea, said Manning, a senior fellow in the Atlantic Council’s Scowcroft Center for Strategy and Security. This, he surmised, may have led Kim to seek to “divide and conquer” the US-South Korean alliance.

“It is a time-honored tactic, particularly when there is a leftist government in Seoul—as you have now,” he added.

South Korean President Moon Jae-in has expressed an interest in mending ties with North Korea. Those ties have become strained as Pyongyang conducted multiple missile tests and its sixth nuclear test in 2017.

However, Manning believes that the apparent thaw between the neighbors is unlikely to amount to much.

Meanwhile, US President Donald J. Trump has continued to ratchet up the antagonistic rhetoric with Kim. In his latest tweet belittling Kim, Trump taunted the North Korean leader over the size of his nuclear button.

North Korean Leader Kim Jong Un just stated that the “Nuclear Button is on his desk at all times.” Will someone from his depleted and food starved regime please inform him that I too have a Nuclear Button, but it is a much bigger & more powerful one than his, and my Button works!

Such rhetoric is unhelpful, said Manning.

“It is completely counterproductive in terms of US strategic interests and [Trump’s] own policy toward North Korea, much of which is starting to be successful,” he said. “He is undermining it with his tweets.”

Robert A. Manning discussed developments on the Korean Peninsula in an interview with the New Atlanticist’s Ashish Kumar Sen. Here are excerpts from the interview.

Q: In his New Year’s Day speech, Kim Jong-un extended a rare olive branch to South Korea. On January 3, North Korea reopened a border hotline with South Korea that has been dormant for two years. What is driving Kim to make these overtures?

Manning: It is an interesting question. Remember South Korean President Moon Jae-in, too, had proposed suspending US-South Korean military exercises until after the Winter Olympics. My understanding is that Trump is quietly going along with that. That was the prelude.

Kim, meanwhile, also announced that he had completed his nuclear program. Perhaps sanctions are beginning to cause some pain and this has led him to open a different chapter in the North Korean playbook of divide and conquer and driving a wedge between the United States and South Korea. It is a time-honored tactic, particularly when there is a leftist government in Seoul—as you have now.

I don’t think it is a bad idea—as [South Carolina Republican] Sen. Lindsey Graham believes—to have talks about North Korea attending the Winter Olympics. We went to Sochi with [Russian President Vladimir] Putin’s drug-addled athletes after he invaded Ukraine and we are going to boycott our ally who is hosting the Winter Olympics because a few North Koreans are there? [The US Ambassador to the United Nations] Nikki Haley and Sen. Graham, who have suggested that the United States boycott the Olympics if the North Koreans are there, are disturbingly small-minded and don’t seem to grasp the harm that would do to the United States and its ally; not to mention, make us look very petty.

In fact, I would argue that if you have North Koreans at the Olympics, Kim is less likely to do any provocative acts during that period. Don’t forget, Kim is a sports guy. He would like to see the North Koreans win a few medals. I would not totally discount that as part of his motivation [to reach out to Seoul].

Q: Are we seeing the beginning of a thaw in relations between the two Koreas? What, if anything, can we expect from this development?

Manning: These things start and the North Koreans always find an excuse to back out. That has been the pattern. The North Koreans will probe it to see what they can get out of it and when they discover that the South is not willing to walk away from denuclearization there will be limits.

Q: Should there be preconditions for any talks aimed at defusing the Korean crisis? If so, what should these be?

Manning: The South Koreans have indicated that the talks that they have offered to hold next week in the demilitarized zone (DMZ) will be centered on North Korea’s participation in the Olympics. They will probably discuss other things like humanitarian aid and divided family visits. Those are issues which are very politically powerful in South Korea. For Moon, all politics is local.

Q: What does the apparent thaw mean for the prospects of more missile and nuclear tests by North Korea?

Manning: I think we may get a pause until after the Olympics. Instead of his tweets, Trump should tell Kim: “we will pause our military exercises if you pause all your testing.”

We have major military exercises scheduled [with South Korea] for the spring and I suspect they are going to go forward. You have to exercise with an ally otherwise you don’t have an alliance. But there is no harm in suspending the exercises for a few weeks. A temporary pause could lead to a wider opening.

When [US Secretary of State Rex] Tillerson spoke at the Atlantic Council in December, he offered unconditional talks himself. My understanding is that he doesn’t say things like that unless he runs them by Trump. They were probably hoping to get a reaction from the North Koreans, which they didn’t get, and then he backed away from it.

I wouldn’t be shocked to see some sort of preliminary North Korea-US talks flowing out of this minor thaw. I don’t know if they will get very far, but I don’t see any downside to what Tillerson was suggesting, which was unconditional talks with everything or nothing on the table.

In the end, the latest round of UN Security Council sanctions is extremely tough and limit even further the amount of oil to North Korea. That’s where we should put our emphasis.

Q: What are your thoughts on Trump’s approach to this crisis—his recent tweet taunting Kim on the size of his nuclear button, for instance?

Manning: Unfortunately, Trump doesn’t understand the strategic value of silence at the right time. He has put out several tweets that are at best confusing. What it shows you is Trump’s definition of the presidency is that of a reality TV show: a little drama where he gets attention and vanquishes an enemy. It is completely counterproductive in terms of US strategic interests and his own policy toward North Korea, much of which is starting to be successful. He is undermining it with tweets.

Q: Is there a risk that Trump’s bellicosity could lead the South Korean government to make too many concessions to Pyongyang in its eagerness to defuse the crisis with North Korea?

Manning: I think Moon understands that he needs to balance the denuclearization policy with his goals for moving forward on reconciliation. What might grow out of all this is movement toward some kind of a nuclear freeze. That would be dangerous because we don’t want to legitimize North Korea as nuclear power as we have done with Pakistan. That is their ultimate goal, to be treated as a normal state with nuclear weapons. It is one thing to live with a de facto nuclear power, it is another to legitimize it. I don’t think President Moon is willing to go in that direction—at least not yet.

What we have to worry about is things that undermine sanctions or provide hard currency to North Korea.

Our interests and South Korea’s interests are not absolutely identical. They have an interest in reconciliation. What we should be thinking about is what are the things they can do that we can live with and where are the redlines. They are probably going to think about reinstituting divided family visits and perhaps more humanitarian aid—things we should be able to live with—versus reopening the Kaesong industrial zone or any kind of activities that strengthen the North Korean economy and detract from sanctions. Anything that opens up North Korea seems to me to be in our strategic interests.

Moon is trying to balance his desire for North-South reconciliation with his denuclearization policies. There are limits to how far he will go.