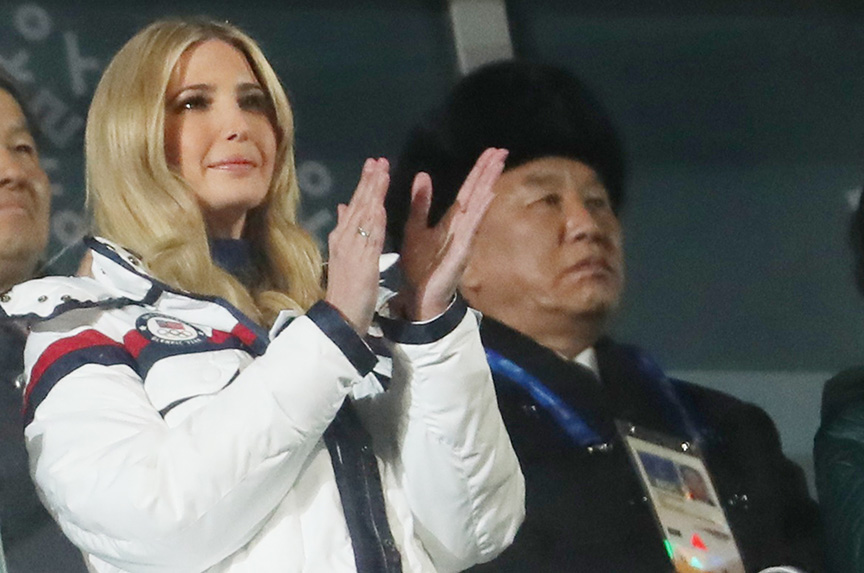 North Korean Gen. Kim Yong-chol was seated barely a few feet away from Ivanka Trump at the closing ceremony of the Winter Olympics in Pyeongchang, South Korea, on February 25. The world’s attention was focused firmly on them amid signs of a thaw in relations between North and South Korea. The two did not exchange a word.

Now Kim, a former chief of North Korea’s main intelligence agency and a man sanctioned by both the United States and South Korea, may play a critical role in facilitating a dialogue between Ivanka Trump’s father, US President Donald J. Trump, and North Korean leader Kim Jong-un.

Kim, who was given a special waiver to travel to the United States, is expected in New York on May 30. He will meet US Secretary of State Mike Pompeo. Salvaging the highly-anticipated Trump-Kim summit is at the top of their agenda.

Who is Kim Yong-chol?

Kim is a vice chairman of the ruling Workers’ Party’s Central Committee. More importantly, he is part of Kim Jong-un’s tiny inner circle. [The two are not related.] He was also close to Kim Jong-un’s parents—Kim Jong-il, the late leader of North Korea, and  Ko Yong-hui—and even spent time as Kim Jong-il’s bodyguard.

He later served as Pyongyang’s chief military negotiator during inter-Korean talk from 2006 to 2008 and was appointed in 2009 as the first head of Reconnaissance General Bureau—North Korea’s main intelligence service. In 2012, he was briefly demoted from the rank of a four-star general to a lieutenant general after a number of North Korean spies were arrested in South Korea.

Kim has been a constant presence alongside Kim Jong-un as diplomatic efforts on the Korean Peninsula have gained moment in recent months. He participated in Kim Jong-un’s trips to China as well as the North Korean leader’s historic meeting with South Korean President Moon Jae-in at the Panmunjom truce village along the Demilitarized Zone on April 27. Now he is poised to become the highest-ranking North Korean official to visit the United States since 2000.

A polyglot who is fluent in many languages besides Korean, Kim has “a reputation of being difficult to work with and for not being properly deferential to his superiors,” according to North Korea Leadership Watch.

That side of Kim may be on display when he sits down with Pompeo for what are quite likely to be tough negotiations.  Kim and Pompeo have at least one thing in common: both men headed up their nation’s primary intelligence agencies. Pompeo served as director of the Central Intelligence Agency until Trump tapped him for the role of secretary of state in March.

In 2010, the Obama administration sanctioned North Korean officials and entities for supporting the Asian nation’s  weapons of mass destruction program. Kim was among the officials targeted.

Kim is also suspected of having a hand in the North Korean bombardment of Yeonpyeong, a South Korean island, on November 23, 2010. Four South Koreans were killed in that attack. He was also possibly involved in the cyberattack on Sony Pictures in 2014. Sony Pictures was reportedly hacked in retaliation for a comedy, The Interview, in which two journalists are recruited by the CIA to assassinate Kim Jong-un.

In 2015, then US Director of National Intelligence James Clapper, in a speech in New York recounted a testy exchange with Kim over a private dinner. Kim is “the guy that ultimately would have to okay the cyber-attack against Sony,” Clapper said, according to a Bloomberg News report.

Most prominently, Kim is believed to have orchestrated a deadly attack on a South Korean warship. On March 26, 2010, the Cheonan was struck by a North Korean torpedo while in the Yellow Sea. Forty-six South Korean sailors were killed.

While North Korea has denied any role in the sinking of the Cheonan, Kim has taken the criticism in stride. When North Korea prevented South Korean journalists from attending a K-Pop performance in Pyongyang in April, it was Kim who delivered a rare apology. “I’m Kim Yong-chol, the man you blame for sinking the Cheonan,” he said, before admitting, “It was wrong to hinder the free media coverage and filming.”

Preparing for the summit

The armistice was intended to serve as a ceasefire until a “final peaceful settlement” was reached. A peace treaty was never signed, which means that the two Koreas are technically still at war. At their April 27 summit, Moon and Kim pledged to end hostilities between their countries and work toward the “complete denuclearization” of the Korean Peninsula.

A Trump-Kim summit, meanwhile, has been among the most-touted events of the year so far. A meeting was set for June 12 in Singapore. It would be the first meeting between a sitting US president and the leader of North Korea. Recognition aside, Kim Jong-un—his regime crippled under the weight of international sanctions—is desperate for an economic lifeline from the United States.

While Trump himself played up the prospect of the summit, his supporters and Moon, the South Korean president, declared that he deserved the Nobel Prize for his efforts to bring peace to the Korean Peninsula.

Then Trump pulled the plug.

In a May 24 letter, Trump informed Kim Jong-un that he was forced to cancel the summit owing to the “tremendous anger and open hostility displayed in your most recent statement.” A North Korean vice minister of foreign affairs had earlier described US Vice President Mike Pence as a “political dummy.” But Trump also left open the door for a future summit. The North Koreans have been eager to seize this opportunity. Kim’s presence in New York is proof of that eagerness.

US officials have since been frantically scrambling to prepare for a Trump-Kim summit, which Trump has suggested will continue as planned—in Singapore on June 12.

In a tweet on May 29, Trump confirmed Kim’s role in the preparatory talks. He tweeted: “We have put a great team together for our talks with North Korea. Meetings are currently taking place concerning Summit, and more. Kim Young Chol, the Vice Chairman of North Korea, heading now to New York. Solid response to my letter, thank you!”

As Kim prepares for his meetings in New York, the world’s attention will once again be on him and his interlocutors—not to see if they talk, for that is the purpose of their meetings, but to see where all that talk leads.

Image: US President Donald J. Trump’s daughter, Ivanka Trump, was seated feet from North Korean Gen. Kim Yong-chol at the closing ceremony of the Winter Olympics in Pyeongchang, South Korea, on February 25. The two did not speak acknowledged each other. (Reuters/Lucy Nicholson)