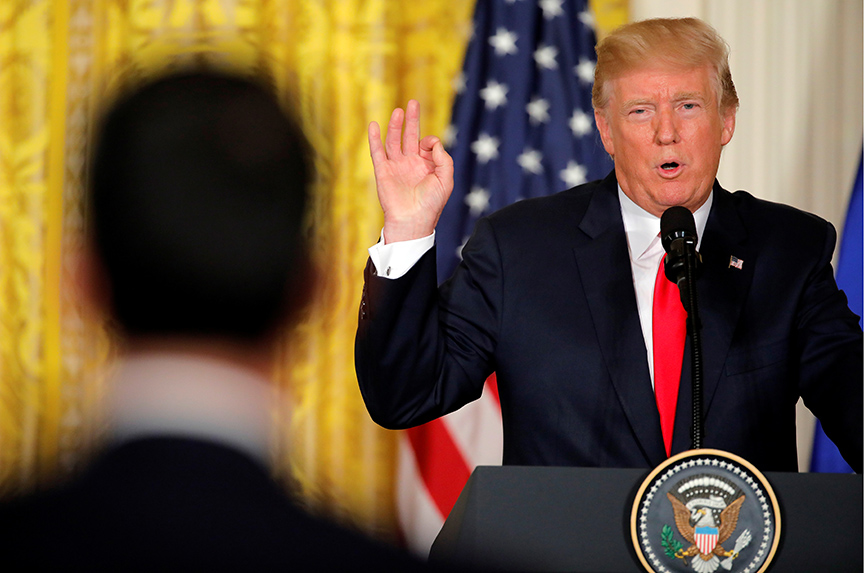 North Korea’s missile test over Japan on August 29 came “perilously close” to being an act of war; the question now is how will US President Donald J. Trump react, said the Atlantic Council’s Robert A. Manning.

In response to past North Korean missile tests, Trump vowed to rain down “fire and fury”  on the hermit kingdom. After the latest test on Aug. 29, he warned Pyongyang that “all options are on the table.”

“[North Korean leader] Kim Jong-un has threatened to fire missiles at Guam, but the North Koreans are very careful to calibrate their actions so that they fall just under the threshold that would force a US response. However, I think this time there is an accumulation of frustration and anger building in the White House,” said Manning, a resident senior fellow in the Atlantic Council’s Brent Scowcroft Center on International Security. Guam is a US territory and home to the United States’ Andersen Air Force Base.

Noting Trump’s past rhetoric on North Korea, Manning said: “The missile test is the equivalent of [North Korean leader] Kim [Jong-un] throwing a pie in his face.”

North Korea has only twice before fired missiles over Japan: once in 1998 and again in 2009. On both occasions North Korea said its rockets were carrying satellites; no such claim came after its latest test. Many Japanese now see the 1998 missile launch as their version of the attack by al Qaeda on the United States on September 11, 2001.

“This missile over Japan is in a league all of its own,” said Manning, who served as a senior strategist at the National Counterproliferation Center in the Office of the Director of National Intelligence from 2010 to 2012. Noting the unpredictability of North Korean missiles, he wondered how the world would have reacted if the missile had broken up over Hokkaido and killed Japanese civilians. The intermediate-range missile fell into the waters off Japan’s Hokkaido island.

“The challenge is: What kind of proportionate response is possible without risking wider escalation? That is the real dilemma,” said Manning.

Q: In what ways is North Korea’s missile test over Japan different from its previous tests?

Manning: This is a dangerous escalation of tensions. The North Koreans recently tested three short-range missiles; now they have fired what appears to be an intermediate-range missile over Japan in response to the US-Korean military exercises. This missile over Japan is in a league all of its own. It is a hostile act that gets perilously close to an act of war.

Kim Jong-un has said he will fire missiles at Guam, but the North Koreans are very careful to calibrate their actions so that they would fall just under the threshold that would force a US response. However, I think this time there is an accumulation of frustration and anger building in the White House.

Trump makes ridiculous tweets on how he would respond to North Korea. The missile test is the equivalent of Kim putting a pie in his face. Will Trump respond rationally? I don’t know.

This is an incredibly reckless act by North Korea. What if this missile broke up over Hokkaido and killed people? What would the response be then? The challenge is: What kind of proportionate response is possible without risking wider escalation? That is the real dilemma.

Q: Does the United States have any good options for dealing with North Korea?

Manning: The problem is that there is a disconnect between the immediacy of North Korea’s provocations and the timeline of our responses. We are going to have an emergency UN Security Council session; we will probably see even stronger sanctions adopted, but these take time to play out so it is very unsatisfying even if they work.

We need to go to the Chinese. Their priority is avoiding instability. I would argue that this kind of behavior by North Korea is a risk of instability on its own. At this point, the United States is justified to go to China and say “are you serious or not” about putting pressure on North Korea.

The Chinese need to enforce sanctions [on North Korea] and cooperate with us in doing so. There ought to be a US and/or UN monitor on the border, on the bridge at Dandong connecting China and North Korea. The Chinese always say they are doing things, but as Reagan said, “trust but verify.”

The Chinese don’t necessarily need to do more than they have signed up for, but they need to do 100 percent of what they have signed up for. We have seen too many Chinese businesses enabling North Korea, and then China protests when the US unilaterally sanctions Chinese businesses violating UN sanctions. That is one immediate action the [Trump] administration would be justified in demanding.

We also need to sit down with the Japanese and the South Koreans and figure out how to strengthen deterrence. If I were Japan, I would be saying publicly to North Korea that if anything like [the missile launch over Japan] were to happen again we are going to shoot it down.

Q: While President Trump and the North Koreans have been engaged in a war of words, how are US allies in the region—Japan and South Korea—reacting to this threat?

Manning: It is a mixed bag. On the one hand, a tough US response is reassuring to both Japan and South Korea. They want to see that the United States is paying attention.

On the other hand, we have seen statements by [South Korean] President Moon [Jae-in] that there is a fear that Trump may fly off the handle. The South Koreans are saying “we have a veto over any US strike,” which technically may not be respected. There is some tension there [between the United States and South Korea].

This is a problem from hell and there is no answer to it. Everyone is looking for a silver bullet and there isn’t one.

Q: US officials have raised the possibility of pre-emptive strikes on North Korea. What are your thoughts on such a strategy?

At any given day, there are probably 100,000 American citizens in greater metropolitan Seoul, not to mention twenty-five million Koreans. So, if you are likely to only destroy 15-20 percent of North Korea’s program, is it worth risking the lives of these people?

There is only one circumstance which could justify a preventive strike and that is if we have evidence that the North Koreans are preparing for an attack. All options really are on the table at that point.

There is going to be a temptation to have some kinetic response, but I think it is very hard to have a proportionate response that doesn’t risk escalation. Sanctions may work in nine, twelve, fifteen months, but they are not emotionally satisfying after an event like this that is really a step short of war.

Manning:  They may have nuclear weapons that they are capable of delivering. But the point of our policy for twenty-five years and part of the point of sanctions is to demonstrate that the world will not accept a nuclear North Korea.

Some people are now arguing that we should accept [North Korea as a nuclear weapons state]. I don’t think we are there, and certainly not there yet. Sanctions could have an impact on forcing them to rethink their behavior, or something could happen internally.

If you accept them as a nuclear weapons state then you are just blowing up the nuclear Non-Proliferation Treaty, and you have given a green light to everyone and their mother who wants to have nuclear weapons. It is not something you do lightly.

North Korea’s goal is to be Pakistan. They want to be recognized as a de facto nuclear state and treated like a normal country. I don’t believe the world is prepared to do that.

Kim clearly has no interest in talking about denuclearization. Their behavior is on a clear trajectory: he is hell-bent on getting an ICBM as quickly as possible. The real question to me is, what is his intention? He has achieved deterrence. They have missiles that can hit the United States. So, why does he want an ICBM? Is this about something more than regime survival?

Image: US President Donald J. Trump warned Pyongyang that “all options are on the table” after North Korea launched a missile over Japan on August 29. (Reuters/Carlos Barria)