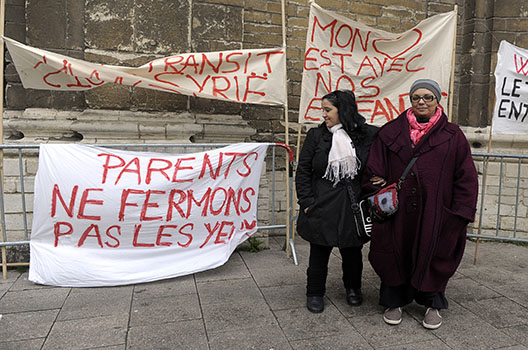 Female suicide bombers carried out more than 230 deadly attacks between 1985 and 2008, according to research conducted by Mia Bloom, the author of Bombshell: Women and Terrorism. Female terrorists, including the Chechen Black Widows, and members of the Liberation Tigers of Tamil Eelam (LTTE) in Sri Lanka and the Irish Republican Army (IRA), were responsible for about a quarter of all terrorist attacks in that period. And yet, women have been largely ignored when it comes to addressing the challenge of terrorism.
As NATO prepares for its summit in Brussels on July 11 and 12 and defines its strategic approach to the threats arising from the south, investing in building the capacity of women in counterterrorism (CT) and countering violent extremism (CVE) is fundamental.

Stereotyped assumptions that women have no place in warfare limit women’s agency in security operations and marginalize them from the political discourse on terrorism. The absence of a gender dimension in security, peace, and stability activities has forced women to sit on the sidelines of global stabilization and conflict resolution efforts.

Today, even the most conservative terrorist organizations, such as the Islamic State of Iraq and al-Sham (ISIS), are redirecting their propaganda to increasingly target, and inspire, women. In exchange for their involvement in terrorist activities, women are given a “potentially-never-fulfilled” promise to have a central role in the state-building process of the caliphate. Through the release of Al Shamikha, Al-Khansa, and Dabiq, all magazines skillfully packaged to attract women, both al Qaeda and ISIS are conveying to women a message of hope, opportunities, and rewards. As a result, extremism is becoming a form of female empowerment.

The 2017 EUROPOL Terrorism Situation & Trend Report (TE-SAT) observed that the increasing number of women involved in terrorist activities is an unprecedented phenomenon: “Female militant jihadists in the West perceive fewer obstacles to playing an operative role in a terrorist attack than men, and successful or prevented attacks carried out by women in Western countries may act as inspiration to others.”

The past decade has shown that peace-building, peacekeeping, and international development programs that employ a gender perspective and amplify the participation of women in decision-making are more effective. It is not just a numbers game, as the study undertaken by Sahana Dharmapuri clearly demonstrates. Women’s participation in cultural mediation, negotiation, and conflict resolution encourages the employment of a cross-sectorial approach, enhances awareness of the role different actors can play, and widens the breath of responses for appropriate actions.

Although CT and CVE are still novel fields for women, it is becoming evident that women play different, but equally important, roles: in families, communities, and public spaces as mothers, community/religious leaders (female imams), activists, political actors, and leaders.

In Pakistan, activist Mossarat Qadeem has a decade of experience deradicalizing extremists by working with legislators, religious leaders, and schools to talk young men out of committing suicide attacks. The organization she founded, PAIMAN Alumni Trust, has trained more than 655 mothers to deradicalize 1,024 young men and boys, rehabilitating them and reintegrating them into society.

In March 2015, Morocco implemented a nationwide program to train female imams, the Morchidates, to counter extremist interpretations of Islam. The program serves both to spread Morocco’s message of tolerant Islam and to enhance the role of women in a traditionally conservative domain.

In the Horn of Africa, Fauziya Ali, a female political leader, president of Women in International Security (Horn of Africa), and chair of Sisters Without Borders, leads successful programs to enhance African women’s socioeconomic and political empowerment, essential preconditions for preventing violent extremism in the region.

The use of women as change agents in CT/CVE is essential to reverse the current engagement deficit, tackle radicalization/terrorism effectively, and build societal resilience.

With its long-standing experience in capacity building and engaging with a diverse network of partners, NATO has the potential to play a pivotal role in this area. A successful approach to CT/CVE must include the broadest possible range of perspectives and actors in its programming and cannot be effective with half of the players left on the bench. NATO can contribute to the broader international effort to fight terrorism and violent extremism by linking counterterrorism programs to the Women, Peace and Security Agenda, with the NATO Summit presenting an opportunity to explore paths forward.

The recently established Hub for the South at the Joint Force Command in Naples and the Istanbul Cooperation Initiative Regional Center in Kuwait confirm NATO’s desire to enhance situational awareness and boost capacity building in the Middle East and North Africa, where the threat of terrorism and extremism are the strongest. Engaging women and women’s organizations in those areas, as well as promoting gender equality and women’s empowerment, would bring considerable benefits to NATO’s capacity building efforts and the overall CT agenda. If the international community can leverage the fundamental role women play in CT/CVE, it can assemble the necessary driving forces to defeat contemporary terrorism.

Diana De Vivo is the Executive Coordinator – Policy and Plans at NATO’s Communication and Information Agency. She is also a program officer for Young Professionals in Foreign Policy (YPFP) and a Member of Women in International Security (WIIS). Follow her on Twitter @dianadevivo.
NATO Security & Defense