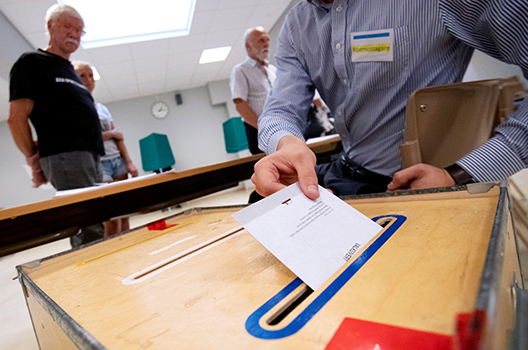 Global democracy has seen better days. Disruptive new technologies, demographic change, stagnant wages, and uneven economic growth are leading many citizens to question the effectiveness of democratic institutions and the usefulness of global cooperation. At the same time, authoritarian regimes around the world have become emboldened in recent years, directly challenging global rules, regional stability, and attempting to undermine democratic electoral processes. Former leaders from democracies around the globe now say it is time to fight for the principles of freedom, prosperity, and peace.

“There has been much hand-wringing about the state of democracy and the world in general,” Daniel Fried, a distinguished fellow in the Atlantic Council’s Future Europe Initiative and Eurasia Center, said. “The point now is to take action.”

On February 16, a prestigious group of bipartisan former leaders from democratic nations issued a Declaration of Principles to outline the shared values that underpin the rules-based international order and unite the democratic world. Released at the Munich Security Conference, the document is the product of a global bipartisan task force – organized under the auspices of the Atlantic Council and Canada’s Centre for International Governance Innovation (CIGI) – co-chaired by former US Secretary of State Madeleine Albright, former US National Security Advisor Stephen Hadley, former Swedish Prime Minister Carl Bildt, and former Japanese foreign minister Yoriko Kawaguchi.

“Free nations must adapt and change,” to regain the trust of their citizens, the Declaration argues, “yet our principles remain sound because they reflect the common aspirations of the human spirit.”

“For the past seven decades, free nations have drawn upon the shared values to advance freedom, increase prosperity, and secure peace,” Albright said. But the growing threat from actors who wish to reverse these freedoms, as well as growing skepticism of democracy’s value, she argued, means “it’s time for citizens around the world who care about these values to stand up and make their voices heard. We need to make clear what we stand for and what kind of world we want to live in.”

The Declaration affirms seven common rights that should be consider core to the global community of democracies: citizens must be able to live in free and just societies, to make their own electoral decisions without foreign interference, to live in peace and security, to engage in economic activity in free markets, to enjoy free and open access to global commons on a safe and healthy planet, to respect national sovereignty while at the same time upholding democratic principles and assisting others, and to cooperate with others in support of these democratic principles.

“The goal is to reaffirm support for the principles that have been at the foundation of the international order since the end of World War II: democracy; free, fair, and open markets; and the rule of law,” Bildt explained. “We cannot sit idly by while autocrats and demagogues undermine these core principles,” he added.https://www.youtube.com/watch?v=YLagdqojE9A

According to Fried, “the Declaration seeks to unite people around common principles, pushing back against the autocrats, aggressors, and demagogues who seem to think their time has come again.” He explained that “we can use the Declaration as a starting point to develop strategies and recommendations for the world’s democracies to fix the problems of our time, reforming the system without abandoning our values.”

The declaration, Atlantic Council senior fellow Ash Jain said, provides a “clear and compelling statement of values, a ‘north star,’ around which political leaders in democracies can coalesce to reaffirm shared values and mobilize public support behind them.”

While democracies need to stay united, Fried argued that they “also need to reach out to all nations willing to work with us, including China and Russia, to see whether we can develop at least some common ground on the rules.”

The Declaration marks the beginning of work to revitalize a rules-based order and shore up support for democracy around the world. Led by the Atlantic Council and CIGI, efforts will be made to engage politicians in the United States and other global democracies to obtain their support and encourage concrete actions to protect and promote these principles. At the same time, other global powers will be engaged in order to identify paths forward toward building a stable global order.

Throughout these efforts, there will be a constant commitment to the core principles that can bring about a better future. As the Declaration states: “we will defend our values, overcome past failures with new ideas, answer lies with truth, confront aggression with strength, and go forward with the confidence that our principles will prevail.”

Image: A ballot envelope is put in ballot box at a polling station in Tomelilla, Sweden September 9, 2018. (TT News Agency/Johan Nilsson via REUTERS)