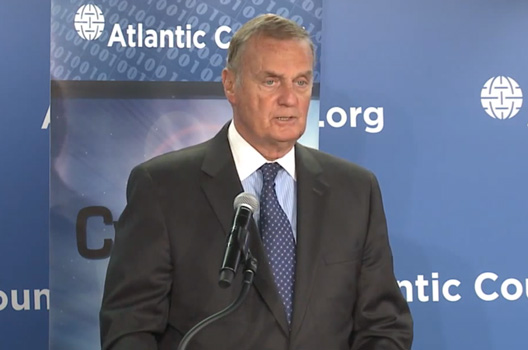 “Even if a deal is concluded, it is possible that an emboldened Iran free of sanctions will become more aggressive in supporting proxies in the region and continue to undermine the United States’ allies in the region,” said Jones, who is Chairman of the Atlantic Council’s Brent Scowcroft Center on International Security.

“Whether or not you like the P5+1 framework with Iran, no one will claim that it will solve all the problems in the Middle East or even resolve the mistrust and tensions between Iran and the United States and our allies, certainly not overnight,” Jones, who served as National Security Advisor in the Obama administration, said at an Atlantic Council Cyber Risk Wednesday series event that focused on the Iranian cyber threat.

A framework nuclear agreement “could actually enflame risk of major cyber conflict in the region,” he said, and with many obstacles still in the way of it becoming an actual deal “if the agreement fails, tensions are certain to escalate and with them the chances of broader escalation.”

Jones said it was possible that nervous US allies in the region may use their own cyber capabilities against Iran.

The Obama administration faces an uphill task of selling the so-called Joint Comprehensive Plan of Action with Iran to Congress and the United States’ friends and allies in the Middle East. Israeli Prime Minister Benjamin Netanyahu has called the agreement a “grave danger” that will “threaten the very survival” of Israel. Members of Congress, mostly Republicans, also oppose the deal.

The agreement increases the time it will take Iran to develop enough highly enriched uranium to build a bomb to at least one year by shutting off the main pathways for Iran to achieve this goal.

If it complies with the terms of the agreement, Iran will be rewarded with the phased removal of crippling sanctions imposed by the United States, the European Union, and the United Nations Security Council.

The details of a final agreement are to be worked out by a self-imposed June 30 deadline.

“Even if such an accord is reached later on this summer under the best of circumstances, the US and Iran will remain deeply mistrustful and opposed on many other fronts,” said Jones.

He cited some areas of friction, including Iranian support for Bashar Assad’s regime in Syria, its hostility toward Israel, and its support for terrorism and Zaydi Shia Houthi rebels in Yemen.

“Iran will seek to enhance its geopolitical dominance of the region,” said Jones.

Iran’s capabilities to launch cyber attacks represent a growing threat to the United States and its allies in the Middle East, he added.

Iran was the victim of a series of cyber attacks by the United States and Israel in 2010 in which the Stuxnet computer virus destroyed centrifuges at an Iranian uranium enrichment facility.

Iran has since been accused by US officials of unleashing its own cyber attacks, including on Saudi state oil company Aramco and the Qatari natural gas firm RasGas in 2012, and the Sands casino in 2014.

“China and Russia were long seen as the major strategic cyber threats to the United States,” he said. “It is clear that Iran has become a capable, motivated, and yet unpredictable cyber power.”

Image: “Even if a [nuclear] deal is concluded, it is possible that an emboldened Iran, free of sanctions, will become more aggressive in supporting proxies in the region and continue to undermine the United States’ allies in the region through cyber attacks, subversion, and terrorism," retired Gen. James L. Jones, Jr., Chairman of the Atlantic Council’s Brent Scowcroft Center on International Security, said April 8. (Photo courtesy YouTube)