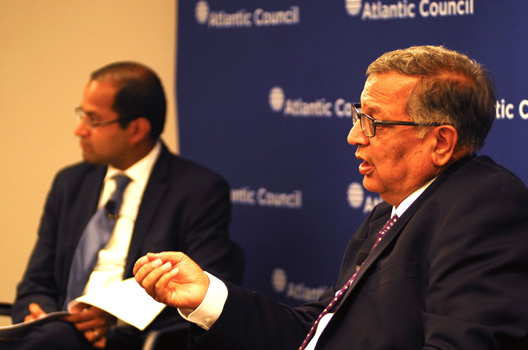 Retired Brigadier Arun Sahgal, one of India’s top experts on nuclear policy, reasserted his country’s “no first use” doctrine in a June 23 presentation to the Atlantic Council.

Sahgal, Director of the New Delhi-based Forum for Strategic Initiative, doesn’t represent official thinking, but he spoke from thirty-six years of experience in the Indian Army.

“India’s no first use posture is written in cement,” he said. “The bottom line is, India shall not attack first, but shall respond if attacked—and retaliation will be massive and designed to inflict unacceptable damage.”

Sahgal reasserted India’s position of credible minimum deterrence, which isn’t “country-centric” but “threat-centric.” He noted that “CMD is a function of assured and credible retaliatory capability. We are also taking into account the nuclear threat from China.”

Another key to India’s structure, he said, is that “the nuclear command authority is totally under civilian control. There is no oversight by the military, though it certainly forms part of the system.”

In effect, he said, India’s political leadership believes nuclear weapons are only useful as a political deterrent—and not a way to fight a potential war with Pakistan or anyone else.

“It is not one neighborhood we are concerned about. There are two: Pakistan and China,” Saghal pointed out. “There is an increased accent on developing credible and adequate C4I2SR [command, control, communications, computers, intelligence, information, surveillance, and reconnaissance] capabilities, and also because we have a no first use policy, there is a huge demand on OODA [observe, orient, decide, and act] flexibility.”

He added that “survivability and protection go hand in hand, backed up by robust communications and built-in redundancies.”

In the long run, Sahgal explained, “we have a commitment to the goal of a nuclear weapons-free world through global, verifiable and non-discriminatory disarmament.”

According to a position paper shared by Sahgal at the conference, “nuclear weapons shall be tightly controlled and released for use at the highest political level. The authority to release nuclear weapons for use resides in the person of the Prime Minister of India, or the designated successors. An effective and survivable command and control system with requisite flexibility and responsiveness shall be in place.”

Explaining that position, Sahgal said: “This means that—despite the fact that India has agreed not to strike first—it must have the flexibility for an adequate response. Therefore, operational planning has been done so that this capacity is built into the structure.”

“In India’s case, it will always be important and necessary, given the political dynamics of the country, that command must rest with civilian authorities,” he said, reiterating that his country does “not want to get into a free-for-all nuclear exchange with Pakistan.

“There is a nuclear targeting plan,” Sahgal warned without elaborating. “But the other side should realize one thing: it will be massive. The idea is to dissuade the other side from the idea that they can get away with it. We are trying to tell them that this whole thing is destabilizing. Don’t go down this road; it’s a no-win game.”

Image: Retired Brigadier Arun Sahgal, one of India’s top experts on nuclear policy, reasserted his country’s “no first use” doctrine in a June 23 presentation to the Atlantic Council. Sahgal is Director of the New Delhi-based Forum for Strategic Initiative. Photo: Larry Luxner