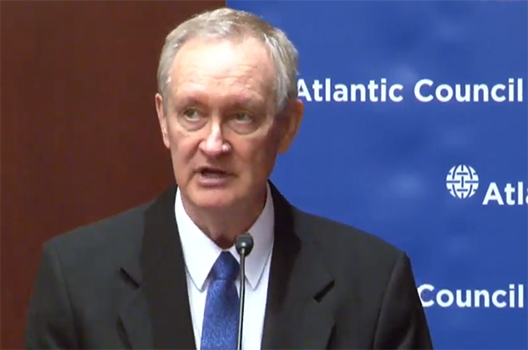 The potential for nuclear power plants to provide substantial emissions-free energy on a reliable and cost-effective basis will be key to addressing a range of challenges facing the United States, from climate change to economic competition, US Sens. Mike Crapo (R-ID) and Sheldon Whitehouse (D-RI) said on May 21.

Speaking at the launch of an Atlantic Council report, “US Nuclear Energy Leadership: Innovation and the Strategic Global Challenge,” at the US Senate Visitor Center in Washington, Crapo said that while “nuclear energy provides over half of our nation’s emissions-free energy… the United States is scheduled to lose a significant amount of its nuclear generation in the next decade.” Put simply, “Nuclear energy has been in need of a reboot for many years,” he said.

Crapo explained that the United States will face significant challenges in the next few decades, including from climate change, growing demand from developing countries, and security threats to energy infrastructure. “Other sources of power could accomplish one or two [challenges] on this list, but we cannot afford to let any one of these slide,” he said, adding that “nuclear is capable of addressing all of them, which is why it is critical that we continue to build up our nuclear capabilities in the United States. These challenges are daunting, but they are even more daunting without nuclear energy and without the US at the helm.”

Whitehouse specifically highlighted the benefits nuclear power will have in helping the United States lessen its dependence on fossil fuels and emissions-causing energy sources. Nuclear power, according to Whitehouse, “is going to be an important piece of the portfolio with which we come together to solve the climate change problem before it overwhelms us.”

Whitehouse lamented the decline of US nuclear production, driven by the closure of aging nuclear power plants, which are being replaced “with polluting gas-burning facilities when the only reason to do that is because there is an economic market failure with the market failing to recognize the carbon-free benefit of nuclear power.” The current decline of nuclear power and increase in fossil fuel production “is double bad policy,” he said. “It is bad economic policy and it is bad environmental policy.”

Both senators served as honorary co-chairs of the Atlantic Council’s Task Force on US Nuclear Energy Leadership, which brought together dozens of civil and military experts in foreign policy, defense, and nuclear energy to address the national security implications of the decline of US nuclear power. The Task Force’s report recommends that the United States’ current nuclear fleet be maintained and expanded, that a new regulatory environment be created to encourage innovation and new technologies, and that more emphasis be given to nuclear energy exports.

At the May 21 event, Atlantic Council President and CEO Frederick Kempe announced the launch of the Nuclear Energy and National Security Coalition, which will “continue upon the work produced by the Task Force.” The coalition will be led by Thomas Graham, Jr., executive chairman of Lightbridge Corporation, and Adm. (ret.) Richard Mies, president and CEO of the Mies Group, Ltd.

“We believe that US policymakers perhaps do not fully understand the importance of the US civilian nuclear program to US national security and the imperative of its reinvigoration,” Graham said. Mies added that “we can regain US leadership in nuclear energy if we act now and strongly.”

Robert Ichord, a senior fellow with the Atlantic Council’s Global Energy Center and the rapporteur for the Task Force’s report, explained that the United States still has a major opportunity to lead in the global nuclear power industry. “We are still the largest generator of nuclear power in the world,” he noted, adding that the United States’ “long operating experience, our excellent operating experience, has positioned us to play a key role in terms of the international organizations, the development of standards and requirements for safe operation, and for helping to deal with nonproliferation issues.”

Dale Klein, associate vice chancellor for research with the University of Texas system, conceded that the US domestic nuclear industry will take significant time and effort to recover as “any time a country stops production and construction for a long period of time, it is so difficult to get it regenerated in a timely manner.”

Jennifer Gordon, deputy director in the Atlantic Council’s Global Energy Center, suggested that state governments can play a critical role in jumpstarting the nuclear industry by “broadening the tent of what constitutes a renewable portfolio standard” in their climate change plans. By shifting language away from renewables and toward “a clean energy standard,” nuclear energy can begin to benefit from the clean energy subsidies afforded to other sources such as solar and wind power, she explained.

Crapo highlighted the benefits of the Nuclear Energy Innovation Capabilities Act, which he sponsored with Whitehouse. The Act, which was passed into law in 2018, will authorize “the creation of a national reactor demonstration center… and a versatile reactor-based fast neutron source in the United States, so that civilian users do not have to go to Russia or China for fast neutron irradiation capabilities,” Crapo explained.

Russia and China will also provide considerable competition for the United States on the growing international market for nuclear energy exports. “China and Russia loom large,” Crapo said, “offering heavily financed nuclear exports to emerging nations in need of more electricity. Thereby expending their global influence and cutting into ours.”

China has attracted considerable attention as it continues to build new reactors, but Jane Nakano, a senior fellow at the Center for Strategic and International Studies’ Energy and National Security Program, cautioned that China still has a very limited track record in exporting nuclear technology and has seemed to slow down its nuclear energy program after the 2011 Fukushima nuclear power plant disaster in Japan.

“China may pose the greater challenge in the long term,” according to Atlantic Council Senior Fellow Matt Bowen, “but at least right now, Russia is the country that is really dominating the export market.” While US production has waned, he explained Russia has been building new reactors for decades and “have been able to make some very attractive financing offers to other countries.”

Given the high stakes both for the United States domestically and the international energy market, Crapo maintained that “it is critical that Congress continue to build on this bipartisan momentum to lay the groundwork for a long-term national nuclear policy.” He said he was confident that “up here on this Hill where there is so much partisan battling going on, we are making nuclear power and our advances on nuclear energy a bipartisan measure.”