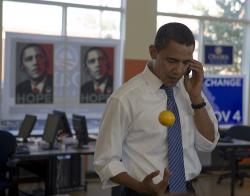 It seems that many of the fabled 300 foreign policy advisers to Barack Obama’s presidential campaign are more than a bit miffed to have been rewarded with hearty handshakes rather than plum positions within the administration.

Paul Richter for the LAT:

Now, with the national security jobs nearly filled, the Clinton team is dominating the senior ranks of the State Department and the Pentagon. U.S. Ambassador to the United Nations Susan Rice has the highest-ranking job for an Obama team member, but the post has not been traditionally considered a Cabinet-level position.

Steven C. Clemons, a foreign policy specialist at the New America Foundation, a Washington think tank, described the job scramble as a game of musical chairs in which the Obama squad members have often found themselves without a chair.  “If they’re not running into Hillary people, they’re running into Republicans,” he said.

Many of the Obama advisors are frustrated and indignant that after months of helping the campaign, they were thanked in November and directed to apply for a job on Obama’s change.gov website — along with hundreds of thousands of others.

One of the dismayed former advisors is Lawrence J. Korb, an assistant Defense secretary during the Reagan administration who answered the call to help the campaign a few weeks after it was formed in January 2007.
Korb, who works for the Democratic-affiliated think tank Center for American Progress, was co-leader of Obama’s military policy advisory team.  At one point after the campaign, Korb wrote a letter urging that some of the hardest-working members of his team be hired by the Obama administration. “I never heard back,” he said.

There’s no question that many campaign hands are now working in the administration and it’s reasonable to expect that more will follow.   But Obama has been pragmatic in his foreign policy approach, preferring to have the esteem of Establishment voices than the acclaim of his political base.   And, frankly, he can afford to disappoint a few dozen former enthusiasts.

It’s worth noting, too, that most senior level political appointments, especially in technocratic fields like foreign- and national security-policymaking, have historically gone to people with previous government experience.   Given that the last two decades have been under presidents named either “Clinton” or “Bush,” it’s not at all surprising that the appointments are coming from people who are either Republicans or Clintonites.