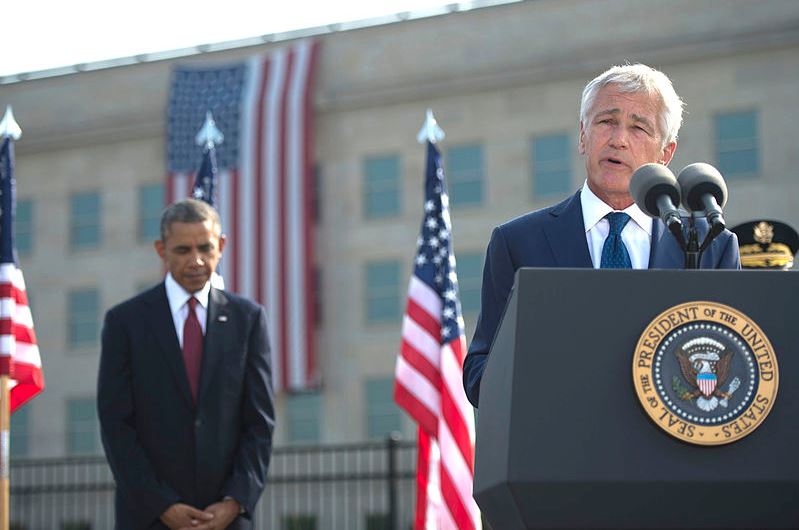 In the days since Defense Secretary Chuck Hagel resigned, two prominent candidates to replace him have said publicly they will not do so. They are former Undersecretary of Defense Michele Flournoy and Rhode Island Democratic Senator Jack Reed.

As President Barack Obama seeks a new appointee, the priorities for a defense secretary have changed since he selected Hagel, then chairman of the Atlantic Council, in February 2013, according to Barry Pavel, director of the Council’s Brent Scowcroft Center on International Security. The president probably will want a “wartime secretary,” Pavel said in an interview earlier this week.

Flournoy likely would have been a top choice for the White House, Pavel said. “The White House team is very comfortable with her. They know she’s a team player, they know she is well respected by the military. She would be the first female secretary of defense. Truth in advertising, she was my first boss in government and I just think the world of her. She is a role model par excellence.”

“A close second is probably Bob Work who is the current deputy secretary” of defense, Pavel said. “He has done a very good job and to fleet him up would be relatively easy. He was just confirmed as deputy secretary and I imagine it won’t be hard to confirm him as secretary. He has all of the qualifications that are needed.”

Pavel added that “another possibility is [Homeland Security Secretary] Jeh Johnson. Move him over from DHS to DOD, but that has its own tensions because then you have to find someone for DHS and the challenges and threats that DHS attends to are probably greater than at any time in a while, so maybe you don’t want to do that.”

Excerpts of the interview, with New Atlanticist’s Ashish Kumar Sen:

Q. Does Secretary Hagel’s resignation signal a shift in White House policy on Syria and Iraq?

Sometimes administrations reboot their team or part of their team when they want some fresh perspectives on things. When Secretary Hagel was nominated, even though it wasn’t that long ago, the highest priorities in the defense inbox were bringing the force structure down within increasingly significant fiscal constraints and working with Congress to manage that drawdown of forces as the budget constraints became more severe. And so, who better than Chuck Hagel to handle that set of tasks?

I think [Hagel] brings a worldview that this administration has adopted since Day One and that is a very realistic—and, in the case of Chuck Hagel, personal—appreciation for the limits of the employment of military power. This administration came into office thinking that the [George W.] Bush administration overused the military instrument. They wanted to rebalance the tools in the foreign policy toolbox and have diplomacy take relatively more of a role and defense take relatively less of a role. There, again, … was a very good fit with the administration’s priorities.

Now President Obama reluctantly finds himself as commander-in-chief of a new war and perhaps—this is speculation—this has led him to do this reboot. Recall that President [George W.] Bush did the exact same thing at exactly the same time in his tenure. I was actually part of that.

This week, eight years ago, almost to the day, I got a call to say: “You’ve got to fly to Kansas on Friday to meet with Robert Gates who is going to be the new secretary of defense to brief him up.” The strategy in Iraq needed a reboot and so they brought in Robert Gates. I don’t know if that’s the case for Secretary Hagel’s resignation, but I’m just saying this has happened before.

Q. So essentially the job description has changed?

Certainly the priorities that were foremost on the secretary of defense’s inbox were different than they are now. Now you’re looking for a wartime secretary, even though this is not a president who wanted to define himself as a war president. [Obama] has been thrust into this position and perhaps, again speculation, he would like a secretary of defense who is potentially well attuned to these new priorities.

Q. Do you see any connection between Secretary Hagel’s resignation and the criticism the Obama administration’s national security team has faced over its handling of ISIS and the Ebola outbreak?

We’re relying on a lot of reporting, which has questionable overall accuracy. The president is the decision-maker and if the president wanted to he could adopt whatever position he so chooses. I don’t think you get rid of advisors because an overall effort is not going well or is perceived as not going well.

My own view is we should have been much more robust regarding ISIS. I even wrote a blog in June that said here’s what we need to do right now. Unfortunately, the Obama administration waited until our consulate in Irbil [the capital of the Kurdish Regional Government in Iraq] was almost under attack to actually deploy forces and equipment. But that’s the way this administration seems to work. They wait until problems are upon us instead of acting preventively.

Q. What qualities should the president be looking for in a successor to Secretary Hagel?

I see three major tasks for the next secretary of defense and they all involve management. You need someone who can 1) manage the war; 2) manage the military and the budget; and 3) manage the White House well.

Second is continuing management of very difficult budgetary circumstances that the military has to set priorities to deal with.

And third, you have to have the confidence of the White House, make sure that there are good lines of communication and that your messaging in public is consistent with the White House, but that you have very frank and strategic discussions when you are behind closed doors with the president and the national security advisor. …


Q. Communication between the secretary of defense and President Obama’s inner circle seems to be a challenge.

It can be a challenge. You can read all 300 pages of it in [former Defense] Secretary [Robert M.] Gates’ book! Even with, for example, the Syria chemical weapons decision from 2013 reportedly the president made that decision on a walk on the White House lawn with his chief of staff and then later called the principals in to discuss it. It is certainly the president’s prerogative to do that, but to me that’s the kind of thing I would prefer to avoid where you are not consulting your most senior Cabinet-level officials on the most important national security matters you could possibly deal with, which is the employment of military forces.

Q. What will Secretary Hagel’s legacy be?

Maybe his legacy is what he was hired for, which is a relatively smooth process of managing forces and budgets under the sequestration and the budget control act. Maybe it was the Washington piece of this where he actually excelled and probably did as good a job as perhaps anyone might have been able to do.