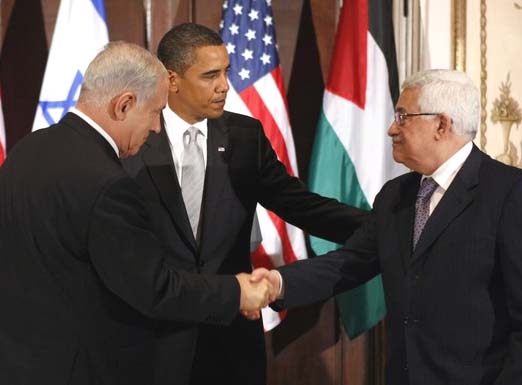 The ‘Arab Spring’ that is flowering in fits and starts in most countries of the Middle East has significantly altered the geopolitical situation in the region, and is likely to have a profound effect on American interests.

No one knows how or when the region will settle down, and there is little that the US can do to help shape events directly. Even in Libya, the US and other countries have been reacting, admittedly in a direct manner, rather than shaping the outcome of the struggle between Muammer Gadaffi and his opponents. This is all for good reason.

As a new Middle East has begun to be shaped by citizens in individual countries, one issue appears conspicuously unaffected, at least on the surface: the Arab-Israeli dispute over Palestine. Israelis and Palestinian leaders remain incapable or unwilling to talk seriously. It is wishful thinking that this situation can continue for long.

The US has more direct interests at stake in ensuring a lasting peace between Israel and Palestine than it does in the outcome in most other countries in the region. Remaining silent on deadlocked negotiations over a two state solution, while encouraging greater democratisation in other countries, suggests a double standard that damages America’s image in the Middle East and the broader Muslim world.

This is particularly true because the Palestinian issue stands out as the one issue in the Middle East where nothing can be accomplished without active American leadership, including that of President Barack Obama.

No other country can convince Israeli and Palestinian leaders to reach a binding compromise that results in two states living side by side in peace and security, ending the Israeli-Palestinian conflict and all claims related to it. Such an outcome would significantly increase Israel’s security, while resolving an issue that adversely affects America’s national security interests in the region.

Some argue that the uncertain situation in the broader Middle East is not a propitious time to re-engage on Palestine; that we should wait to see what new leaders arise and what their policies towards Israel might be.

Others argue that, facing reelection next year, Mr Obama should avoid personal involvement unless he is guaranteed of success, so as not to appear weakened or to offend domestic constituencies. These views do serious injustice to the interests of all the main parties, including those of the US.

Adding to these interests is that fact there is increasing international support to have the UN General Assembly declare in September a Palestinian state based on the borders of 1967. The US cannot block such a declaration; indeed it is likely to be isolated in its opposition (along with Israel). However, such a declaration, satisfying as it may be to those rightly frustrated with decades of failed negotiations, is likely to result in a deepened stalemate rather than the lasting peace devoutly desired by majorities in Israel and the occupied territories.

Resuming the Israeli-Palestinian peace process is not a matter of forcing concessions from Israel or dragooning the Palestinians into surrender. Most of the elements of a settlement are already agreed as a result of the ‘Clinton parameters’ of 2000, the Oslo Accords, and the ‘road map’ of 2003.

What is required is to summon the will of Israeli and Palestinian leaders, led by a determined American president, to forge the various elements into a conclusion that all parties have already publicly accepted in principle. Indeed, a broad-based Israeli group has just announced its ‘Israeli Peace Initiative’ that endorses these elements, and there is strong support from the leaders of Europe, especially Germany, France and the UK.

Thus the time has come for Mr Obama to lay out his view of the parameters of a fair and viable peace agreement. Four issues should be highlighted.

First, territory and borders should be addressed. Two states, based on the lines of June 4, 1967 with minor, reciprocal, and agreed-upon modifications as expressed in a 1:1 land swap is needed, to take into account areas heavily populated by Israelis in the West Bank.

Next, there has to be a solution to the refugee problem that is consistent with the two-state solution that does not entail a general right of return to Israel and addresses the Palestinian refugees’ sense of injustice, while also providing them with meaningful financial compensation as well as resettlement assistance.

Third, Jerusalem has to be made the undivided capital of both Israel and Palestine, with Jewish neighbourhoods under Israeli sovereignty and Arab neighbourhoods under Palestinian sovereignty. There should be a special regime for the Old City, providing each side control of its respective holy places and unimpeded access by each community to them.

Last, on the issue of security, Mr Obama must push for a non-militarised Palestinian state, together with security mechanisms that address Israeli concerns while respecting Palestinian sovereignty, and a US-led multinational force to ensure a peaceful transitional security period.

These parameters would serve as a basis for substantive and productive discussion by the parties to move the peace negotiations to a positive resolution. They would achieve priority US national security and foreign policy objectives with respect to the resolution of the Israeli-Palestinian conflict.

Also, they would fulfill the repeated urgings of the international community, including the Arab League and the Quartet (the UN, the US, the European Union, and Russia), that the US exercise determined and effective leadership as the chief facilitator of the Middle East peace process. The parameters should be part of a comprehensive and ambitious strategy designed to move the parties forward to a lasting agreement.

Of course, success is not guaranteed. By its very nature, no issue that requires a president’s direct involvement is. But many issues of importance to US national security interests depend on achieving lasting peace between Israel and Palestine.

The nature of the new Middle East cannot be known until the festering sore of the occupied territories is removed. Iran’s hegemonic ambitions, including its support for Hezbollah and Hamas, cannot be blunted as long as it is seen in the region as the champion of the legitimate aspirations of the Palestinians.

Syria and Lebanon will remain arenas of direct concern to Israel as long as there is no regional peace agreement. Relations with Saudi Arabia, already tested by the overthrow of Hosni Mubarak, likely would be strengthened if King Abdullah saw the US as moving in a serious manner to resolve the Palestinian issue.

There is no issue in the Middle East more deserving of the president’s engagement, both for US interests globally and for the stability of a vital region undergoing historic change. In June 2010, Mr Obama spoke eloquently in Cairo about justice and progress, tolerance and the dignity of all human beings. It is now time to use his office and prestige to bring peace to the Holy Land, uniting Israelis, Palestinians and Arabs in a lasting peace.

Brent Scowcroft is Chairman of the Atlantic Council’s International Advisory Board, former national security adviser to US presidents George H. W. Bush and Gerald Ford, and president of The Scowcroft Group, an international advisory firm. This essay originally appeared in the Financial Times.