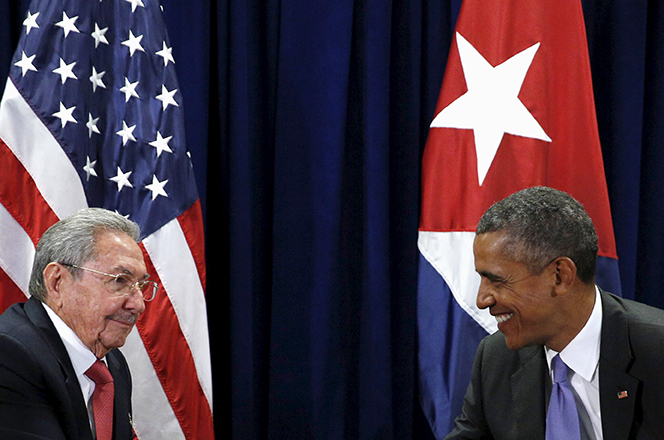 Most Americans, including Cuban-Americans, favor normalization of ties between the United States and Cuba, say Atlantic Council analysts

US President Barack Obama’s decision to make an historic visit to Cuba in March will have a negligible impact on the presidential election in the United States; if anything, it has succeeded in exposing just how out of touch critics of this engagement—particularly Republican presidential candidates Ted Cruz and Marco Rubio, both Cuban-Americans—are, according to the Atlantic Council’s two top Latin America analysts.

“Poll after poll that we have done, and that others have done, have shown that support for normalization crosses party, age, racial, demographic, and income lines,” said Peter Schechter, Director of the Atlantic Council’s Adrienne Arsht Latin America Center.

“Americans are way ahead of some of the hardliners in the Republican Party on this issue,” he added. “Senators Cruz and Rubio are both Cuban-Americans and so I fully understand their emotional connection to this issue, but politically it has no traction.”

Jason Marczak, Director of the Council’s Latin America Economic Growth Initiative, said what Obama’s trip—planned for March 21-22—has done is expose the “outdated viewpoints” of candidates like Cruz and Rubio.

“What polls have shown is that even Cuban-Americans increasingly want a new beginning,” he said.

Obama will become the first US President to visit Cuba since Calvin Coolidge made the trip in 1928. Rubio and Cruz have criticized the President’s decision.

The trip announcement came in the same week that the United States restored commercial flights to Cuba.

The United States and Cuba restored diplomatic ties and opened embassies in each other’s capitals in July of 2015. This rapprochement ended more than five decades of estrangement between the two countries.

Peter Schechter and Jason Marczak discussed Obama’s Cuba trip in an interview with the New Atlanticist’s Ashish Kumar Sen. Here are excerpts from the interview.

Q: What changes have you seen in the Castro government’s behavior since the normalization of diplomatic ties with the United States? Is that change irreversible?

Schechter: The historic normalization of ties between the United States and Cuba comes within the context of a slow, but very clear and purposeful reform in Cuba’s economy. That didn’t happen because of the normalization, but one hopes that because of the normalization it will accelerate. There are increasing private sector jobs—somewhere between 13 to 15 percent of the economy is now private sector jobs. These are limited in growth, capacity, and certainly in access to capital. These are usually small businesses called cuentapropistas.

Marczak: The growth of the private sector is a positive change. The lifting of the cap on remittances has allowed Cuban entrepreneurs to have greater access to capital. The announcement this week of possibly over 100 daily flights from the United States to Cuba will flood Cuba with US tourists, which will only result in more cuentapropistas having opportunities to start their own businesses, including bed and breakfasts now possible with Airbnb on the island. There will be more restaurants to serve tourists, and hopefully Cubans, and more small businesses to provide services to the Cuban population.

What we have seen from the Cuban government is a sign of interest in providing greater telecommunications opportunities to the Cuban people. You now have Cubans congregating on corners in Havana to access Wi-Fi hotspots. Minister of Trade Rodrigo Malmierca, when he was in Washington this week, recognized that businesses need Internet access, too. As you give businesses more Internet access it will give Cuban workers more access to free information. This is one of the best tools that we can give to the Cuban people that they have been denied for fifty years.

Q: On the issue of human rights, there has been an uptick in the number of arrests in Cuba. Why is that?

Schechter: Cuba is a police state. Unfortunately, the world is full of police states. There is no doubt that within the Communist Party of Cuba there are reformers and there are hardliners. We have to help strengthen the reformers. The reformers are the ones that advocate change, certainly economic change, and greater ties with the United States. The hardliners are advocating greater clamping down in light of more access to foreign money, tourists, and information. With greater opening, you are clearly going to get more opinions expressed, not just by dissidents, but by writers, artists, academics, and each of those points of view are going to come at some point into friction with those that have the hardest line in the Communist Party. What worries me is that the uptick in arrests is evidence that President [Raúl] Castro still has not sufficiently made his own objectives crystal clear so both sides feel that they can still coexist.

Q: Are the reformers on the ascendant as a result of this rapprochement with the United States?

Marczak: Cuba is undergoing profound change. This is a country that literally has changed at molasses speed for the last fifty years. All of a sudden you have this unprecedented opening. You are seeing this division among those who are very scared of change and those who recognize that change is critical for the survival of the Cuban state. For the Cuban system to continue there must be change because economically they are out of luck if they don’t change. That interplay between those two different sectors is playing out on the streets.

At the same time, Raúl Castro needs to show to his party and his people that he is still the man in charge and that even with these openings the government is the ultimate authority. That’s why we have had these continuing arrests. We should look toward the Cuban Communist Party congress in April to see how it is viewing the changes that have been undertaken in the last couple of years. That party congress will be instrumental in gauging the degree of change that the government will undergo in the next few years.

Q: In the US Congress, what are the prospects for ending the embargo? If the embargo is not lifted, what are the other areas where the United States can open up space to grow this relationship?

Schechter: In this year, the chances of Congress lifting the embargo are nil. We feel very strongly that the areas in which the President can still have a margin of operation to work with, with executive orders and within the law, are some of the financial aspects.

Cuba is highly limited in its access to capital for two main reasons. One is because very few private sector lenders are willing to lend to Cuba given the lack of economic reforms on the island. The second reason is because it is still unclear what transactions are permitted in dollars. Therefore, third-party non-American dollarized transactions are still in this hazy zone of legality or illegality.

We strongly believe that the Cubans and the Americans have a unique opportunity to try to give Cuba access to the best possible technical advice on how to reform its economy. The international financial institutions that are based down the street have done this with innumerable countries, bringing in countries that were previously isolated back into the global economic system.

The Inter-American Development Bank (IDB) is the largest of the regional banks and could be a politically palatable mid-term solution because the United States does not have a majority share in the bank. That might be the place where Cubans and Americans might start by finding a way to get membership and providing Cuban central bankers and economists with the technical knowledge of how to make some of the deep reforms to the economy that would give Cuba access to information.

Marczak: Cuban economists and others in the Cuban government have access to some outside advice right now, but it is not necessarily the right advice. Friends, like the Venezuelans, are clearly not doing it right. What the Cuban economy needs is the help of an impartial, multilateral institution that can give the kind of financial advice that Cuba needs to deal with some of the pressing economic changes.

Over the next ten months, before President Obama’s term ends, we need to think about what are the other things that he can do that would be irreversible under the next administration. Things like opening up flights. It will be very difficult to cut those flight routes. Also, you can’t kick Cuba out of the IDB once they become a member. This should be part of the fourth-quarter push that is so critical to solidify the historic actions that the President has taken over the last fifteen months

Q: What impact do you expect the Cuba trip to have on the US presidential race where some candidates—Ted Cruz and Marco Rubio, in particular—are opposed to warming ties?

Schechter: I expect the trip to have a negligible impact on the race. Poll after poll that we have done, and that others have done, have shown that support for normalization crosses party, age, racial, demographic, and income lines. This is a non-issue. Americans are way ahead of some of the hardliners in the Republican Party on this issue. Senators Cruz and Rubio are both Cuban-Americans and so I fully understand their emotional connection to this issue, but politically it has no traction.

Marczak: The trip is exposing the outdated viewpoints that certain candidates like Senators Cruz and Rubio have on Cuba. This is important not just for Cuba; our interactions with Cuba have broad implications for our relations with Latin America and the rest of the world.

We can’t look at this trip in isolation; it’s not just about Cuba and its eleven million people. It is a trip that shows a new positioning of US foreign policy and how it is important to engage with those with whom you may not agree on everything.

What the trip will definitely do is elevate Cuba to be an issue on the campaign trail. But few will vote for or against a candidate based on their Cuba position. What polls have shown is that even Cuban-Americans increasingly want a new beginning.

Q: How will President Obama’s visit to Cuba play out in Venezuela?

Marczak: The Venezuelans have already seen the writing on the wall over the last sixteen months: that Cuba is doing everything it can to diversify beyond Venezuela. The trip is a blow to [Venezuelan President] Nicolás Maduro and others in the Venezuelan regime that have tried their best to keep Cuba in Venezuela’s orbit. This means discouraging any type of engagement with the United States.

The more Cuba engages with the United States, the less it is dependent on Venezuela. Venezuela needs the Cuban doctors to whom it pays horrifically low wages. The Venezuelans have become reliant on Cuban services at a time when there has been a brain drain from Venezuela itself.

Schechter: There is no sign that the Cubans coordinated or even communicated with the Venezuelans before making the decision on President Obama’s trip. This will indeed isolate the Venezuelan regime even more. This is not necessarily good news. Venezuela is on the brink of a serious social calamity and a paranoid regime that feels itself encircled is going to react in ways that are unpredictable and potentially dangerous to any increasing opposition. I am very concerned with how this will impact the psychology of leaders in Venezuela who will feel themselves increasingly in a corner and may see violence as a way to get out of that corner.

Image: US President Barack Obama met Cuban President Raúl Castro at the United Nations General Assembly in New York on September 29, 2015. Obama will travel to Cuba on March 21 becoming the first US President to make the trip since Calvin Coolidge visited in 1928. (Reuters/Kevin Lamarque)