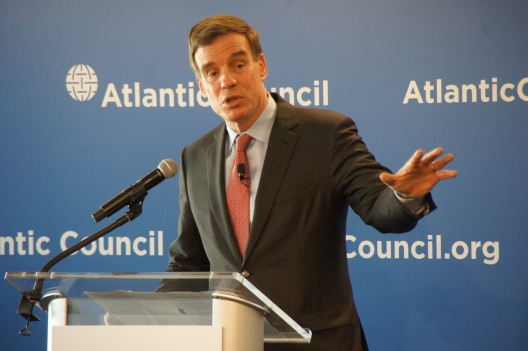 President Barack Obama’s visit to New Delhi this month presents an opportunity to “regenerate, restart, and revitalize” the bilateral relationship with India, according to Senator Mark R. Warner, co-chairman of the bipartisan Senate India Caucus.

Obama will become the first US president to visit India twice while in office when he travels to New Delhi to be the chief guest at the country’s Republic Day celebrations on January 26. The trip comes four months after Prime Minister Narendra Modi visited Washington for two days of meetings with Obama at the White House.

“With the prime minister’s visit and now this, I think, very generous offer to invite the president on Republic Day, we ought to take this moment of renewal and turn it into concrete action,” Warner, a Virginia Democrat, told the Atlantic Council on January 16. Warner will travel with the president to India.

As it rebalances its Asia policy, the Obama administration has sought to forge a stronger bond with India, but the bilateral relationship has suffered problems. These have included differences over intellectual property rights, disagreements in global trade talks, a stalled civilian nuclear deal, and differing positions on Russian President Vladimir Putin’s annexation of the Crimean Peninsula in March.

Warner acknowledged that he is concerned about India’s unwillingness to be critical of Putin’s actions in Crimea and Ukraine.

“Strategically, the US and India are drawn together by strong common interests in counterterrorism, cyber threats, a stable Afghanistan, and a newly assertive China, but our differences are also very much on public display,” Huntsman said. “A bilateral revival is exactly what is needed.”

The US-India relationship has transformed dramatically since the Cold War ended at the start of the 1990s. “We would pretty much all honestly agree that this relationship that has gone from virtually non-existent 25 years ago to this enormous period of collaboration, friendship. Then as the relationship matured there were bumps,” said Warner. “I think we [have] turned that corner.”

The United States and India could improve their collaboration on cyber-security and the technical development of India’s skilled work force, Warner suggested. He also outlined steps he said India’s government could take to improve ties. These include:

“On our side of the table,” Warner said, Congress should increase the number of H1B visas issued each year for skilled workers. And both sides need to resolve disputes over intellectual property rights, he said, calling them “a perennial thorn in the side for US companies doing business in India.”

Impediments to trade, Warner said, include India’s use of defense “offsets”— a requirement that India’s vendors in the defense sector invest significant portions of their India earnings back into India’s economy. Also, he noted, the US-Indian civilian nuclear deal, signed in 2008, has stalled in India over liability issues.

In response to a question from Bharath Gopalaswamy, acting director of the Atlantic Council’s South Asia Center, on how to manage expectations in the relationship following Modi’s election last summer, Warner replied: “We went through such a period where everything was somewhat frozen, at least celebrating these small wins, I think, is important. I think we have now got some of those wins in the bank for both countries.”

The Obama administration has worked hard to mend ties with Modi, which were strained over communal rioting in the state of Gujarat in 2002 while Modi served as its chief minister. More than 1,000 people died in the riots, many of them Muslims attacked by Hindu nationalists who have formed a core of Modi’s political base. After India’s National Human Rights Commission criticized Modi for failing to stem the riots, the administration of President George W. Bush revoked his US visa in 2005.

Atlantic Council director and former undersecretary of state Nicholas Burns echoed the calls by Warner and Huntsman for a revived US-India relationship, writing last week in a Boston Globe column. But he also noted concerns in both India and the United States “about Modi’s ties to the extremist Hindu nationalist movement the RSS (Rashtriya Swayamsevak Sangh).”

Warner, who in his remarks praised Modi’s charisma, charm, and intellect, said he has been pleased with the tenor of the prime minister’s comments and the makeup of his Cabinet.

“In many ways, the overwhelming victory that the prime minister had [in the elections] was, in my sense, an embracement of his energetic economic record,” he said.

Gopalaswamy noted that a poll conducted in India after the elections found that 83 percent of the respondents had voted for a reformist economic agenda.

Ashish Kumar Sen is an editor with the Atlantic Council