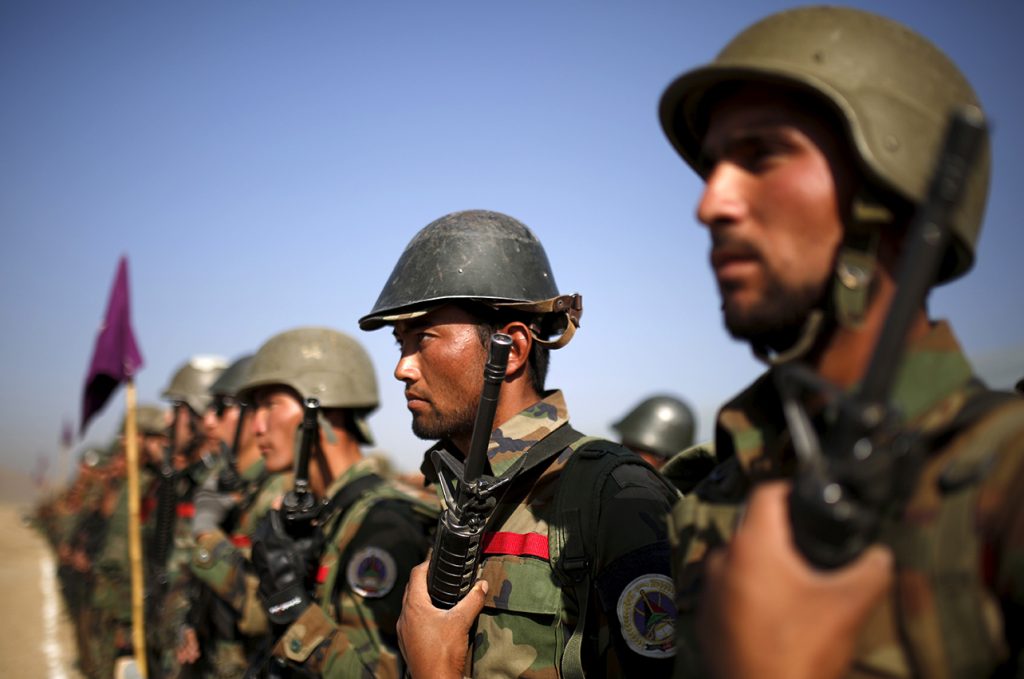 The United States should not further reduce its military and intelligence presence in Afghanistan. Doing so will undermine Afghan security forces and “vitiate” the US’ counterterrorism mission in an important part of the world, said James B. Cunningham, a former US Ambassador to Afghanistan.

“A force deployment isn’t like switching on and off a light switch,” Cunningham, who is a Senior Fellow at the Atlantic Council and the Khalilzad Chair, said in an interview.

“The force that exists there now was sized to do the train, advise, and assist mission… to perform force protection, and to support the counterterrorism and intelligence missions that exist,” he said.

“Unless the situation changes—and the violence of the Taliban at the moment indicates that it might not—it seems to me at least that those missions are still going to have to be performed for some time into the future,” he added.

US President Barack Obama, who has vowed to end the US war in Afghanistan by the time he leaves the White House in 2016, is reportedly reconsidering his decision to pull most of the US troops out of Afghanistan by the end of 2016.

In March, Obama acquiesced to a request from Afghan President Ashraf Ghani to slow the pace of the withdrawal. Obama announced that he would leave 9,800 US troops in Afghanistan until the end of 2015. He had earlier planned to keep only 5,600 soldiers there by December.

In a new paper, Afghanistan and US Security, Cunningham writes that withdrawing US troops at this juncture would jeopardize Afghan National Security Forces’ chance to succeed and “vitiate the US counterterrorism mission in Afghanistan.”  Sen. John McCain (R-AR) and Sen. Jack Reed (D-RI) are sponsors of the paper that has been endorsed by a bipartisan group of more than thirty former US officials.

The debate over troop numbers coincides with the Taliban’s brief capture of the northern Afghan city of Kunduz. After quickly seizing control of Kunduz in September, the militants announced on Oct. 13 that they had withdrawn from the city.

The Taliban offensive in Kunduz is a clear indicator of the militants’ attempts to test the will of the Afghan security forces to defend their country, Cunningham said in a separate Atlantic Council conference call.

The Taliban suffered a setback over the summer when it was confirmed that their reclusive leader, Mullah Omar, had been dead for two years. The appointment of Omar’s longtime deputy, Mullah Akhtar Mansour, as the new leader exacerbated divisions within the group that the Islamic State of Iraq and al-Sham (ISIS), also known as Daesh and ISIL, has sought to exploit.

While advocating for a steady US presence in Afghanistan, Cunningham also put the onus for this maintaining this commitment on the Afghan government.

“Support for Afghanistan will remain pretty firm as long as Afghanistan’s partners continue to see progress” by the government in Kabul, he said.

James B. Cunningham spoke in an interview with the New Atlanticist’s Ashish Kumar Sen. Here are excerpts from our interview.

Q: Why is it important not to pull more US troops out of Afghanistan at this stage? And what do you believe is the appropriate number of US troops that need to remain in Afghanistan?

Cunningham: The recommendation in our paper is to maintain the force levels and presence in the country at or close to current levels, along with the intelligence assets. That basically means maintaining the status quo based on the missions that exist and the roles that those forces are serving, and leaving further decisions to the next administration as it reviews the situation and what it wants to do.

The force that exists in Afghanistan now was sized to do the train, advise, and assist mission with contacts in the regions where our partners are also deployed, and in Kabul, to perform force protection, and to support the counterterrorism and intelligence missions that exist. Unless the situation changes—and the violence of the Taliban at the moment indicates that it might not—it seems to me at least that those missions are still going to have to be performed for some time into the future. If the situation on the ground changes markedly for the better then one can downsize the force more rapidly.

Q: What can realistically be achieved by maintaining US troops at the current level?

Cunningham: US troops will continue to carry out the missions that they have been carrying out. They have proved essential both over the longer term in the continuing improvement in the Afghan forces, but also when an emergency occurs, such as in Kunduz, there are capabilities to assist the Afghan forces. The counterterrorism mission is unfortunately going to have to continue for some time. The Afghans can’t do that by themselves. That requires both military and intelligence assets.

The other day, for instance, there was a target of opportunity in the Kandahar region to go after some al Qaeda training camps, according to press reports. The Afghans were able to take advantage of that. Those are the kinds of capabilities we want to have so our commanders and the Afghans have the flexibility to deal with all of these challenges.

Q: What’s at stake if US troop levels are cut?

Cunningham: The signatories of the paper don’t think that the original goal of moving to a Kabul-only presence—a normal embassy presence—by the end of 2016 is advisable under today’s circumstances.

Reductions in forces, if there are any, need to be looked at in terms of what missions those forces are performing now that we shouldn’t be performing in the relatively near future. A force deployment isn’t like switching on and off a light switch. Once you decide to remove forces within a specific timeframe that becomes the job of the force—to remove itself. It’s not like you can maintain a capability until Day A and suddenly on Day B it’s gone. They start giving up their mission as they start reconfiguring to withdraw so those capabilities are lost well in advance of the time that the force actually leaves the country.

Q: What should be the key elements of a US policy that would give Afghanistan a real shot at success?

Much of what exists now—the threat of the violence, the fissures in the Taliban, the increasing profile of ISIL/Daesh in Afghanistan and in Pakistan, the Pakistani campaign against terrorists on their side of the border—didn’t exist a year and a half or two years ago. So we need to be adjusting our approach as the situation on the ground changes.

Q: Is ISIS exploiting the rift in the Taliban?

Cunningham: From the amount of contention that is still going on within the Taliban and from what you can see about the conflict between representatives of Daesh and the Taliban, particularly in Nangarhar province, there are certainly new areas of conflict opening up. Part of what could be happening with this wave of increased Taliban violence is an attempt by the new leadership to demonstrate its credentials. It appears that much of what the so-called Daesh presence is about is really Taliban who have rebranded themselves as Daesh for a variety of reasons.

Q: What are some of the steps that the Afghan government needs to take to justify a continuation of the present level of US engagement?

Cunningham: As a practical matter, as well as a matter of political wisdom, the Afghan government needs to register achievements, it needs to perform, it needs to made sure that their own people know what progress they are making, what steps they are taking, and what plans and programs they have going forward. The international community has to see that as well. Support for Afghanistan will remain pretty firm as long as Afghanistan’s partners continue to see progress. Americans and our many partners want to see results. They want to see that the continued personal sacrifice and investment that we are making in Afghanistan are a good investment and producing results.

Q: How will a further drawdown of US troops affect the Afghan National Security Forces at this time when they are being tested by the Taliban and ISIS is looking to put down roots in Afghanistan?

Cunningham: The Afghan forces are good. They have been fighting a determined fight. They have been taking a lot of casualties. And they haven’t folded when they have suffered setbacks. They will continue to get better as long as they get the support that they need.

There again there is the dynamic of the Afghan security forces being increasingly able to stand on their own and a lower level of international support, and that is as it should be. There are capabilities that they may lack, or are building, that they will not have for the next year or year and a half in intelligence, command and control, close air support, where a continued, limited support, particularly from the United States, will be necessary. If they don’t have that support they will not be able to perform those functions. That will erode their confidence as well their ability to perform when the time comes.

Q: Is Pakistan doing enough to support Afghan efforts to defeat the Taliban and eliminate safe havens for groups such as the Haqqani Network? What should it be doing to be seen as a credible partner in a peace process?

Cunningham: There needs to be more concrete expression of turning rhetoric into reality. They aren’t, in my judgment, doing enough to obstruct and degrade the ability of the Afghan Taliban and the Haqqani Network to plan and organize on Pakistani territory. One of the recommendations of the paper is that the international community needs to develop a strategy for bringing Pakistan along to match action with rhetoric, and to take concrete action in the safe havens against people who are operating from their territory.

It’s a very complicated subject. We have been grappling with this for a number of years. If the Afghans are going to get to an actual peace discussion with the Taliban this issue needs to be addressed. The Pakistanis can be helpful, not just in obstructing the freedom of the Taliban but also in encouraging discussions between the Taliban and the Afghan government, which they have helped to do in the past and I hope that effort can be resumed, as [Pakistani] Prime Minister [Nawaz] Sharif has indicated, in the near future.

Q: What can the United States do to incentivize Pakistani support for the peace process?

Cunningham: We and our international partners together ought to be able to come up with a process and a means to provide incentives, but also to provide disincentives for inaction. That is a discussion that I hope we can have with our international partners and all the countries that have a stake in the region, so we can find effective ways to encourage Pakistan to take the kind of actions we would like it to take.

Pakistan acted with determination and resolve in the [military] campaign [against militants] in North Waziristan [agency in Pakistan that abuts Afghanistan], but more needs to be done to build up a genuine and effective partnership between Afghanistan and Pakistan on dealing with the threat to both of them.