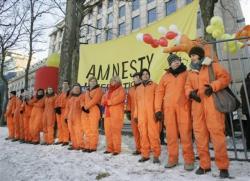 Like his erstwhile opponent for the White House, John McCain, President-elect Barack Obama spent the last two years condemning the existence of the Guantánamo Bay detention camp and promising to close it if elected. Now, however, he’s hedging his bets a bit.

Appearing on “This Week” with George Stephanopoulous, Obama admitted that he can’t simply order the place closed.

STEPHANOPOULOS: You also agreed on Guantanamo when you say you want to shut it down. You say you’re still going to shut it down. Is it turning out to be harder than you expected, will you get that done in the first 100 days?

OBAMA: It is more difficult than I think a lot of people realize and we are going to get it done but part of the challenge that you have is that you have a bunch of folks that have been detained, many of whom who may be very dangerous who have not been put on trial or have not gone through some adjudication. And some of the evidence against them may be tainted even though it’s true. And so how to balance creating a process that adheres to rule of law, habeas corpus, basic principles of Anglo American legal system, by doing it in a way that doesn’t result in releasing people who are intent on blowing us up.

STEPHANOPOULOS: So not necessarily first 100 days.

OBAMA: That’s a challenge. I think it’s going to take some time and our legal teams are working in consultation with our national security apparatus as we speak to help design exactly what we need to do. But I don’t want to be ambiguous about this. We are going to close Guantanamo and we are going to make sure that the procedures we set up are ones that abide by our constitution. That is not only the right thing to do but it actually has to be part of our broader national security strategy because we will send a message to the world that we are serious about our values.

Running for president is a lot easier than actually being president.

Guantánamo is a problem as a symbol because of the Bush administration’s decision to use what they called “extraordinary measures” and others, Obama and myself included, call “torture” at the facility.  Photos of abusive treatment got out and undermined our efforts around the world immeasurably.    Indeed, the Bush administration long ago admitted the damage done and the president himself has said that shutting down Gitmo and housing the prisoners elsewhere would be best. For reasons Obama listed above and others, though, it’s easier said than done.

Give Obama credit for having the good sense to simply admit that at the outset rather than allowing himself to be hamstrung by silly campaign pledges.  And for observing the spirit of his promise, if not the pace. AP‘s Lara Jakes reports,

Advisers to President-elect Barack Obama say one of his first duties in office will be to order the closing of the U.S. military prison at Guantanamo Bay.  That executive order is expected during Obama’s first week on the job — and possibly on his first day, according to two transition team advisers. Both spoke Monday on condition of anonymity because they were not authorized to speak publicly.

William Glaberson and Helene Cooper have a longish piece in today’s NYT on the logistics involved and why it may take a year or more to executive the order, which they report is expected to come next Wednesday, Obama’s first full day in office.