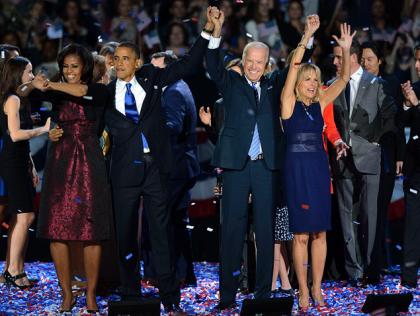 If 2008 was an economic storm election to lose, 2012 could be (could be) the election to win with a US economy predicted to grow at 3 percent next year with three million jobs being created over the next four years. What is truly remarkable is that the president held together a coalition of young white suburbanites, women, and urban minorities to get re-elected in what is still an instinctively center-right country. Certainly, this US election has profound lessons not just for Republicans and conservatives but also for Europeans.

The first lesson for Europeans concerns the growing political gap in western societies between old and young, men and women, whites and minorities. Women, who make up 54 percent of the US electorate, voted 55 percent for Obama. Albeit a chronic generalization, the message from American women seems to be that at a time of economic crisis they want more government not less. They also reject the machismo pain is gain logic of fiscal discipline and austerity which may make financial and economic sense over the longer term, but causes suffering in the short term. Those preaching fiscal common sense clearly failed to resonate with many in an America facing a fifteen trillion dollar deficit and soon to peer over the edge of a fiscal cliff which come 1 Januarycould cut 4.7 percentage points off the US economy, and see taxes soar and public services savagely cut.

The second lesson concerns the impact of changing demographics on the vote in all Western societies. In the US the white vote is now down to 72 percent. In most European countries it is between 80 and 85 percent but given immigration it is heading in a similar direction. For conservatives it means they can no longer hold onto their 1950s view of society and for all the frictions and failings of fifty years of the liberal experiment it has created a society that whilst fairer is grossly uncompetitive. As globalization bites, that decadent reality will become ever more apparent. For progressives immigration might work in the short-term because it shifts the ‘class’ vote in their favor but at the cost of social cohesion that is now a distant memory. It also reinforces a culture of dependency on government which is economically unsustainable.

There is another third and potentially more dangerous lesson. It seemed possible at midnight Washington time that a candidate might win the presidency but lose the popular vote for the second time in twelve years, seriously undermining his legitimacy as president. At electoral day’s end the candidate who wins the most votes should be the one who is elected. There are several countries on both sides of the Atlantic where too often a leader is elected on a minority vote, not least my own country, Britain. Semantic and sophisticated arguments can be made to justify this but over time all that happens is the growing alienation of a large minority who believe the systems works against them. Alienation is a real threat to European democracy already under threat from centralizing EU technocrats and Euro-federalists.

There are also aspects of this vote that are peculiarly American. No US president has ever been elected with unemployment over 7 percent as it is today. Obama won as much on charisma as policy, which was very hard to discern on either side. His charisma and celebrity made contact with the lives of millions of ordinary Americans in a way that a billionaire white, wooden opponent too close to irresponsible, greed-stricken extremist capitalism simply did and could not. Democrats should and will rejoice but they should also remember that Obama is a one-off political phenomenon. Four years hence it will be back to Washington business as normal…almost.

Sadly, it is the precisely the mix of extreme capitalism and the politics of entitlement implicit in this election that has led Europe to the edge of the abyss. America (like Europe) is today a society unable to face the hyper-competitive facts of globalized economic life and one in which capitalism red in tooth and claw is championed. How and if that contradiction is resolved will define Americans (and Europeans) in the coming age. There can and must be no return to some form of sweat shop economy but nor can Americans or Europeans defy economic gravity. Rather, the political class left and right must seek a new balance between competitiveness and compassion, between government and civil society, between liberty, responsibility and entitlement to sustainably pay for the values that Americans and Europeans share and which not only define who we are but what we stand for together in the world.