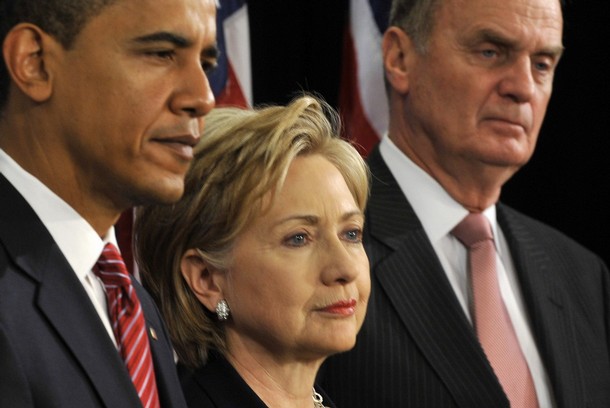 Samantha Power, Obama foreign policy advisor who was forced to resign after calling Hillary Clinton a “monster” during the heat of the Democratic nomination battle, will be working closely with Clinton, AP reports.

Officials familiar with the decision say Obama has tapped Power to be senior director for multilateral affairs at the National Security Council, a job that will require close contact and potential travel with Clinton, who is now secretary of state. NSC staffers often accompany the secretary of state on foreign trips.

Power was an early and ardent Obama supporter until the “monster” comment forced her off his campaign, but she was rehabilitated after the election when she made a gesture to apologize to Clinton and was included in the transition teams for both the State Department and the U.S. mission to the United Nations. At the time, an official close to the transition said Power’s “gesture to bury the hatchet” with Clinton had been well-received. Power and Clinton have met at least once since Clinton’s confirmation last week when they both appeared at a State Department ceremony at which Obama announced the appointment of special envoys to South Asia and the Middle East.

Clinton and Power are grownups who understand the nature of political campaigning, so this is probably less of a big deal than the reporting would indicate.   That said, it further heightens interest in a question that many have been asking themselves as the Obama foreign policy team shapes up:  Will Clinton be a powerful Secretary of State or will Obama run his foreign policy from the White House through National Security Advisor Jim Jones and his team?   Most of the speculation I hear is betting on the latter.

Both Jones — who served as the Atlantic Council’s chairman immediately prior to taking the post — and Clinton gave up very good positions to take their jobs.  Jones was almost certainly paying more in taxes from his various private sector positions than he’ll earn in the administration and Clinton was a very influential player in the Senate.  One presumes they both received assurances that their voices would be heard in shaping policy before signing on.

Realistically, one or the other will dominate.  My money’s on the general.