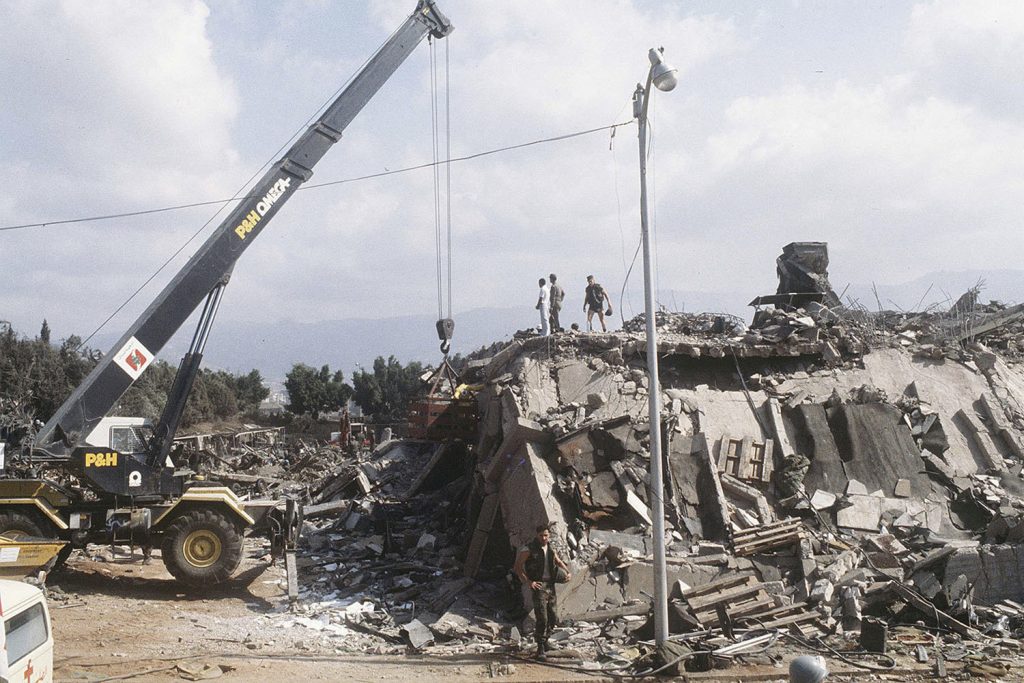 Thirty-six years ago today, the headquarters of the US peacekeeping force in Lebanon was destroyed in an act of unconventional warfare commissioned by Iran, supported by Syria, and executed by the Lebanese adjunct of Iran now known as Hezbollah. In the words of the United States Department of Defense investigatory commission, “a truck laden with the equivalent of over 12,000 pounds of TNT crashed through the perimeter of the compound of the US contingent of the Multinational Force at Beirut International Airport, Beirut, Lebanon, penetrated the Battalion Landing Team Headquarters building and detonated. The force of the explosion destroyed the building resulting in the deaths of 241 US military personnel.”

Then as now (with the recent downing of a US drone and a missile attack on Saudi oil facilities), the United States opted not to respond militarily to an Iranian attack.

Thirty-six years ago, the Reagan administration accepted the investigatory commission’s erroneous finding that the attack was an act of “terrorism,” because “no attempt was made to seize Marine positions or drive Marines from the airport.”  Labeling it “terrorism” rather than what it was—an act of unconventional warfare commissioned by a state seeking to drive the United States from Lebanon—put the bulk of the onus on a shadowy collection of Lebanese criminals instead of where it belonged: on Iran and Syria. And when the United States withdrew its forces from Lebanon in early 1984 without first punishing the perpetrators with significant military retaliation, Iran in particular drew the conclusion that it and its agents could target Americans with impunity. And they did.

More recently, Iran seems to be drawing the same conclusion from a US policy of loud talk and no stick in a region where Tehran is recklessly active. One need not support the Trump administration’s unilateral withdrawal from the 2015 nuclear deal to be deeply concerned about the destabilizing effects of Iran believing it can act militarily with impunity so long as the United States (not Israel) is the adversary. No doubt Tehran expected to be hit hard after downing a drone over international waters. But it was not, thereby fully justifying the most reckless of the Islamic Republic’s operatives. Those operatives no doubt had an easier case to make to the supreme leader when they counseled a missile strike on Saudi oil facilities. Again, US passivity rewarded their aggression.

Thirty-six years ago, an administration in Washington, in a classic case of mission creep, allowed a peacekeeping mission in Lebanon to long outlive its usefulness, and actively counseled US peacekeepers to avoid the appearance of their headquarters and barracks becoming that of a fortified military installation. The result was a flatbed Mercedes truck driving straight through the front door, into the lobby, blowing the building off its foundation and bringing it straight down. Iran, Syria, and local Lebanese were responsible for the deadly, unprovoked attack. US official incompetence enabled it.

More recently, an administration in Washington, already militarily passive in the face of Iranian militarism, suddenly decided to liquidate the most important piece of leverage in its hands for frustrating Tehran’s takeover of Syria. The sudden decision to abandon territory in northeastern Syria recently liberated (at great cost) from the Islamic State of Iraq and al-Sham (ISIS) and to abandon a partner force that had carried the brunt of ground combat for nearly five years is a gift of great value to Iran and to the Syrian regime it sustains. It was given freely, with no concessions demanded or even expected of US adversaries. Friends and foe alike are drawing damning and destabilizing conclusions about the backbone and reliability of the United States.

The needless deaths of 241 Americans in October 1983 and the ill-considered expectation of a “cake walk” in Iraq nearly twenty years later would combine, in the minds of many Americans, to create the belief that the United States can do nothing right in the Middle East; that it is a place of “sand and death” best left to its inhabitants and their neighbors. This explains why there is a large constituency in the US electorate supportive of President Trump’s objective, if repelled by his methodology.

Yet there was nothing inevitable about leaving Marines all-but-defenseless in October 1983. No one forced the Reagan administration to blame what happened on mysterious, shadowy “terrorists” instead of focusing on states determined to kill Americans and making sure they paid painful prices. There is nothing mandatory about passivity in the face of Iranian militarism in 2019, and there is nothing in international law dictating that the United States make massive military and diplomatic concessions—amounting to surrender—for nothing in return. Indeed, the sacrifice of reputation has been gratuitous and profoundly dangerous.

Perhaps the surprise attack of October 23, 1983 would have registered in Washington as a Levantine version of Pearl Harbor if only Iran and Syria had used their air forces to bomb the building to the ground. Instead they employed a Lebanese driver to deliver the requisite ordnance, temporarily disguising their roles and averting a appropriate responses. The events of October 1983 (including a parallel attack on the French peacekeeping headquarters) reverberate today, as Washington doubles-down on radiating the impressions of weakness and thoughtlessness in a part of the world already dangerously unstable; a region where the worst actors behave recklessly in the belief they enjoy full impunity.

Image: A crane is brought in after the explosion of the Marine Corps building in Beirut, Lebanon October 23, 1983. REUTERS/US Marines/Handout via REUTERS