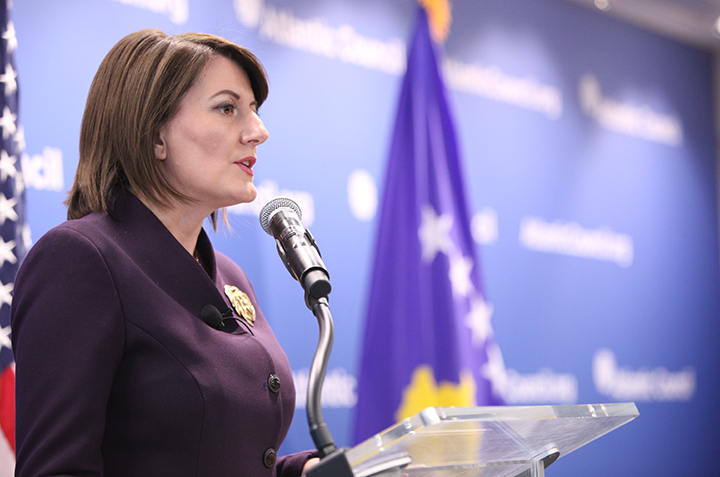 Kosovo’s President, Atifete Jahjaga, has called on governments in countries facing the threat of Islamic terrorism to set aside political differences and ramp up intelligence sharing and cooperation with their neighbors.

“The moment has come when we need to act,” Jahjaga said in an interview on March 23.

Jahjaga spoke on a visit to the Atlantic Council a day after terrorists attacked Brussels killing at least thirty-one people and wounding more than two hundred others. Belgian authorities identified two brothers among the three suicide bombers and said a manhunt was underway for at least one other person who participated in the attacks. The Islamic State of Iraq and al-Sham (ISIS) has claimed responsibility for the attacks, just as it did with the Paris attacks on November 13, 2015.

Kosovo has grappled with the challenge of foreign fighters as its citizens have left to join militant groups fighting across the Middle East. Delving into her country’s experience, Jahjaga, a former Deputy Director of the Police, noted that Kosovo has dramatically reduced the number of Kosovars leaving to fight alongside groups like ISIS and the Nusra Front in Iraq and Syria.

In the past two years, more than five dozen terrorist suspects have been arrested, and illegal mosques and NGOs, which Jahjaga said served as fronts for terrorist organizations, have been shut down.

“I seek more cooperation from countries, particularly on intelligence, which is the key to our success in tackling this phenomenon,” the President said.

Kosovo, which unilaterally declared independence from Serbia in 2008, has been recognized by the United States and all except five European Union nations. Kosovo and Serbia reached a landmark agreement in April of 2013 to normalize ties—a condition for both countries advancing on the path to EU integration.

The European Parliament in January gave its consent to the EU-Kosovo Stabilization and Association agreement, a key first step in Kosovo’s integration into Europe. However, Jahjaga warned about enlargement fatigue setting in within the EU. This fatigue has been compounded by the multiple crises facing Europe, including historic levels of migrant flows.

“The European Union should not be using the excuse of the refugee crisis in order to put a hold on the enlargement policy toward the aspiring countries of the southeastern part of Europe,” said Jahjaga.

“We are half way. We do not seek short cuts,” she said. “We are ready, as countries individually or as the region in general, to fulfil all of the requirements, to complete all of the reforms, and to do all of the necessary homework, which is in front of us.”

Jahjaga, Kosovo’s first first female President, will leave office in April. She will be succeeded by Foreign Minister Hashim Thaci.

Atifete Jahjaga spoke in an interview with the New Atlanticist’s Ashish Kumar Sen at the Atlantic Council’s offices in Washington on March 23. Here are excerpts of our interview.

Q: NATO has been leading a peace-support operation in Kosovo—the Kosovo Force (KFOR)— since June of 1999. What is your reaction to Donald Trump’s suggestion that the United States cannot afford to fund NATO anymore?

Jahjaga: Usually I do not comment on statements of the others, but every statement has to have some background and context. KFOR has been and continues to be one of the most trusted institutions in our country. It enjoys the trust of all of the community groups in Kosovo no matter their ethnic or religious backgrounds. NATO’s presence has been and continues to be the guarantor of peace and stability for our country.

Q: In light of the terrorist attacks in Paris and Brussels, what lessons can countries like Belgium learn from Kosovo’s experience in cracking down on foreign fighters?

Jahjaga: Every country has a different approach, but in this global threat that is imposing more and more danger to our countries, to our people, I think we don’t have the luxury any more of doing the necessary analysis and thinking about what we should do. The moment has come when we need to act.

We need to act by taking the lead in our countries and in our regions, but we also need to act through a proper level of cooperation, collaboration, and sharing of information, particularly intelligence information, among our countries. We have to sometimes leave political differences aside and be more focused on cooperating more to offer our citizens the basic requirement, which is their safety and security.

Kosovo has been one of the leading countries in the Western Balkans and even in the rest of Europe that within two years was able to decrease in the maximum the number of foreign fighters that had been leaving our country to go to Syria or Iraq to join ISIS or al Nusra or any other terrorist organizations. We have arrested, so far, over sixty-one Kosovar citizens; we have shut down illegal mosques and NGOS that have been operating as recruiting or front organizations for financing or indoctrination. This has to be country led effort and there should be a swift response in order to put a sealed door to some of the activities that there is a danger might be expanded.

I seek more cooperation from countries, particularly on intelligence, which is the key to our success in tackling this phenomenon.

Q: Five EU states do not recognize Kosovo. What impact has this had on your country at a time when Europe is confronting major challenges and cooperation is vital?

Jahjaga: The non-recognition for Kosovo is not because of Kosovo’s relations with those countries. It is mainly due to the internal matters of those countries. On top of this, these countries have been, on the other side, supportive of the EU agenda and the EU perspective of Kosovo.

Out of five countries [that don’t recognize Kosovo], three do have a liaising office in Pristina and they have accepted the travel documents or the passports of Kosovo. We do have a good country relation with Slovakia, Romania, Greece, [but] still with Spain and Cyprus there is a stiff relationship between our countries.

[These relationships] do reflect into security. We need to raise ourselves above the political agenda and the administrative bureaucracies that sometimes we have a tendency of putting before our actions. We have no time for this. We need to rise above this and look more into [providing] our citizens with the services that they do need.

Q: You warned against EU enlargement fatigue to which the migrant crisis has contributed in part. What are the consequences of such fatigue?

Jahjaga: The refugee issue is very fresh and close to our hearts and minds as the people of Kosovo. We, as countries, have a tendency of addressing the consequences before we address the source of the problem. The time has come that we deal with the source of the problem. The source of the problem is what is going on now in that part of the world which is producing high percentages of refugees who are in search of safe havens for themselves and their families. These people never wanted to leave their homes. I know from our own examples. We need to create the conditions for them to be able to return, as soon as possible, to their homes.

The European Union should not be using the excuse of the refugee crisis in order to put a hold on the enlargement policy toward the aspiring countries of the southeastern part of Europe. We are half way. We do not seek short cuts. We are ready, as countries individually or as the region in general, to fulfil all of the requirements, to complete all of the reforms, and to do all of the necessary homework, which is in front of us. I think that we are in that moment that we have no luxury of seeing when is the right moment. Now is the right moment that the European Union should look at the rest of the region not as a burden on their integration process, but as an added value toward the EU integration process because this is what we are setting up as countries in that region and fulfilling all of the requirements so that we can be an added value toward EU integration, not a burden toward EU integration.

Q: Kosovo is facing a political crisis, with the opposition critical of an EU-brokered deal with Serbia to give more rights to local Serbs. What challenges is the dialogue with Serbia posing to Kosovo?

Jahjaga: We have started the process of a dialogue four years ago under the facilitation of the European Union and with strong support from the United States. We consider that dialogue is the only alternative that is going to not only normalize the relation between both our countries, but is also going to accelerate the EU integration process for both of our countries. It is also going to open up much-needed requirement for foreign and European investment in that part of the region, particularly for our two countries.

But I have to be very open that when we go back into the process of dialogue, not so much attention is being paid to the implementation of the agreement that has been reached so far between Kosovo and Serbia. That is due to the lack of commitment by Serbia to fulfil and implement everything that they have agreed to. Their EU integration process should be clearly and carefully measured by the progress of the implementation of the agreements that they have reached in Brussels in the relation to Kosovo because that is the only evidence that would be able to see tangible results into that process of the dialogue among our countries.

Yes, indeed, Kosovo is facing a political stalemate between the [government] and the opposition and we are trying everything possible to find the middle way, to find the institutional solutions to all of their requirements, not only for the sake of the opposition, but more for the sake of the future of our country and the proper legacy that we want to leave for future institutional standards to be followed.

Image: “The European Union should not be using the excuse of the refugee crisis in order to put a hold on the enlargement policy toward the aspiring countries of the southeastern part of Europe,” Kosovo’s President Atifete Jahjaga said in an interview with the New Atlanticist on March 23. (Atlantic Council/Victoria Langton)