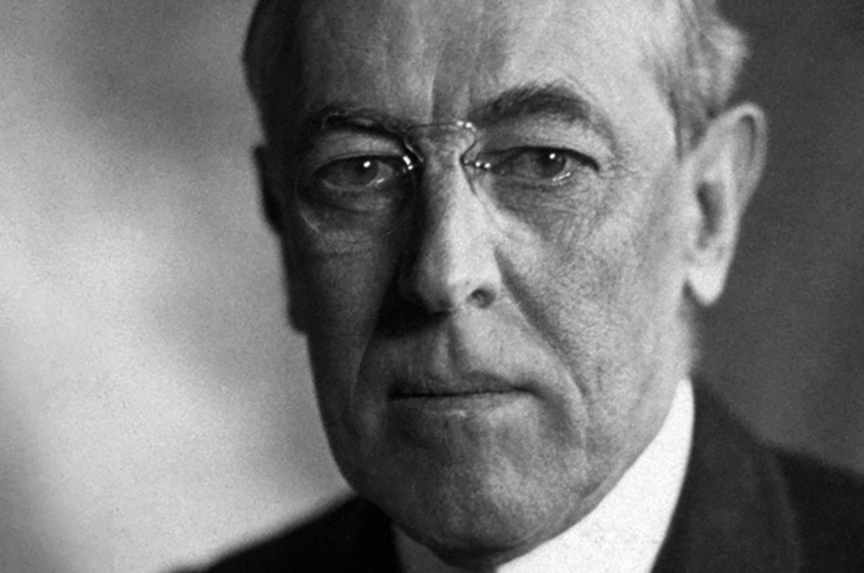 On November 11, 1918, World War One, the Great War, ended. Amid the chaos that followed—revolution, the fall of empires, and rise of nations—the United States attempted to build a rules-based world which favored freedom. American power had won the war, and President Woodrow Wilson was trying to shape a peace along the lines of what we now call a rules-based or “liberal” world order. Wilson’s Fourteen Points, presented the previous January, challenged the imperial, balance-of-power system of the European powers (on both sides) which had started the war, and at the same time took on Lenin’s revolutionary alternative. Wilson’s ideas were a rough draft of American Grand Strategy in what has been called the American Century.

The Fourteen Points included freedom of navigation and “equality of trade conditions” (instead of closed economic empires); qualification of (though not yet an end to) colonialism; welcomed post-war Germany and post-revolutionary Russia into the new system if, but only if, they respected its rules; welcomed the emergence or re-emergence of national states in Central and Eastern Europe, such as Poland; and called for a League of Nations to enforce the peace.

The Fourteen Points were not abstract “idealism” or charity, but reflected canny assumptions, that:

Historians have not been kind to Wilson or the Fourteen Points. They have fairly noted the inconsistencies, hypocrisies, and nasty unintended consequences of Wilson’s outline of US global leadership. Self-determination is easier stated as principle than put into practice. Wilson’s racial bigotry, awful even for his time, is a hard mark against him.

And yet. Consider the Fourteen Points against its competition: Lenin’s world socialist revolution or French Prime Minister Georges Clemenceau’s great power system. Given that, Wilson’s vision of a rules-based, liberal world order, aka the Free World, stands up well 100 years later.

In Wilson’s view, the United States’ interests and its values are indivisible. Arguably, US foreign policy ever since has been a struggle between this bold thesis—shared by Wilson, Franklin D. Roosevelt, Harry S. Truman, and Ronald Reagan—and the traditional view that nations have neither permanent friends, merely interests, and that the demands of balance of power and realism trump values.

The narrow view of US purposes in the world—usually called isolationism—was responsible for US withdrawal from European and world leadership, which left the field open for dictators and another world war. In the wake of that disaster, the United States returned to its Grand Strategy. After 1945, the United States put it to work in the part of Europe still free to rebuild and strengthen the Western democracies. After 1989, the United States extended the institutions of the Free World throughout Europe. Since the end of World War II, the West and much of the world have enjoyed the longest period of great power peace in history, with unprecedented prosperity and democracy.

But if things have gone so well, why do things seem so bad? The West faces aggression from Vladimir Putin’s Russia and challenges from China. More alarming are doubts and divisions from within, including the West’s questioning of its own model and values.

These challenges have been years in the making. Economic stresses are one source. Another is concern about national identity in a time of increasing ethnic diversity, which has generated nativist reactions.

Policy responses from mainstream political parties on both sides of the Atlantic appear inadequate, at least judging by electoral blowback, and a perceived failure of political systems is generating reaction against what many thought were settled fundamentals.

In the United States, this reaction includes elements both familiar and ugly. US President Donald J. Trump’s skepticism about Europe recalls earlier America First arguments from before the attack on Pearl Harbor in 1941. Some politicians’ language against immigration, legal as well as illegal, parallels nativist, even racist arguments from the 1920s. Praise for Putin and other authoritarians recall early right-wing sympathy for Benito Mussolini. Trump sometimes seems to dismiss values as bunk, in favor of the bottom line, another American tradition. The struggle between broad and narrow US strategic concepts remains with us.

The United States’ current political debates have their parallel throughout Europe.

What should guide the United States as it begins the next hundred years of its Grand Strategy?

US leadership is essential. The alternative isn’t pretty, as we discovered the last time we tried to withdraw from our responsibilities.

Leadership to what end? Security? Commercial advantage? Certainly. But how do Americans achieve those valid ends? What is the deeper US national interest? What does it mean to defend, as Trump urges, American sovereignty?

The West and the world are composed of sovereign nations. Patriotism is a good thing. That thought was integral to the Fourteen Points. But sovereignty and the nation are not absolute. They are qualified by responsibility before higher values. The Declaration of Independence makes that clear. Values are no luxury or artifice. As Abraham Lincoln observed, the American nation exists through common values rather than common blood. Thus, we support, in our better moments, a rules-based international order reflecting these common values. The alternative—indifference to values and deference to power—was tried and found wanting. Happily, we also learned that a rules-based world can work for our bottom line. The foundation of the American Grand Strategy remains valid.

This is not to minimize the challenges, whether from rejectionist powers like Russia or from an ambitious and potentially aggressive China or other authoritarian powers, or from economic stresses, environmental degradation, climate change, and a host of other problems. The right strategic principles won’t spare us from bad decisions (the Vietnam or Iraq Wars come to mind), nor are they protection against over-extension.

The principles of a rules-based order do not give us answers to these and other problems. But they are a place to start.

The United States should build on what we have achieved in the hundred years since the first draft of our Grand Strategy, working with those friends with whom we achieved it. With our allies, we have the power still to tackle challenges both acute and long term, recalling the linkage between our interests and our values. As the saying used to go, that’s the American way.

Daniel Fried is a distinguished fellow in the Atlantic Council’s Future Europe Initiative and Eurasia Center. He played a key role in designing and implementing US policy in Europe after the fall of the Soviet Union. As special assistant and National Security Council senior director for Presidents Clinton and Bush, ambassador to Poland, and assistant secretary of state for Europe, Fried crafted the policy of NATO enlargement to Central European nations and, in parallel, NATO-Russia relations, thus advancing the goal of Europe whole, free, and at peace.