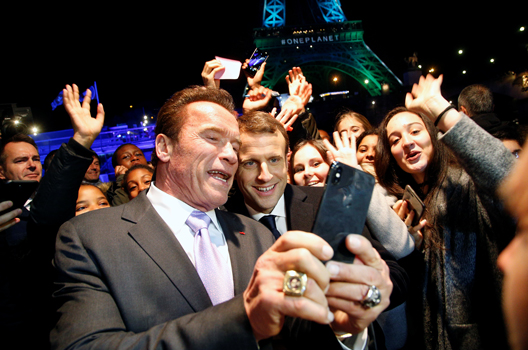 French President Emmanuel Macron (C) and R20 Founder and former California state governor Arnold Schwarzenegger (L) take a selfie with young people in front of the Eiffel Tower illuminated in green, aboard a boat cruising on the Seine river back from the One Planet Summit, in Paris, France, December 12, 2017. Picture taken December 12, 2017. (REUTERS/Thibault Camus/Pool)

French President Emmanuel Macron’s decision not to invite the United States to a recent climate action summit in Paris sends a clear message that other countries will happily step into the void the United States has created.

Two years after the signing of the Paris Agreement, Macron once again convened climate leaders in France’s capital to call for global climate action at the One Planet Summit on December 12. In a nod to 2015, heads of state and ministers from countries around the world, along with representatives from multilateral development banks, international organizations, and the private sector gathered in Paris to focus on challenges related to climate adaption, mitigation, and mobilization.

However, unlike 2015, one country was noticeably absent—the United States. As a result of US President Donald J. Trump’s decision to withdraw from the climate agreement, the administration did not receive an invitation. Further, it has expressed little interest in participating in the growing global conversation—and action—on climate change.

While the Trump Administration was not in attendance, summit participants included high-level representatives from the United Nations, the European Commission, the African Development Bank, and the World Bank; private sector representatives from HSBC, BNP Paribas, and Suez; as well as ministerial-level participation from countries from Canada to the Marshall Islands to China to Mexico to Ethiopia, all engaged on how to address the challenge presented by climate change.

The Summit, referred to by some as “Macron’s moment to make the planet great again,” has garnered international attention. In addition to underscoring the French president’s commitment to climate, the decision not to invite the United States is indicative of his approach to and relationship with the United Stated following the Trump administration’s announcement to walk away from the Paris deal.

Rather than dwell on the potential for the US withdrawal to stall progress in meeting the Paris Agreement goals, Macron has continued to beat the climate drum, notably responding to Trump’s announcement with an offer of funds for climate scientists to conduct their research in France with support from the French government. On December 11, Macron awarded the first of the long-term research grants to eighteen scientists, thirteen of whom are from the United States, including University of Texas at Austin-based researcher Camille Parmesan.

Macron’s offer and continued efforts to catalyze global action to counter climate changemany hope to assume the helm of technological leadership the US has long held. This was made clear by several of the comments made by government representatives at the Summit, including those from Mexico and Austria, emphasizing that the fight against climate change represents a huge business opportunity.

In addition to pursuing business opportunities, countries are also seizing the opportunity to implement policy initiatives.

During the Summit, Canada, Colombia, Costa Rica, Chile, and Mexico announced a joint commitment to carbon pricing in the Americas, pledging to implement carbon pricing—charging for the emissions of carbon dioxide—and ultimately link their carbon markets. Through working groups, participating entities will work to facilitate carbon pricing, and increasingly work to align pricing systems and integrate markets across jurisdictions. While the United States remains on the sidelines, US states California and Washington joined the pledge, along with several Canadian provinces, including energy-rich Alberta.

At the Summit, California Governor Jerry Brown (also joined by former Governor Arnold Schwarzenegger), emphasized the continued commitment of California and other US states to climate action, saying in an interview that “we are all in.”

In addition to discussing the legacy of the Paris deal set forth two years ago, and the policy changes needed to make good on the Agreement’s goals, the Summit emphasized one key component—or rather enabler—of climate action in cities, states, and countries around the world: finance.

Financing the implementation of policies to achieve their Paris goals is a key concern for many developing countries, and indeed for many of the state and local actors looking to step up their efforts and searching for the resources with which to do so. Many of the multilateral development banks (MDBs) in attendance discussed the progress made and the work yet to be done to develop and disseminate innovative climate finance models. President of the European Bank for Reconstruction and Development Suma Chakrabarti, who spoke on behalf of all MDBs present, called the need for further innovation in financing “paramount.”

While the US administration has turned away participation in global climate finance efforts, other actors are just ramping up. A spate of announcements were made in advance of and during the Summit, including plans by a group of over two hundred investment funds to put pressure on companies to increase their emissions reductions efforts. One of these funds is the California Public Employees Retirement system, while other financial institutions highlighted the need for climate risk disclosure in making investments.

Ultimately, the One Planet Summit underscored the degree to which the administration’s decision to exit the Paris Agreement has relegated the United States to the position of the world’s sole bystander—even Syria joined the Paris Agreement last month—left out of an increasingly multi-faceted and multi-stakeholder conversation. As the conversation continues, the United States may find itself on the outside looking in, a position to which it is not accustomed, but may need to grow more so.

Ellen Scholl is an associate director at the Atlantic Council’s Global Energy Center. You can follow her on Twitter @EllenScholl