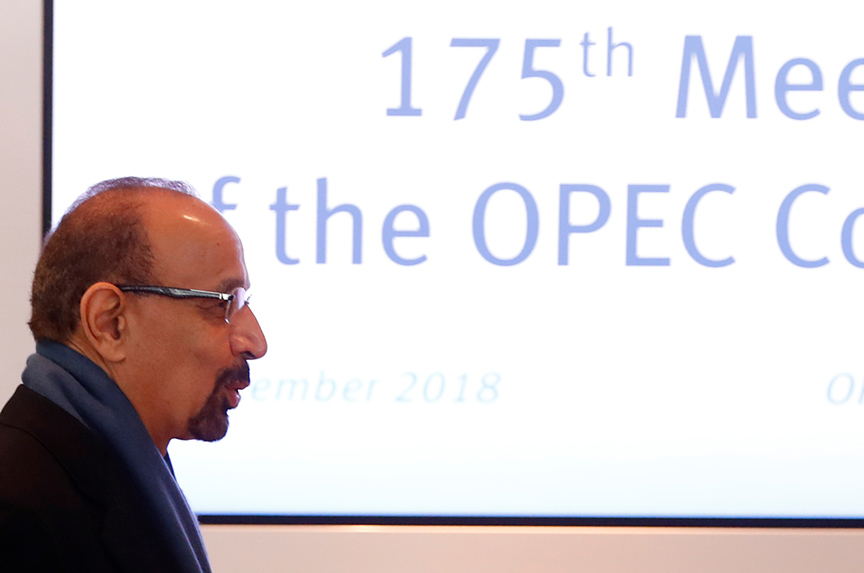 Geopolitical issues converged in an unlikely location this week—the conference of the Organization of the Petroleum Exporting Countries (OPEC) and OPEC and non-OPEC Ministerial meeting in Vienna, Austria. On the table were production cuts intended to stop the 30 percent slide in the price of oil from its high of $85 per barrel (Brent) in early October. Yet Iran sanctions, the murder of Saudi journalist Jamal Khashoggi, Russia’s increasing engagement in the Middle East (part of a broader pattern of an assertive global posture), the escalation of trade tensions between the United States and China, and US President Donald J. Trump’s obsession with oil prices made politics a considerable undercurrent in OPEC’s decision to cut oil production.

While much of the drama surrounding the decision to cut production by 1.2 million barrels per day revolved around deliberations between the anchors of the OPEC and non-OPEC coalition, Saudi Arabia and Russia, respectively, the United States’ unprecedented leverage in Vienna, which emerged in the lead up to this decision, has, in effect, made Washington a “shadow member” of the cartel.

Though previous US administrations have taken an interest in OPEC and oil prices, Trump’s consumer-oriented approach to the oil market—and his willingness to use his Twitter account to advocate for that approach—has made always-difficult OPEC negotiations that much more challenging.

The Saudis, in particular, have taken Trump’s tweets over the past year seriously. This at first was in support of Trump’s hardline stance against Iran. However, Trump’s leverage-by-tweet has recently taken a more ominous tone as the administration’s continued support for Saudi Crown Prince Mohammed bin Salman in the Khashoggi crisis seems to have come at a cost. While it has been reported that the Trump administration seeks to push Saudi Arabia to end the war in Yemen and end the blockade on Qatar, Trump’s primary interest seems to be to keep oil prices low. On December 5, he tweeted: “Hopefully OPEC will be keeping oil flows as is, not restricted. The World [sic] does not want to see, or need, higher oil prices!”

Presidential tweets aside, much of the oil market volatility over the past year has been driven by conflicting US goals: driving Iranian oil exports to “zero” while simultaneously keeping oil prices low. The oil price collapse from its early October highs was caused in part by the Trump administration’s decision to sacrifice its former goal by granting sanctions exemptions to some countries buying Iranian oil to prevent an oil price spike. US Special Envoy for Iran Brian Hook’s comments that the Trump administration next year expects “a much better-supplied oil market, and that will put us in a better position to accelerate the path to zero” suggests the administration will continue to tighten the screws on Iran—as long as the oil price remains low.

Reports that Hook met with Saudi Energy Minister Khalid al-Falih in Vienna on December 5 only fueled speculation of US influence—and angered OPEC members—complicating negotiations further. (A source aware of the discussion suggested the conversation revolved around future Iran sanctions and not OPEC cuts.)

As a result of the dramatic rise of US shale over the past decade—last week the United States became a net exporter of oil for the first time since the 1960s—OPEC has recognized that it cannot influence the market alone. This underpins the so-called Vienna Alliance between OPEC and a group of non-OPEC countries, most notably Russia. This group has significantly more ability to shift the market, with Saudi Arabia and Russia alone representing 26 percent of global oil production.

However, this alliance has made organizing production cuts all the more difficult.  Russia is in better financial shape than it was during the initial OPEC-non-OPEC production cuts at the end of 2016. It suggested in late November that it is “perfectly comfortable” with $60 oil, ironically aligning it with Trump’s goals.

Meanwhile, OPEC has struggled with unity in its own tent. Qatar’s announced intention to leave the cartel in January, Iranian frustration with what it sees as US meddling in the organization’s business, and reports of dissatisfaction with the dominance of the Riyadh-Moscow alliance in OPEC’s planning among smaller members made consensus-building at the Vienna meeting particularly challenging.

Given this backdrop, the production cuts are all the more remarkable having overcome both internal disagreement and sidestepped Trump’s tweets. It is worth noting that the production cut of 1.2 million bpd (800,00 from OPEC and 400,000 from non-OPEC) are based off October production instead of the higher November production levels, making the cuts deeper than they would appear on face value.

However, al Falih went out of his way during the post-meeting press conference to note that OPEC’s decision was important for US economic growth in light of the United States’ role as a net oil exporter. In an interview with Bloomberg, Nigerian Oil Minister Emmanuel Kachikwu hoped that Trump would be “excited” by OPEC’s decision. One observer at the OPEC press conference noted how all attendees were “waiting for the next tweet.” In short, OPEC’s decision acknowledges US influence in the market and within the cartel with the hope to change the president’s calculus.

Despite Trump’s longstanding disdain for OPEC, he has managed to make the United States its “shadow member.”  Washington’s influence is a reversal from a decades-long vulnerability to OPEC’s decisions.  Yet if the United States is to be credited with newfound leverage in the oil market and OPEC, it is quite uncertain what productive outcomes it has been able to produce with that leverage. Trump seems focused on what are ultimately relatively small price differences at the pump—prices have decreased by 50 cents since their high in May, and only 10 cents on the year—instead of working to achieve longstanding foreign, national security, energy, and trade policy goals. That the United States cannot advance significant goals from this newfound leverage is an opportunity missed.

Randolph Bell is the director of the Atlantic Council’s Global Energy Center.

Reed Blakemore is an associate director in the Atlantic Council’s Global Energy Center.