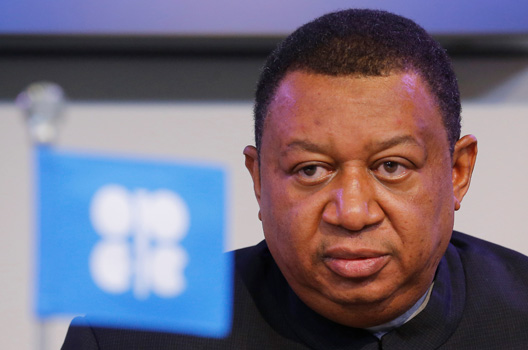 The oil production cuts set forth in a deal recently enacted by the Organization of the Petroleum Exporting Countries (OPEC) will be upheld by the nations involved, effectively stabilizing the global energy market, Mohammad Sanusi Barkindo, OPEC’s secretary general, said in Abu Dhabi on January 12.

“I remain very confident with what I have seen in the last several months,” Barkindo said at the Atlantic Council’s inaugural Global Energy Forum. “The level of commitment I have seen on both sides, to me I think is unparalleled,” he added. Barkindo expressed confidence that signatories to the deal will meet their commitments, emphasizing the level of cooperation among all stakeholders.

In January of this year, a declaration of cooperation between twenty-four oil-producing countries, thirteen within OPEC and eleven non-OPEC, came into force with commitments from each of the signatories to reduce oil production. Russia is among the non-OPEC countries committed to production cuts. This deal marks “the first time in history where we have a broad platform of producing countries coming together voluntarily,” committed to restoring balance to the energy market, said Barkindo.

As reported by Reuters, Iran, an OPEC member, successfully secured exemption from the deal, claiming its economy was beginning to recover in light international sanctions lifted with the nuclear agreement. The nuclear deal resulted in the removal of sanctions as a result of which the Iran could export oil. Iran has taken advantage of other countries’ production cuts to reach out to new markets and sell oil, which had been previously been stored.

The OPEC agreement “will hold,” said Khalid al-Falih, the minister of energy, industry, and mineral resources for the Kingdom of Saudi Arabia. “There is a lot of speculation… but I have the full trust and confidence of my colleagues.”

The deal is designed to reduce oil production so as to increase the price of oil. Ultimately, with less oil on the market, the price of oil will rise. Through growth and demand, said al-Falih, “the markets will continue to balance, and the price will respond accordingly.” However, prices have fallen since the official onset of the OPEC dealing, causing concern as to its efficacy.

According to Suhail Mohamed Faraj Al Mazrouei, minister of energy for the United Arab Emirates, oil prices are seeing “a fair movement toward the correction,” in light of the deal. However, he said that “the real correction will happen when we see movement from all of the concerned nations who came together to try to help the market and help bring in more investments to the market.” Though the average price of a barrel of oil has not yet arrived at an ideal price range, according to Al Mazrouei, “we are on the right trajectory for balancing the market.”

Ultimately, Al Mazrouei said he trusts the countries to enforce their commitments. Though “there is some uncertainty still,” said Patrick Pouyanné, chairman and chief executive officer (CEO) of Total S.A., he said: “I’m convinced that all of these countries are committed to what they decided.”

According to Issam A. Almarzooq, Kuwait’s minister of oil, electricity, and water, the greatest concern is ensuring countries involved in the deal enforce their commitments to cut oil production. “Commitment needs cooperation from all twenty-four countries,” he said. Almarzooq announced that Kuwait, Saudi Arabia, UAE, Iraq, Qatar, and Russia committed to the agreement in December 2016. Kuwait has thus far exceeded the commitment announced, he said.

Al-Falih said it took participating nations a year to come to the agreement, claiming the lengthy process was necessary “because everybody intended, once they signed up, to implement.” If they did not plan to comply with the agreement, countries would have signed up much sooner, he said.

Almarzooq acts as a watchdog and enforcement officer for the deal, leading the ministerial monitoring committee, comprised of Kuwait, Algeria, Venezuela, Russia, and Oman. The monitoring committee will meet in Vienna on January 21 to assess compliance with the deal.  Almarzooq discussed the prospect of an enforcement mechanism put in place by OPEC to allow the committee to monitor the level of signatories’ commitment.

Jabbar al-Luaibi, Iraq’s minister of oil, asserted his country’s dedication to the agreement. “Iraq is definitely and certainly committed, compliant with the OPEC agreement,” he said, describing how Iraq has already taken measures to cut oil exports. Iraq committed to reduce production by 210,000 barrels per day, and cuts will be complete “before the end of this month, definitely,” said al-Luaibi.

While he did not question the compliance of OPEC members to the agreement, Amos Hochstein, special envoy and coordinator for international energy affairs at the US Department of State, said that “the market is going to continue to shift, regardless of international agreements.” He described how the traditional stance of the United States on such matters stipulates that the market should manage itself.

However, “business as usual is not an option,” according to al-Falih.

Ultimately, “the bottom line here is very simple,” said Sultan Ahmed Al Jaber, the chairman of Masdar and CEO of the Abu Dhabi National Oil Company. He added, “there is no silver-bullet solution to the world’s growing energy needs.” In order to effectively address the geopolitics of the energy transformation and meet the rising challenges of energy demands, “all must work in close integration across borders, multiple geographies, and diverse regulatory frameworks.”

Image: OPEC Secretary General Mohammad Barkindo listens during a news conference after a meeting of the Organization of the Petroleum Exporting Countries (OPEC) in Vienna, Austria, November 30, 2016. (Reuters/Heinz-Peter Bader)