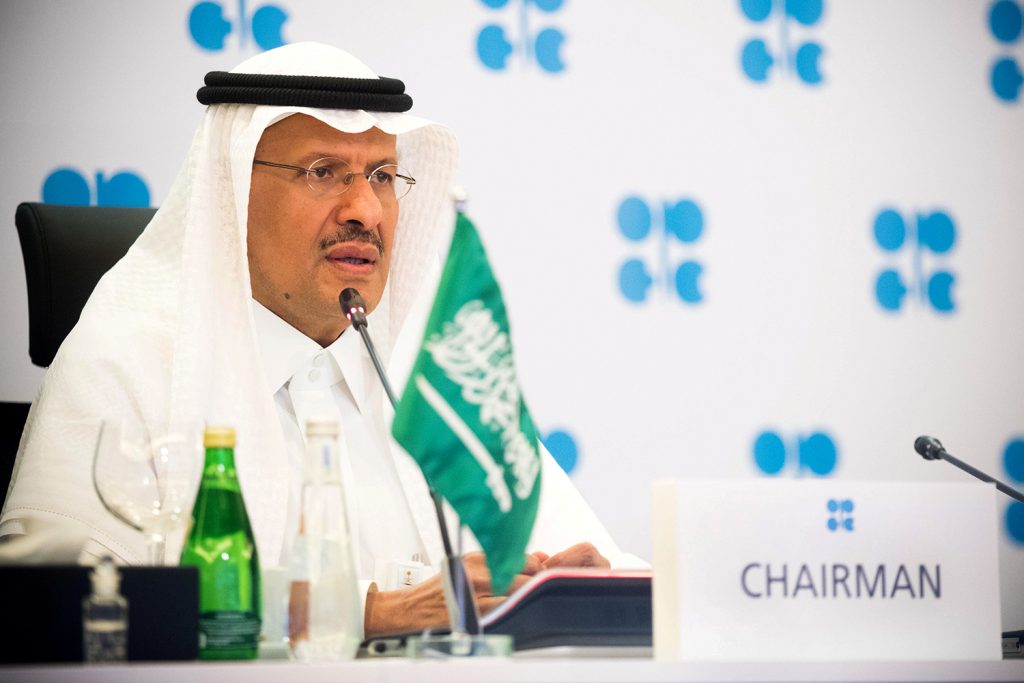 Following the spectacular collapse of OPEC+ negotiations in early March, a price war between Saudi Arabia and Russia flooded the market just as the impact of COVID-19 on global oil demand was coming into sharp relief. The oil price dropped precipitously, from about $50 for Brent crude in early March to a low of under $25, before rebounding back above $30 over the past few days. With oil consumption continuing to drop, available global oil storage appeared to be the next massive problem—there literally would be nowhere else to put surplus oil.

OPEC+ called an emergency meeting on April 9 and the Group of Twenty (G20) called a special session on April 10—and after nearly four days of overnight negotiations (including the intervention of US President Donald J. Trump) an agreement was reached. The 9.7 million bpd cut by OPEC+, bolstered by a pledge to cut an additional 2 million bpd by Saudi Arabia, the UAE, and Kuwait, is the single largest collective market action since the creation of OPEC itself. The United States, Brazil, and Canada are projecting a combined 3.7 million bpd “organic cut” (production declines due to market forces) and there are reports that several G20 members will make an additional announcement on April 13 that could bring total production down by 18-19 million bpd.

However, with a projected 30 million bpd decline in demand in April, it is not clear that the herculean effort will be enough to stop the falling oil price. What the agreement will do at a minimum, however, is delay the rapidly approaching crisis in available oil storage. According to analysis from KPLER, an oil market data company, there are only around thirty days of available storage left at current build rates. The cut pushes that deadline back and allows for the chance that the world might avoid the storage crisis altogether.

The mechanics of the deal

The deal almost did not happen: First, Russia-Saudi bickering over who was at fault for the collapse of the March 6 OPEC+ talks and the subsequent price war nearly derailed the meeting to begin with, and pushed it back from April 6 to April 9. Second, while by early April both Russia and Saudi seemed to recognize the need for a deal, Russia insisted that the United States participate in cuts, which was politically challenging. Third, Mexico held the talks hostage for three days as it refused to cut the 23 percent required by the agreement.

Two factors played a role in overcoming these obstacles, though it is hard to say which was more important. The sheer necessity of cuts made the deal all but a foregone conclusion. In March, all OPEC+ countries were ready to cut, apart from Russia. As the situation deteriorated, it became obvious that cuts would happen regardless, either through an organized process or through the chaos of maxing out storage. All parties, even Russia, had the incentive to be involved.

In addition, President Trump’s intervention in the negotiations—though the United States officially stayed out of them—probably helped resolve several sticking points as countries tried to maximize their own benefit within the framework. Long opposed to OPEC, the US president found himself on several calls with Russian and Saudi leadership, pushing and prodding to make sure the organization did its job. The options the administration presented were often contradictory and bordered on inchoate (floating the idea of a US-Saudi oil production partnership, for example, which seemed to be aimed at Russian fears of being pushed out of the market by the United States.) Much of this was kabuki. To ensure Saudi stuck to the deal even though Mexico was balking—and Saudi Arabia was taking an all or nothing approach to ensure compliance from all parties—the United States threatened to pull troops out of the Kingdom. This was most likely just political theatre. We will never know how much this type of pressure influenced the Saudis, but the deal held together and Trump tweeted a victorious congratulations to all parties.

At the time of publication, Brent futures are up by over four percent. But the next several days of market action will likely be volatile as key elements of the deal and its potential weaknesses become clearer. For instance, to overcome Mexico’s recalcitrance, the United States agreed to cut 250,000 bpd and have Mexico pay it back later. No one really knows what this means because at the federal level, the United States has no mechanism to enforce cuts and simply relies on market forces.

Current cuts should continue through July before drawing down and settling to 6 million bpd between January 2021 and April 2022. But the path set out by OPEC+ should be seen as a re-commitment from the group to intervene as the oil market recovers from a COVID-19 induced shock to demand, not as the resolution to a market currently in crisis. While the result of an Easter-weekend negotiation not remove market anxiety, at the very least the agreement should pull it out of free-fall.