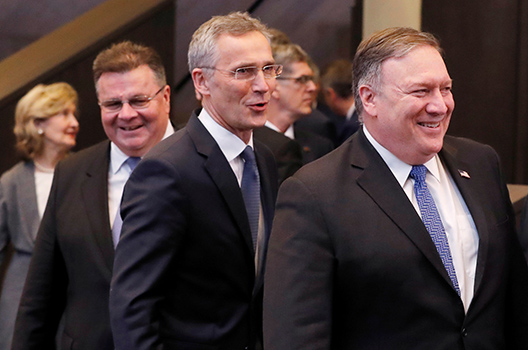 Polarization within our nation and tumultuous relations within our alliances risk making the United States look vulnerable to our adversaries. While some of these divisions are real, the United States and its allies are in fact more strategically aligned in grand strategy – enjoying the support of Republicans and Democrats – than they have been since 9/11, if not 1989.

Our nation and its closest friends agree that the great challenge of the 21st century will be the competition between the free world and authoritarian corrupt state-led capitalism, chief among them China and Russia.

The National Security Strategy and the National Defense Strategy clearly articulate this great power geopolitical competition, arguing that our alliances provide “a durable, asymmetric strategic advantage that no competitor or rival can match.” However, we have much work to do to implement policies to achieve this strategy. Specifically, we are not as focused on how to bolster our alliances as a key component of our strategy to compete effectively.

To better address the Russian threat, the United States needs to bolster its military presence in Europe to establish what the Atlantic Council Task Force on US Force Posture in Europe calls “permanent deterrence,” especially in the Baltics, Poland, and the Black Sea region. Our allies need to be part of this new force posture, our policies need to prioritize arms and technology sales and transfers to our allies, and any divisions among us cannot become opportunities for Russia to weaken NATO cohesion or resolve.

Europe has once again become the center of the confrontation between the West and a revisionist Russia. Russian President Vladimir Putin is determined to roll back the post-Cold War settlement, undermine the sovereignty of Russia’s neighbors, shatter NATO, and overturn the US-led rules-based order that has kept peace. As retired Gen. Philip Breedlove and Alexander Vershbow from the Atlantic Council’s Task Force wrote, “Moscow’s invasion and continued occupation of Georgian and Ukrainian territories, its military build-up in Russia’s Western Military District and Kaliningrad, and its ‘hybrid’ warfare against Western societies have heightened instability in the region, and have made collective defense and deterrence an urgent mission for the United States and NATO.”

Today, NATO is in the midst of its greatest adaptation since the Cold War. And the United States has played its part, including through generous funding of the European Deterrence Initiative. Last July’s NATO summit was at the same time among the most acrimonious and the most productive in recent history, bolstering the Alliance’s rapid reaction capabilities and hybrid warfare defense, and promising to enlarge the Alliance into the Balkans.

While much more remains to be done, allies are making strides toward their defense investment pledges:  since 2016, European allies have spent an additional $41 billion in defense; through 2020, they will spend an extra $100 billion; and their plans call for an additional $350 billion through 2024. By 2024, Germany is projected to have the biggest defense budget in Europe.

Ahead of NATO’s seventieth anniversary this April, there is more that can and should be done. Consistent with the National Defense Strategy, our task force proposes a package of permanent and rotational deployments, which would build on US capabilities already deployed in Poland and should be complemented by allied capabilities.

As the Atlantic Council Task Force recommends, we should make elements of the US deployment in Poland permanent, strengthen others by reinforcing the Brigade Combat Team (BCT) deployed there with enablers, assign another BCT on a permanent or rotational basis to Europe, ensure a continuous rotational presence in the Baltic States, and increase the US naval presence in Europe. This is not provocative, but common sense: what if we had assured the Germans during the Cold War that we would defend Berlin from forces based in the Netherlands?

We must also bolster our presence in the Black Sea region; help our allies replace Soviet-era equipment; and continue to help build the capabilities of close partners including Finland, Georgia, Sweden, and Ukraine. We need an intentional policy of bolstering the capability of our allies and partners to defend themselves, enhancing our collective defense and deterrence. Such a policy would help ensure that the United States with NATO sets the norms of interoperability for military cooperation among all US allies and security partners globally, facilitating larger coalitions and broader cooperation when needed.

Even if we periodically differ with our allies, our defense strategy should inevitably drive Washington to bolster and expand its alliances. In an era of geopolitical competition, the United States’ friends and allies are its best competitive advantage. Viewing our alliances that way would compel consistent policies to lead our alliances to ensure united fronts in standing up to Russian and Chinese aggression. We need to understand that our allies are a force multiplier for US capabilities, interests, and values, rather than a burden on the United States.

In the case of Russia, there can be no successful strategy to confront Putin’s aggression without a strong NATO. The questioning of our commitment to the Alliance is dangerous and only weakens our position. This rhetoric risks leading some of our allies to hedge on whether they can count on the United States, thereby weakening our united front against Russia and China.

And for Europe, China is becoming a greater geopolitical reality as it comes closer via cyberspace, trade and investment, and now a military presence close to Europe’s shores. The United States should confront any Chinese challenge with Europe as well as our Asian allies by our side.

The current tensions between Washington and its allies ranging from burden-sharing to trade are real. But these should not overshadow the shared challenge we face together. Unforced errors that unnecessarily divide Washington from its friends should be avoided, such as the trade tactics that have now seen Europe and Canada join common cause with Moscow and Beijing at the World Trade Organization. The United States should limit its trade challenges on national security grounds to our adversaries rather than our allies.

The acceptance of Russia and China as the main geopolitical challenge of the 21st century leads to the conclusion that US interests are best served when Washington and its allies act together. The United States is much better positioned if it does not assume the burden of countering Beijing and Moscow alone. Implementing a National Defense Strategy focused on near-peer competition with Russia and China requires that we put our alliances at the core, not the periphery, of our strategy.

We have already seen what can happen when Moscow or Beijing engage in bilateral “negotiations” with their neighbors, using their power and leverage to extract concessions, lock weaker partners in exploitative economic deals, or even to rewrite borders.

The United States leading a global set of alliances can deter this threat.

Editor’s Note: This is an edited version of testimony given to the Senate Armed Services Committee on January 29.