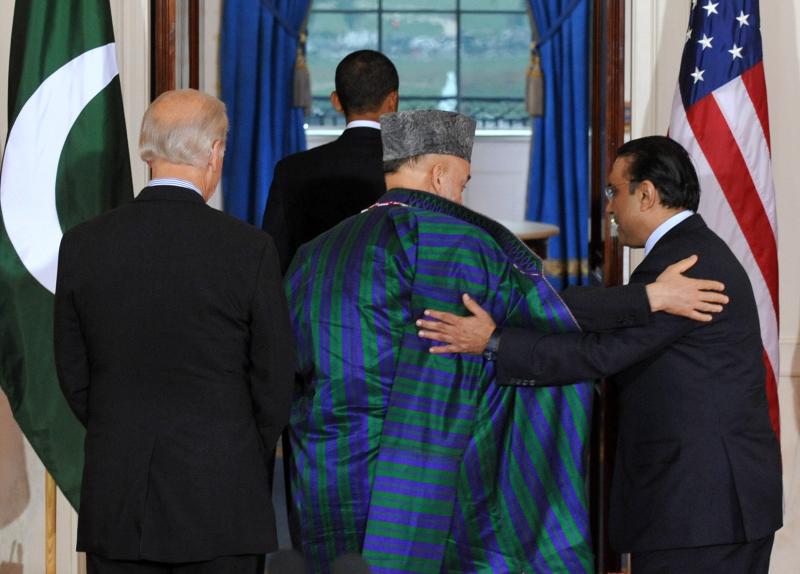 Some can’t wait to get out of Afghanistan and some can’t wait to see us leave. NATO allies now want out ASAP. Some have already left (Dutch troops), others are preparing to leave (Canadians) and soon the allied fighting force will be reduced to 100,000 Americans and 9,000 Brits.

When NATO allies volunteered military units to assist the United States in rooting out al-Qaida’s infrastructure in Afghanistan after 9/11, they figured they’d be home in a few months. Had their governments known that their troops would be in Afghanistan for a decade, they would have stayed home.

Most troublesome for U.S. and NATO allies is that al-Qaida, the original reason for dispatching troops "out of area," fled Afghanistan for Pakistan in mid-December 2001.

The prestigious Council on Foreign Relations’ 25 experts-strong, 71-page task force report on the crisis, says, given "the complex political currents of Pakistan and its border regions … it is not clear U.S. interests warrant" the costly war, "nor is it clear that the effort will succeed."

And if U.S. President Barack Obama’s December strategic review "shows progress is not being made, the U.S. should move quickly to recalculate its military presence in Afghanistan."

The same week CFR published its gloomy assessment of the Afghan war, one of Pakistan’s most influential journalists, the editor of a major newspaper, made the "off the record" — which now means go ahead and use it but keep my name out of it — rounds in Washington to deliver a stunning indictment of all the players.

— There is no Indian threat to Pakistan, except for what is manufactured by Pakistan’s Inter-Service Intelligence agency.

— Washington says Pakistan must do more to flesh out insurgent safe havens in the Federally Administered Tribal Areas. As long as the Taliban were the illegitimate children of ISI that was possible. But Taliban are now the enemies of Pakistan, irrespective of whether they are Pakistani Taliban or Afghan Taliban. Assets have become liabilities. We’ve lost 3,000 Pakistani military KIA. All the jihadis terrorist organizations were created by Pakistan — and they have now turned against us.

— The United States should cut its losses in Afghanistan as rapidly as possible.

— There is no chance whatsoever for the United States and its NATO and other allies to prevail in Afghanistan. No big military successes are possible. All U.S. targets are unrealistic. You cannot prevail on the ground. ISI won’t abandon Taliban. And if Taliban doesn’t have a major stake in negotiations with the United States, these will be sabotaged by Pakistan.

— The Kerry-Lugar aid bill ($1.5 billion a year over five years) is too little too late. Only half of U.S. pledges are actually coming in. A huge slice of this bill goes to administration and local bureaucracy. Some $25 million was earmarked for Sesame Street — for Pakistanis! U.S. aid isn’t achieving any of its objectives. Flood relief also caused havoc. 400 bridges were washed away.

— The attacks against U.S./NATO supply lines through Pakistan, which have included the torching of scores of tanker trucks, weren’t the work of Taliban guerrillas; they were all the work of ISI made to look like Taliban. The objective was to demonstrate the extent to which the United States is dependent on Pakistani security.

— U.S. drone strikes? The Pakistani line about "huge provocations" and more civilians killed than Taliban and their partners is pure army invention. Drones play a limited role and should continue.

— One can’t begin to understand the Pakistani crisis until one absorbs the terrifying fact that Pakistan’s 180 million population includes 80 million children under 18 — almost half the population. And only 40 percent of Pakistani children are in school. (Reminder: Pakistan is also one of the world’s eight nuclear powers, counting North Korea).

— India and Pakistan must bury the Kashmir feud. The reason it continues in an off-and-on mode is because that’s what the Pakistani army wants. The army’s corporate interests are at stake. If the crisis is resolved, the army loses its narrative for dominating the economy.

— Pakistan is a work in progress. The war against extremism is our war, too. The stake holders are changing. Urban Pakistan isn’t interested in al-Qaida’s global caliphate narrative.

— The pictures and stories about the public whipping of a young girl sent a wave of revulsion through our middle classes. Alas, they are still a minority.

— Pakistani President Asif Zardari is pilloried in a corner. He has no room to move.

— Anti-Americanism? (The Pew Foundation poll indicates 64 percent of Pakistanis believe the United States is the enemy.) Yet the one thing they all want most of all is a U.S. visa. The anti-U.S. feelings all trace back to the way Washington left us high and dry after we had fought together against the Soviet occupation of Afghanistan in the 1980s.

— China? The Pakistanis see Obama’s visit to India and the warm relations between the old and the new superpower as further evidence it would behoove Islamabad to further enhance its relations with China, which is busy enlarging its footprint in Pakistan.

An Iran-Pakistan-China pipeline is considered a realistic project. Singapore now has rights on Gwadar, the new Pakistani port on the Arabian Sea, which will soon be transferred to China (with some fancy footwork by Pakistan’s Supreme Court that will say the Singapore contract doesn’t hold legal water, which will clear the way for China).

Between the Council on Foreign Relations’ 25 experts-strong, 71-page report and a prominent Pakistani newspaper editor’s confidential musings about his own country’s betrayals, there was a touch of Yogi Berra’s déjà-vu-all-over again.

Arnaud de Borchgrave, a member of the Atlantic Council, is a senior fellow at CSIS and Editor-at-Large at UPI. This article was syndicated by UPI. Photo Credit: UPI Photo.