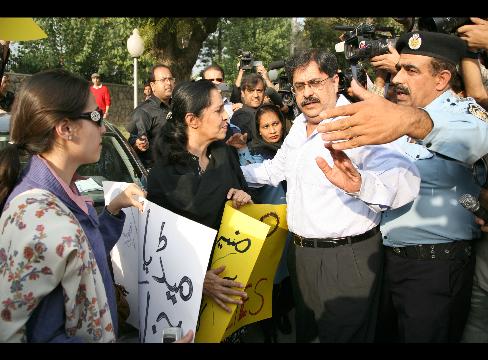 Washington is obsessed with the war in Iraq, the danger of Turkish troops clashing with Kurdish militants and President George W. Bush’s possible showdown with Iran over its nuclear weapons ambitions.

Yet the larger threat may be a so-called Black Swan event, something that is both far outside conventional expectations and of such extreme consequence that it might shift not only U.S. electoral dynamics but also the global security calculus.

The odds are rising of such an event growing out of Pakistan, whose status as the most dangerous place on earth was further confirmed by President Pervez Musharraf’s declaration of emergency rule on Nov. 3. His suspension of the constitution, dismissal of the chief justice, restrictions on free speech, and roundup of some 1,500 lawyers, judges and political activists do little to change the nation’s frightening course. Jihadist and extremist groups sympathetic to the Taliban and al-Qaeda have grown in frontier provinces and spread to Pakistan’s main cities. Secular leadership is faltering in a nuclear-armed country.

As Musharraf put it during an address to the nation: “Inaction at the moment is the suicide of Pakistan, and I won’t allow this country to commit suicide.” What to watch is whether the emergency measures, which Musharraf’s opponents say are aimed more at personal than national preservation, reverse these forces or merely push them underground to explode in the coming days and weeks. For now, what has died is a peaceful evolution toward secular, democratic rule through a power-sharing arrangement between the military- led regime and former Prime Minister Benazir Bhutto.

Intact is the nightmare scenario: Musharraf’s failure or death allows extremists, some of them certainly in the state security services, or ISI, to gain control of the country and its nuclear arsenal of 50 to 100 weapons. Bhutto and others have suggested the possible role of ISI officers in the assassination attempt on her in Karachi when she returned from exile last month, a bombing that killed 136. Short of extremists gaining power, imagine terrorists striking the U.S. in an event far worse than 9/11, but this time the trail leads to Pakistan.

Any U.S. president will be forced to respond, but given the sobering lessons of Iraq it’s not clear how to do so without making matters worse. U.S. officials say the odds of an extremist takeover are remote. Islamist forces have never polled much more than 10 percent in elections, and Bhutto’s giant reception underscored the appeal of secular leaders.

Yet the point of a Black Swan exercise is to avoid the self-deception of conventional wisdom and remember the world’s most dramatic changes have come from unanticipated quarters: Iran’s Islamic Revolution, Fidel’s takeover of Cuba, the collapse of the Soviet Union and 9/11, to name just a few. The term Black Swan grew out of an old idea that all swans were white, a notion that was turned on its head once black swans were discovered in Australia. Since then, author Nassim Nicholas Taleb used the phrase as the title of a book published earlier this year that describes hard-to-predict, potentially disastrous events beyond the realm of normal expectations.

Pakistan has been breeding Black Swan possibilities for years, but the situation has worsened. Militants have spread from Pakistan’s tribal areas, precipitating the Red Mosque assault in July and the Bhutto bombing. Richard Haass, president of the Council on Foreign Relations, compared the situation to Iraq and Afghanistan “where people who have negative agendas are increasingly in positions to assert them.”

U.S. officials have long suspected that Musharraf’s military hasn’t wanted much to go after insurgents. He recently escalated his attacks amid U.S. pressure and fearful that he has let extremism go too far. The question now is whether Pakistan’s military has the training and equipment to succeed in an insurgent fight. Finally, Western intelligence agencies can’t easily account for all Pakistan’s nuclear weapons or where they might be found should Pakistan spin out of control.

The picture is so ugly that senior officials avoid discussing it in public. So what to do? For starters, the U.S. must encourage Pakistan to expand small, but effective programs to bring young people out of the radical madrassas, the Islamic religious schools that can be breeding grounds for anti-Western views and jihadism. The U.S. also must deepen and intensify the military ties that were restored following September 2001 after they were cut in the previous decade by Congress. The Pakistani army’s makeup and loyalty is too important to be left to chance at a time when it remains the best hope against extremists.

The U.S. should encourage Musharraf not to let up as extremists threaten not just the U.S. and Afghanistan but also Pakistan’s future. It is harder to prescribe a response should an ugly Black Swan event happen. I haven’t found any U.S. official who has engaged in a successful war game involving Pakistani nukes in extremist hands. Nor can anyone predict how neighboring, nuclear India or distant Israel might react. To the best of my knowledge, there’s no contingency plan for responding to a terrorist strike on the U.S. that has its origins in Pakistan. I hope someone has better answers. But given recent events I fear my Pakistani Black Swan scenarios aren’t as far-fetched as many Washington wishful thinkers might hope.