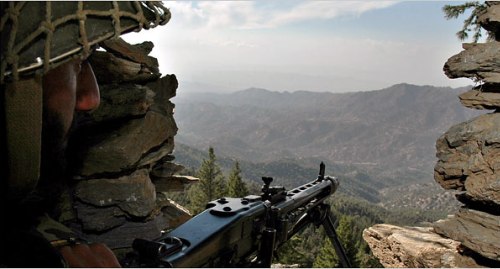 It was at the officers club in the military garrison town of Rawalpindi, a short drive from the capital of Islamabad. The one-star brigadier general, holding a glass of mango juice, asked for permission to speak to the three-star corps commander. They spoke in English as Pakistani generals are prone to do when speaking among themselves.

"Sir," began the one star, "I can’t help but conclude that the ‘major non-NATO ally’ status conferred on Pakistan during Musharraf’s presidency, has become a bit of a joke, in very poor taste.

"We’ve lost three soldiers to U.S. helicopter fire in the tribal areas and we have retaliated by closing down the NATO supply line into Afghanistan at the Torkham border post. Taliban insurgents then torched the NATO tanker trucks we had blocked.

"It’s an open secret among our troops that our military relations with America are now governed by suspicion and hostility. The military assistance we are getting from Washington is the butt of jokes among junior officers and the rank and file say we’ve been blinded by a phony friendship. Why would the Americans give us old Russian helicopters instead of their Black Hawks, which we read in their defense journals they have by the hundreds in their National Guard units?"

"Sir, it is increasingly obvious to all of us that America does not consider us an ally in their struggle against the Taliban. I’ve been reading excerpts of Bob Woodward’s new book ‘Obama’s Wars’ and it’s clear as a bell they are looking for a way out of Afghanistan as quickly as possible by doing a deal with (Taliban leader) Mullah Omar.

"President Obama’s ratings keep slipping. Sixty percent of Americans want to leave Afghanistan as fast as possible. We helped put Omar into power in Kabul in 1996 to put an end to the civil war that followed the Soviet Union’s defeat and departure. We got along fine with Omar before the Americans were attacked in 2001. And we keep reading that 9/11 was a conspiracy between the CIA and Mossad. So, my question, sir, is what do we think we are doing? We don’t have a dog in any of these fights."

"So what are you suggesting, Ahmad. I’ve asked you to come to the point and you are beginning to irritate me," said the three star.

"Sir, I read a lot of American and European publications online. The Americans are acutely conscious that their title as the world’s leading superpower is gradually slipping out of their grasp and they speculate quite openly that the 21st century will not be America’s, but China’s.

"I remember when I was at the military academy, sir, before I got my commission, that America kept punishing us with all sorts of sanctions because of our efforts to develop a nuclear deterrent against India’s nuclear weapons. For 10 years after that none of us were allowed to attend American staff colleges. In fact, America didn’t exist for us, except as a hostile adversary that kept stabbing us in the back. We used to joke that the only way to tell when things were improving is when America stabbed us in the chest."

"Ahmad, I have to leave as I’m expected for dinner in Islamabad. Are you suggesting that we change our major power relationships?"

"Sir, that would be very presumptuous of me. But I hope that the men in charge of Pakistan’s destiny over the 21st century are thinking about where our true national security interests lie. If you read the American media, there are stories every day about the 20th century’s superpower losing its mojo …"

"Losing it’s what?" the three star asked reaching for his cap.

"Mojo is slang, sir, for self-confidence and self-esteem. It’s also a magic spell in African voodoo culture. And China, sir, has got its mojo on full throttle."

"That’s all above my pay grade, Ahmad," the corps commander said as he adjusted his cap.

"Sir, if I may, I also read online that Taiwan, once a dominant financial and economic power in the world is now thinking of becoming China’s fourth economic zone."

"Who are the other three?" the three star said as he walked away, with Ahmad in tow to salute him as he got into his staff car, red flag with three stars and crossed swords flapping in the evening breeze.

"Las Vegas? Is that an American joke?"

"No sir, it’s Macau, where China recovers much of what their new class of millionaires and billionaires make in their new economic system."

"Ahmad, go home and stop spending so much time online. All that stuff won’t get you your second star."

Forgoing exchange is fictitious. But the state of mind is all too real.