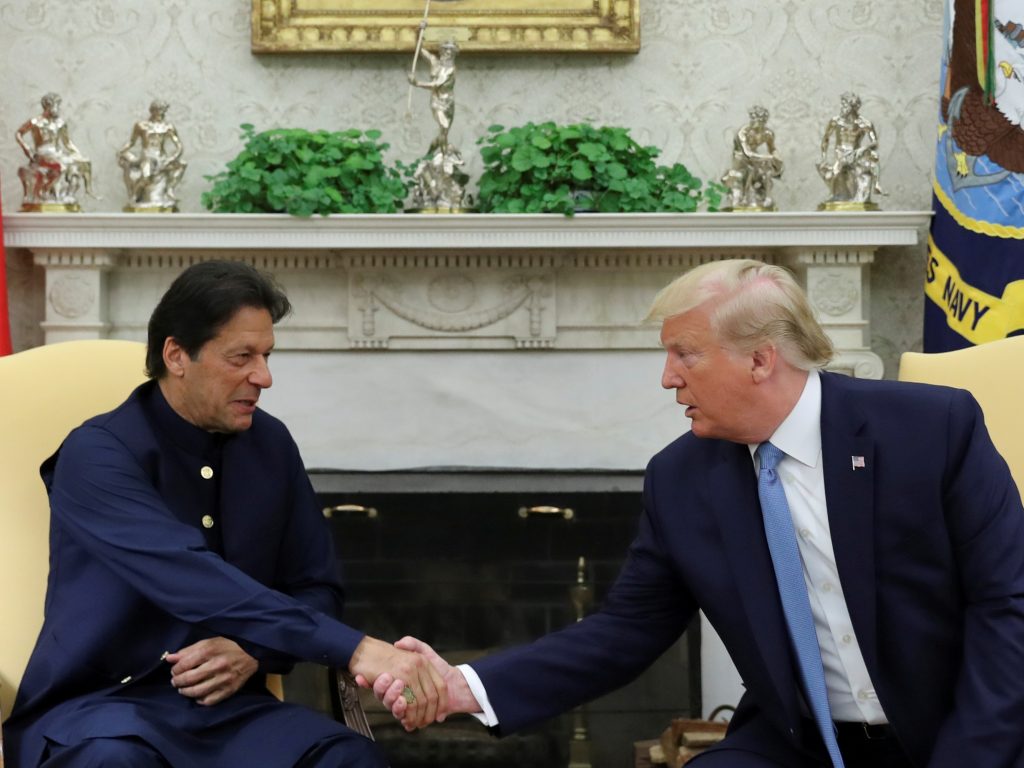 Pakistani Prime Minister Imran Khan said he and US President Donald J. Trump agreed to eliminate the “communication gap,” between their two countries during Khan’s visit to Washington on July 22. Speaking at the United States Institute of Peace (USIP) on July 23, Khan described his meeting with Trump as “one of the most pleasant surprises.”

The US-Pakistani relationship has been strained after the Trump administration decided to suspend $300 million in aid to Pakistan in September 2018 due to their belief that Islamabad did not do enough to combat terrorism. Trump has specifically criticized Pakistan as a “safe haven to the terrorists we hunt in Afghanistan.”

Khan pushed back on the argument that Pakistan has not done enough to help the United States’ counterterrorism operations, explaining that since the beginning of the war in Afghanistan, Pakistan has “lost 70,000 people. We lost over 100 billion dollars to our economy. And yet there was mistrust…we passed through a terrible time, and yet the United States thought we weren’t doing enough, that we were playing a double game.”

Khan reflected on the humiliation he personally felt as a Pakistani when the United States conducted the operation that killed Osama bin Laden within Pakistani territory, saying, “here was a country [which] was supposed to be an ally. And our ally did not trust us.”

Khan argued that after the September 11 terrorist attacks the partnership with Washington “was never multipronged. It was basically a transactional relationship.” After speaking with Trump on July 22, however, Khan saw potential for a new phase in US-Pakistan cooperation, saying, “the reason I am happy leaving the United States this time is that we now have a relationship built on a mutual [goal], which is peace in Afghanistan.” When asked directly whether there had been progress on restarting the US security assistance, Khan stated, “no, I never asked for any assistance…I asked for understanding, not assistance.” Less than one week later on July 27, the United States announced the approval of $125 million in technical and logistics support for Pakistani F-16 fighter jets.

The ongoing Afghanistan peace negotiations was the main point of discussion between the two leaders, as the United States and Taliban representatives continue to near a peace deal in Qatar. On July 27, Taliban officials once again refused to open talks with the Afghan government, arguing that they need a withdrawal agreement with the United States in place before those talks could begin. Khan reiterated his stance that while the devolved nature of the Taliban structure makes political negotiation with the group difficult, there is no military solution possible in Afghanistan. Peace “can only take place through a political settlement through dialogue,” he said.

Pakistan can play a role in pushing the Taliban to participate in future talks, Khan argued. Following his meeting with Trump, Khan said he “will meet the Taliban and I will try my best to get them to talk to the Afghan government.”

Khan was confident that his position in support of a peace deal would be backed by the Pakistani military, saying “we today speak as [if] there is no difference between the policies of the Pakistan security forces or Pakistan’s democratically elected government.” This marks a turning point in  relations between the government and the military, which is often thought to operate as an independent entity within Pakistan.

Khan attributed his credibility with the Afghanistan Taliban to the strength of his own domestic support paired with a well-received position of non-interference in Afghanistan’s internal affairs. In response to a question about Russia and Uzbekistan’s offer to host peace talks, Khan underscored the need to involve all neighbors of Afghanistan in the peace process but cautioned that some countries might not interested in peace in Afghanistan. Khan maintained that he “firmly [believes] that the United States should try and co-opt as many countries as possible,” in the Afghanistan peace talks.

Nearly six months after mutual airstrikes and a dogfight between Indian and Pakistani aircraft, Khan characterized the relationship with Pakistan’s neighbor India as “turbulent,” saying that “whenever we have some developments in the relationship with India, some incident happens, and that’s all related to Kashmir, and we go back to square one.” The airstrikes and military contact in February 2019 were instigated after the bombing of an Indian military convoy by Pakistan-based militant group Jaish-e-Mohammed in the disputed territory of Kashmir.

When asked what an ideal solution for the Kashmiri question would be, Khan responded that “it should not be [up to] the Pakistani people anymore. It should be what the people of Kashmir want.” He noted that under the leadership of former Pakistani president General Pervez Musharraf and former Indian prime minister Atal Bihari Vajpayee, the two countries came the closest to a resolution and there was “convergence on a phased movement on Kashmir.” Khan’s comments potentially signal a renewed willingness to engage in dialogue on the Kashmir conflict.

When asked about the role Pakistan could play in South Asia’s other potential powder keg—Iran—Khan preached de-escalation. “I’m not sure that all the countries really understand the gravity of the situation with Iran,” he said. A potential war “is not going to be the same as Iraq. It could be much, much, much worse,” he warned. Khan strongly cautioned against military action because, “I feel Iran is getting very desperate. They should not be pushed into a situation where this leads to a conflict.”

Kyra Kocis is an intern with the Atlantic Council’s South Asia Center.