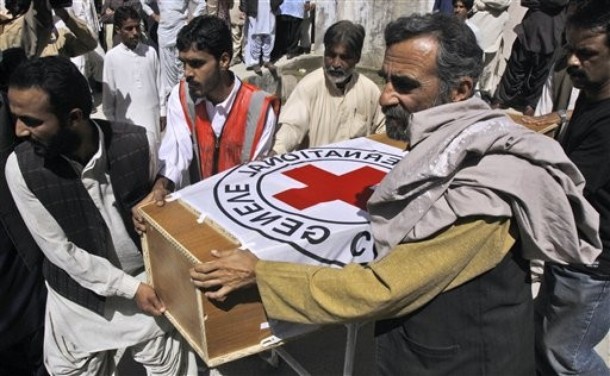 Pakistan is a nuclear power with a population of some 187 million of whom between 25 and 30 percent live below the UN-defined poverty line situated in just about the most fraught place on the planet. This weekend’s tragic and brutal murder of Red Cross aid worker Khalil Dale has once again brought home how dangerous Pakistan is…and how important Pakistan remains.

The Western intervention in Afghanistan deeply destabilized an already unstable political balance between Pakistan’s two largest ethnic groupings the Punjabis (45 percent of the population) and Pashtun (16 percent of the population). Whatever efforts are made to stabilize Afghanistan post-December 2014 without a Pakistan that enjoys a return to some semblance of political balance then such efforts are likely to fail. Pakistan is at the epicenter of instability in central south Asia and what happens there will affect us all.

When I visited Pakistan’s capital city Islamabad I was struck by how much Islamabad is itself a metaphor for Pakistan, a beautiful but in many ways artificial creation sitting precariously between Punjab and the Pashtun tribal lands (the rather optimistically-named Federally-Administered Tribal Area)- built to bring some formality to chaos.

That the Islamic Republic of Pakistan works at all as a country is something of a miracle. Until 1971 Pakistan was far bigger as what is now Bangladesh was once East Pakistan but was lost in a disastrous war with India. Within Pakistan a venal elite too often put personal interests above and beyond those of the people. The Pashtun are really a separate ‘nation’ divided by a meaningless 1897 border between Afghanistan and Pakistan drawn by British colonial administrator Henry Durand to make London’s life easier. From its 1947 founding by Jinnah on independence from Britain, Pakistan has always been a delicate compromise between the peoples who live within its complex borders and those that seek bits of it from without.

When I was briefed by Pakistan’s Inter-Services Intelligence the sheer scale of the challenges, risks and threats faced by the Pakistani state were all too apparent. Bordered by nascent superpower India to the south, real superpower China to the north-west, the dangerous space that is Afghanistan to the north, and the difficult Iranians to the West Pakistan’s strategic reality has never been nor ever will be an easy one.

The dispute between India and Pakistan over Jammu Kashmir has only gone on the back-burner because of Afghanistan but it is still hot. Indeed, the inability of the NATO-led coalition to stabilize Pashtun southern Afghanistan is made more difficult by Pakistan’s need for ‘strategic depth’ in the event of a future war with India. India is also active therein to frustrate Pakistan and to ensure the Pakistani Army is forced to look north and south simultaneously.

China is Pakistan’s main but fickle ally – my enemy’s enemy is my friend. Pakistan will be the epicenter of any future nuclear turbulence between China and India. The Americans, in spite of the Af-Pak strategy, have poured billions into Pakistan without ever really understanding the place or the people. Critically, they have lacked any real vision of what a relatively stable regional political, economic and, of course, communal settlement would look like. Indeed, Washington has too often seen Pakistan as a function of Afghanistan and paid insufficient attention to Pakistan itself. London? Too tied up in post-imperial political correctness and an appalling and self-imposed lack of strategic ambition to make use of the influence levers it still retains. Britain is strategically broken…and broke.

As the West considers Afghanistan’s future it must also now consider its future support for Pakistan. Far from being a ‘small nation a long way away’ as Chamberlain once said of Czechoslovakia, what happens in Pakistan will ripple outwards into east Asia, south Asia, central Asia, Russia, and the Middle East. It will also profoundly unsettle the many millions from Pakistan and Bangladesh who now call Europe their half-home.

Mr. Dale was a very decent, brave man trying to do right by the people of Pakistan and we should honor him by ensuring that such efforts continue. Pakistan is after all the Hotel California of world politics; you can check out any time you wish, but you can never leave.

Julian Lindley-French is Eisenhower Professor of Defence Strategy at the Netherlands Defence Academy, Fellow of Respublica in London, Associate Fellow of the Austrian Institute for European and Security Studies and a member of the Strategic Advisory Group of the Atlantic Council. He is also a member of the Academic Advisory Board of the NATO Defence College in Rome. This essay first appeared on his personal blog, Lindley-French’s Blog Blast