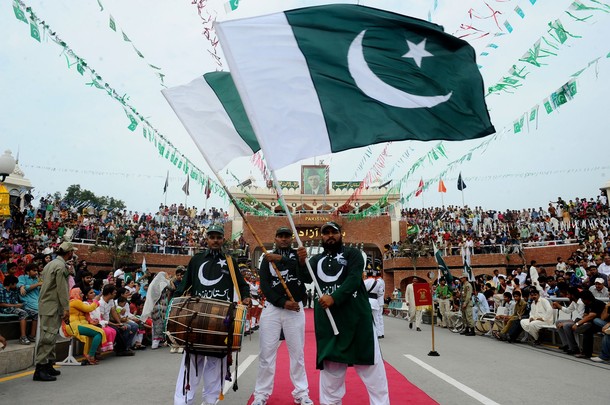 As it completes its 65th year as an independent state, Pakistan faces a host of challenges that only it can resolve, if its people and leaders have the will to do so.

It is no longer the split country that came into being in August 1947. Yet it occupies a strategic location that appears to be determining its destiny. It has been drawn into external conflicts on its western border at least twice, first in the 1980s and then in 2001. And it has fought at least three major wars with India. Although that relationship appears to be thawing, it remains vulnerable to the actions of non-state actors residing in Pakistan whom the state is unable or unwilling to control.

Meanwhile a full-scale insurgency led by the Tehrik-i-Taliban Pakistan continues in the western regions of the country. In Balochistan, a nationalist movement fights for attention while sectarian battles rage involving the Lashkar-i-Jhangvi. Critics of the government and the military allege that some of these actors operate under the umbrella of state agencies.

In brief, Pakistan remains a security state struggling to create a civilian identity, with sharp differences between the elected government and the military that acquired its autonomy partially from Gen Pervez Musharraf and partially from the current administration. More than four years after the government was elected, it has yet to withdraw its remit to the military that had designated the chief of army staff a de facto proconsul to handle all decisions related to security matters in Khyber Pakhtunkhwa. Subsequently, the government indemnified the military for all its actions in the region, creating a virtual martial law. No wonder then that Pakistanis and external observers raise a number of questions related to the future of the country.

One of the more startling features of conversations with the intelligentsia of Pakistan is the frequency with which they ask when the army is going to act. It is surprising that even today there are those who think a coup would yield the right results despite the history of the country showing how military rule has left it bereft of political development and created economic downturns that bedevilled successor civilian governments.

Another downside to involving the military in government is its professional degradation as its finds itself drawn into areas beyond its normal expertise. The military does not have a comparative advantage in running businesses or political systems, and extended military rule takes senior officers away from their professional duties. The dual-hatted COAS and president Gen Pervez Musharraf did not once visit his troops in the border region with Afghanistan. Gen Ashfaq Parvez Kayani made his first visit within days of taking over and has returned frequently.

Today, Pakistan is more than ready for civilian rule. It needs an active and informed elected government focusing on health, education and employment for its population of some 200 million, half of whom are below the age of 21, if it is to keep up with its neighbours.

How should Pakistan relate to India and Afghanistan?

On the security front, the nuclearisation of its weapons systems has helped Pakistan create a sense of parity and a perhaps a poison-pill defence against what it has traditionally viewed as a hegemonic India. But the conventional military gap is widening as India acquires newer technology and weapons systems and produces more itself. Meanwhile, Pakistan is still encumbered by heavy reliance on military aid and purchases from the West and China. Its defence industries depend heavily on import substitution that is costly and does not ensure parity in the long run, as the rest of the economy sinks to growth rates well below the rate of population growth. A shrinking economic pie will restrict the access of the military to state resources. Increased spending on defence does not guarantee a commensurate increase in security.

A view appears to be developing inside Pakistan and even among the military leadership that the true defence of the country lies in its society and economy and that the threats are not necessarily external. For these views to dominate, there will need to be a national debate on Pakistan’s goals for the next two decades. And then government and civil society will need to work to put the nation on the right path.

A very necessary part of this discussion are the youth of Pakistan. In my recent travels inside Pakistan in connection with an emerging youth leaders’ project, I learned how vibrant this important segment of Pakistani society is. Throughout the country they are launching new movements to serve society not because of government but, in the words of one of Pakistan’s top 100 young entrepreneurs, “in spite of government.”

On the economic front, the opening up of trade relations with India and Afghanistan promises to unleash new economic forces. But fears that the Pakistani military remains entrenched in its opposition to opening up to India remain in both India and Pakistan. A clear, public statement of support from the Pakistani military would do much to destroy the barriers that remain and give the civilian authorities no excuse to drag their feet.

Looking west, what kind of an Afghanistan does Pakistan want?

Traditionally, Pakistan has sought an Afghanistan that relies on Pakistan as its sole land route to the world, resists Indian domination and is either friendly or not hostile. Yet it has seen Afghanistan largely through the Pashtun prism, alienating more than half of the Afghan population. Pakistan also fears that India wishes to encircle it by befriending Afghanistan and investing in its northern, non-Pakhtun areas. Yet both India and Pakistan will need to rely on Afghanistan as a gateway to Central Asia’s energy and trade.

The counterfactual to both India and Pakistan’s current and past behaviour is a collaborative approach to develop Afghanistan, making it a partner in what I would call a Grand Trunk Road Initiative. Both countries would benefit from cheaper gas and hydroelectric power from Central Asia and Afghanistan. Pakistan would be able to export its cement and expertise to Afghanistan, helping transform Afghan suspicions about Pakistan’s attempts to ‘meddle in Afghan affairs’.

All these ideas are practicable. But they require a clearer definition of the goals of Pakistani society and government. And they require a broad-based discussion so all parts of the Pakistani population, especially the youth, feel involved and empowered. It is time Pakistan matured into the society that its founding fathers envisaged and that values domestic talent rather than relying on imported ideas and foreign aid.

Shuja Nawaz is the director of the South Asia Center at the Atlantic Council. This piece originally appeared in Dawn. Photo Credit: Getty Images