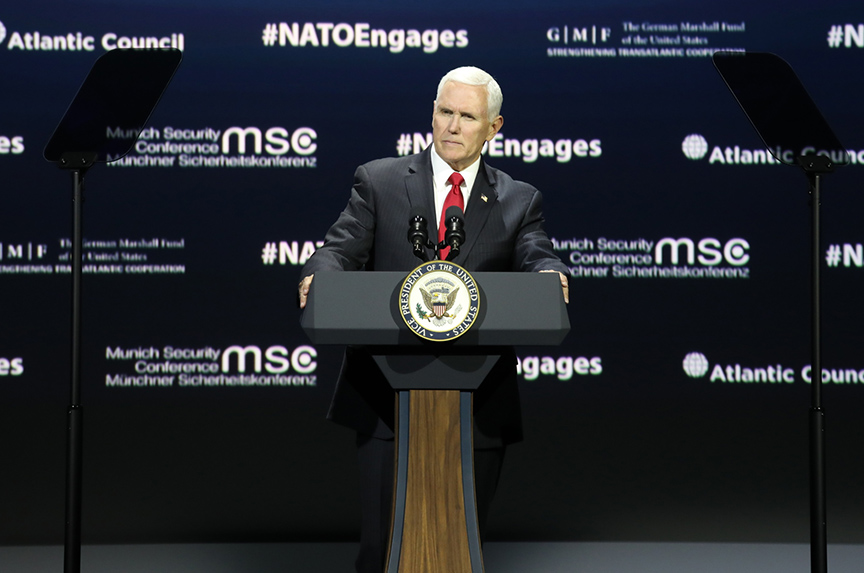 US Vice President Mike Pence on April 3 chastised Germany for not spending enough on defense, warned Turkey against going ahead with the purchase of a Russian missile defense system, cautioned against the rise of China, and sought to reassure NATO allies that they will always have the United States’ support.

US President Donald J. Trump has led the charge against NATO allies who do not meet the 2 percent of GDP defense spending target set at the Alliance’s Wales Summit in 2014. All allies are supposed to meet that goal by 2024. So far only seven of NATO’s twenty-nine member states meet that target; Germany is among those that lag behind.

On April 3, the eve of NATO’s seventieth anniversary, it was Pence’s turn to take allies to task.

“NATO is a mutual defense pact, not a unilateral security agreement,” Pence said in remarks at NATO Engages, a daylong conference jointly hosted by the Atlantic Council, the German Marshall Fund of the United States, and the Munich Security Conference in Washington.

Pence excoriated Germany for not spending more on defense. “More of our allies are now meeting their commitments, but still others are falling short. And, as we all acknowledge, Germany is chief among them,” he said.

He noted that the annual report to parliament in Berlin last year revealed “glaring deficiencies in Germany’s military readiness.”

“And yet, as we stand here today, Germany still refuses to make the necessary investment of two percent of its GDP to our common defense,” the vice president said. “After great prodding it agreed to spend only 1.5 percent of its GDP on defense by 2024, but the draft budget for 2019 just presented to German parliament actually falls short of even that commitment, promising only 1.3 percent.”

“Germany must do more,” said Pence.

The vice president then turned his sights to Germany’s relationship with Russia. “We cannot ensure the defense of the West if our allies grow dependent on Russia,” he said.

Pence said that if Germany persists in building the Nordstream 2 energy pipeline, which would bring gas from Russia to Germany, it could, as Trump has said in the past, “turn Germany’s economy into literally a captive of Russia.”

“It is simply unacceptable for Europe’s largest economy to continue to ignore the threat of Russian aggression and neglect its own self-defense and our common defense at such a level,” said Pence, “and it’s also wrong for Germany to allow itself to become energy dependent on Russia.”

“NATO is a mutual defense pact, not a unilateral security agreement. We need all allies to contribute to this joint endeavor. And we honor their commitments and we will keep ours,” the vice president said.

Pence, insisting that the United States is once again leading on the world stage, said: “Part of leadership is being as good as your word and holding your friends to their word.”

The vice president also pointed out that Trump is not the first US president to ask allies to contribute their fair share toward common defense. In fact, he added, in 1963 John F. Kennedy had registered a similar complaint.

A warning to Turkey

Pence also had strong words for another NATO ally: Turkey.

“We have… made it clear that we will not stand idly by while NATO allies purchase weapons from our adversaries; weapons that threaten the very cohesion of this Alliance,” said Pence.

The Trump administration this week prevented Turkey from receiving equipment related to the F-35 fighter jet unless Ankara cancels an order of the Russian S-400 Triumf missile defense system, which US officials say will compromise the security of the F-35.

This purchase, said Pence, “poses grave danger to NATO and to the strength of this Alliance.”

In remarks at NATO Engages earlier in the day, Turkish Foreign Minister Mevlüt Çavuşoğlu insisted that Turkey’s purchase of the S-400s is a “done deal and we will not step back.”

Pence said the “fact that Turkey is moving ahead with these plans even after the United States has made available the Patriot air defense system is deeply troubling.”

Echoing the Pentagon’s April 1 warning to Turkey, Pence said: “If Turkey completes its purchase of the Russian S-400 missile system, Turkey risks expulsion from the joint F-35 program, which will harm not just Turkey’s defense capacity, but it may cripple many of the Turkish component manufacturers that supply that program.”

“Turkey must choose,” said Pence. “Does it want to remain a critical partner of the most successful military alliance in the history of the world or does it want to risk the security of that partnership by making reckless decisions that undermine our alliance?”

Çavuşoğlu had pushed back against such choices statements declaring that Turkey’s relationship with Russia does undermine NATO. “Turkey doesn’t have to choose between Russia or any others. And we don’t see our relations with Russia as an alternative to our relations with others. And nobody, neither West nor Russia, should or can ask us to choose between,” the Turkish foreign minister said.

Pence described the rise of China as “the greatest challenge NATO will face in the coming decades.”

Pence added: “Whether we like it or not, the implications of China’s rise will profoundly affect the choices NATO members will face, individually and collectively.”

In March, Italy became the first member of the G7 to sign up to China’s Belt and Road Initiative despite opposition from the United States and the European Union.

“China’s expanding influence will necessarily demand more of America’s attention and resources,” said Pence, adding, “and as we meet that challenge our European allies must do more to maintain the strength and deterrence of our transatlantic alliance with their resources.”

Pence defended the US decision to withdraw from the Intermediate-Range Nuclear Forces (INF) Treaty saying that the United States will “no longer agree to any measure of any treaties that force unilateral disarmament on us or our allies.”

In February, the Trump administration announced its decision to withdraw from the INF Treaty over Russian noncompliance with the Cold War-era pact. US withdrawal will go into effect in August.

Pence said that unless honors its INF Treaty obligations and “agrees to the verifiable destruction of all the violating missile systems, Russia will bear the sole responsibility for America’s withdrawal within the next six months.”

A commitment to NATO

Speaking on the eve of NATO’s seventieth anniversary, Pence said: “The Alliance at seventy has never been stronger.”

Acknowledging that Trump’s “strong leadership” has caused consternation among some allies, Pence said: “When President Donald Trump calls on our NATO allies to live up to their word, to live up to the commitments that they have made to our common defense, that’s what we call being leader of the free world.”

The good news, Pence added, was that Trump’s strong stance on defense spending has borne results.

NATO Secretary General Jens Stoltenberg echoed this position in his address to a joint meeting of the US Congress earlier on April 3.

Pence said that for seven decades United States has “stood with our European allies to defend our way of life.”

“The United States has been faithful to Europe for generations, and we will keep the faith,” said Pence. “We share a past. We built it together. And we share a future. Today, tomorrow, and every day you can be confident that the United States of America is now and will always be Europe’s greatest ally,” he added.