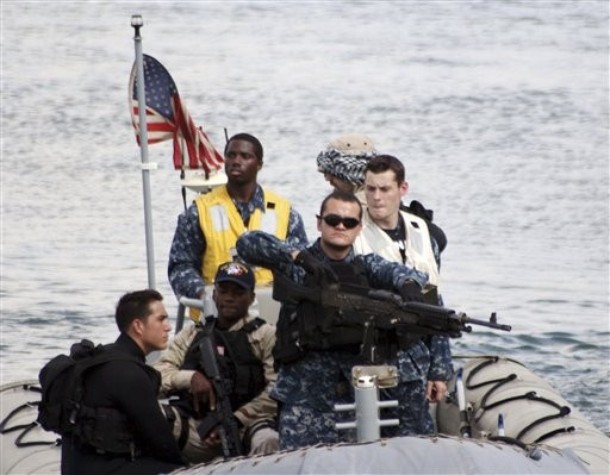 Combating the scourge of maritime piracy has emerged as a promising area of cooperation between NATO and the Russian Federation.  During last month’s annual NATO-Russia Council (NRC) meeting, Moscow’s Ambassador to NATO, Dmitry Rogozin, called for “detailed discussions” on how best to coordinate counter-piracy efforts off the Somali coast, and proposed organizing NATO-Russian naval patrols in the Gulf of Aden as well as in other pirate infested waters." Rogozin also floated the possibility of joint training exercises specifically aimed at fighting maritime piracy.  NATO welcomed the proposals, stressing the need for “practical cooperation” between Russia and Alliance, and characterizing such cooperation as opportunity to “build a stronger foundation for discussions of areas on which the NRC countries might not agree.”

Just days after the NRC summit, Commodore Michiel Hijmans, commander of NATO’s Operation Ocean Shield counter-piracy mission, hosted Commander Pyotr Podkopailo of the Russian task group on the NATO flagship HNLMS De Ruyte on patrol off the Horn of Africa.  During the meeting, both sides shared information on their respective counter-piracy operations while also discussing potential areas of cooperation and coordination in this critical realm.  Following the consultation, Hijmans observed that “the coordination between our forces is evolving into practical cooperation.  We both have our tasks to fulfill, but we have agreed to look into joint action and exercises where possible.”

Indeed, combating the threat of maritime piracy represents a natural area of collaboration between NATO and the Russian Federation.  The outbreak of a piracy epidemic in 2008 in the Gulf of Aden off the Horn of Africa resulted in an unprecedented wave of international cooperation that witnessed NATO nations and a host of other states sending warships to the region.  As one of the largest and earliest contributors to the international counter-piracy effort, NATO’s role initially focused on escorting UN and World Food Program shipping under Operation Allied Provider, and later expanded to protecting all merchant traffic in the Gulf of Aden.  NATO’s latest mission, Operation Ocean Shield, has seen the Alliance working with several international navies to more effectively and efficiently coordinate multinational efforts to combat Somali piracy.

The Russian Federation similarly has a long history of dispatching its ships to the Gulf Aden to protect merchant and other commercial vessels from pirate attacks, with the majority of its escorts focused on protecting convoys from the Red Sea into the Indian Ocean.  For NATO and Russia to work together in fighting piracy on the high seas is not only logical, but also inevitable, given the convergence of their mutual interests in this area.

Additionally, counter-piracy cooperation between Russia and NATO comes at a time when ties between the two are exhibiting signs of strain.  The Alliance suspended military-to-military cooperation with Russia in 2008 following what it considered Moscow’s disproportionate response to the Georgia conflict, and also suspended formal meetings of the NRC.  Although both have since resumed, counter-piracy cooperation carries with the potential to create a climate that can significantly improve and strengthen NATO-Russia ties and place them onto more solid footing.