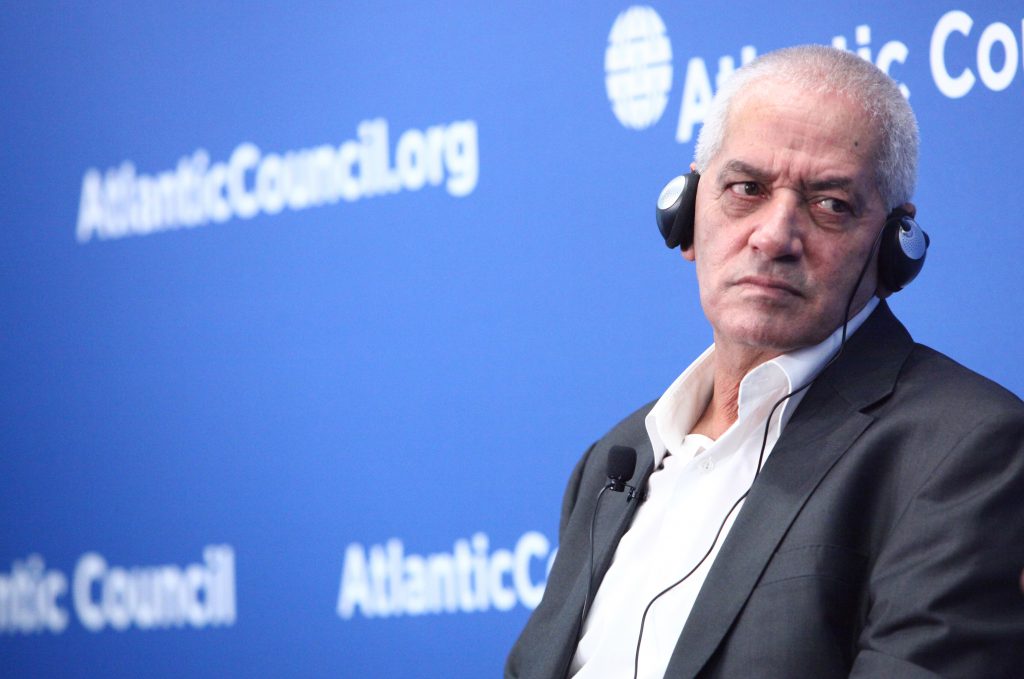 “I told them to be patient, don’t treat Tunisia as a stable … country, because they are asking us to start to embark immediately on major reforms,” Hussein Abassi, the head of the Tunisian General Labor Union (UGTT) that is part of the National Dialogue that won this year’s Nobel Peace Prize, said of international pressure on Tunisia to undertake reforms. Abassi spoke at the Atlantic Council on Nov. 4. (Atlantic Council/Victoria Langton)

The international community must be patient and recognize that Tunisia is undergoing a delicate transition instead of applying unrealistic pressure on the North African nation to undertake reforms, Hussein Abassi, the leader of Tunisia’s powerful labor union and the winner of this year’s Nobel Peace Prize, said at the Atlantic Council on Nov. 4.

“I told them to be patient, don’t treat Tunisia as a stable … country, because they are asking us to start to embark immediately on major reforms,”  Abassi, the head of the Tunisian General Labor Union (UGTT), said referring to those pushing Tunisia to undertake reforms more quickly.

Tunisia is counting on international, particularly American, support for its security and economy, he added.

In a recent issue brief, Karim Mezran and Mohsin Khan, Senior Fellows in the Atlantic Council’s Rafik Hariri Center, noted: “Unless the Tunisian government moves rapidly to turn the economy around, Tunisia could well turn out to be the country where the Arab Spring both was born and died.”

Abassi acknowledged that Tunisia requires economic and fiscal reforms, but said social needs must be considered first. “Reforms … need to be born from within the country and it is not possible to put all this pressure so that in such short period of time we accomplish these reforms,” he said.

His message to foreign governments that want Tunisia to pick up the pace of reforms: “Please talk to us as a country in transition that is still looking [to revive] its economy. Please be patient.”

Abassi said Tunisia needs to reform its labor and investment laws, and predicted that fiscal reform will be undertaken by 2016. Reforms not achieved by the end of 2015 can be achieved in 2016 or even 2017, he added.

Abassi’s UGTT is part of the National Dialogue Quartet that includes the Tunisian Confederation of Industry, Trade and Handicrafts; the Tunisian Human Rights League; and the Tunisian Order of Lawyers. The Quartet won this year’s Nobel Peace Prize for its role in keeping Tunisia on the path to democracy.

The Quartet was formed in response to a political crisis in the summer of 2013, two years after the Jasmine Revolution sparked a wave of Arab Spring pro-democracy uprisings in the region.

Tunisia’s fate turned out much different from that of other Arab Spring countries — Libya, Yemen, Egypt, and Syria — and for that it is often held up by Western officials as a beacon of democratic hope in the region.

“[T]o skeptics who say that democracy can’t make it in the Middle East and North Africa, I reply with one word: Tunisia,” US Secretary of State John Kerry said at the Carnegie Endowment for International Peace on Oct. 28.

Noting that it was only because various civil society groups and political actors set aside partisanship and put Tunisia’s national interests first that the country has managed to stay on a democratic path, Abassi said: “We don’t want to be claiming heroism here.”

Following his address, Abassi participated in a discussion moderated by Francis J. Ricciardone, Vice President and Director of the Atlantic Council’s Rafik Hariri Center on the Middle East.

Located at the center of a region buffeted by war and terrorism, Tunisia’s top-most challenge is security.

Two prominent political leaders — Chokri Belaid and Mohamed Brahmi — were assassinated in Tunisia in 2013. Civil society groups, including Abassi’s, at the time raised the alarm over the threat of terrorism.

This year, Tunisia has suffered two major terrorist attacks — on Tunisia’s National Bardo Museum in Tunis on March 18, and then on a beach resort town north of the city of Sousse on June 26. Tunisian President Beji Caid Essebsi responded to the resort attack that killed more than three dozen people, most of them British tourists, by declaring a state of emergency. The emergency was lifted in October.

These two incidents delivered a “strong blow to the spine of our economy,” said Abbasi, referring to the economy.

Travel warnings imposed by some governments in response to these attacks continue to hurt Tunisia’s tourism industry, he added.

The Quartet’s representatives will receive the Nobel Peace Prize — worth 8 million Swedish krona ($972,000) — at a ceremony in Oslo on Dec. 10.

Abassi hopes the prize will send a message to other labor unions and civil society groups around the world that they, too, can be a force for good if they are truly representative and believe in their national interests.

Another message, he added, is to the world’s major powers: they must create the space for the voice of civil society members and the labor unions to be heard.