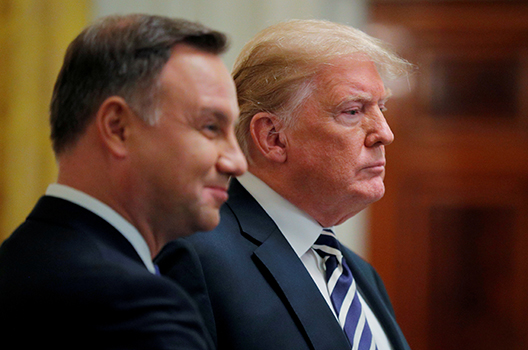 US troop presence in Poland is likely to be at the top of the agenda when US President Donald J. Trump and his Polish counterpart, Andrzej Duda, meet at the White House on June 12.

Pointing to Russian military activity in its neighborhood, the Duda administration has made the case for a permanent US troop presence in Poland at a base Polish officials have suggested they would christen “Fort Trump.” The Polish government has even offered to pay $2 billion to support this base.

Alexander Vershbow, an Atlantic Council distinguished fellow who formerly served as the US ambassador to Russia and deputy secretary general of NATO, predicts Fort Trump is unlikely to materialize.

“The highlight of the Trump-Duda meeting is likely to be an agreement on a set of enhancements to the US military presence in Poland that will increase the overall US presence, now around 4,500 troops, by nearly 1,000 personnel,” said Vershbow.

“There will be no large new base or ‘Fort Trump,” said Vershbow. “Rather, the United States will agree to augment some of its existing capabilities in Poland with a view to shortening reaction times and improving the US capacity to reinforce NATO’s eastern flank.”

“For its part,” Vershbow added, “Poland will agree to finance the upgrading of training ranges for US and allied forces and build permanent facilities for some of the rotational US forces that already deploy on a regular basis to Poland under the US European Deterrence Initiative.”

The Trump-Duda meeting will come days after Polish officials said they had successfully negotiated a larger US military presence in Poland.

The United States leads NATO’s enhanced Forward Presence (eFP) battalion in northeastern Poland, the Suwalki Corridor. There are, at present, around 4,000 US troops in Poland on a rotational basis. The deployment followed Russia’s annexation of Crimea in 2014.

In the National Defense Authorization Act (NDAA) for Fiscal Year 2019, the US Congress tasked the US Department of Defense with producing a report on the feasibility and advisability of establishing a more permanent presence in Poland.

In September 2018, the Atlantic Council established a Task Force on US Force Posture in Europe to consider “the broader political and military implications of an enhanced US presence in Poland and the wider North Central European region.” Vershbow co-chairs the task force alongside retired US Air Force Gen. Philip Breedlove, an Atlantic Council board director and former commander of US European Command and NATO’s supreme allied commander Europe.

Breedlove and Vershbow wrote in the report: “The members of the task force believe that significant enhancements to the existing US presence could be undertaken, while maintaining the framework of deterrence by rapid reinforcement reaffirmed by allied leaders at their 2018 summit.”

The task force established a “set of eight principles that should guide deployments of US forces to Eastern and North Central Europe. Then, the task force designed a set of proposed additional US deployments consistent with those principles.”

Vershbow told the New Atlanticist this week that the measures likely to be agreed during the Trump-Duda meeting “are more modest than those recommended in the Atlantic Council’s ‘Permanent Deterrence’ report and fall well short of earlier Polish requests that an additional US reinforced brigade or division be stationed permanently in Poland.”

“As such, the force enhancements are consistent with efforts by NATO since Russia’s 2014 invasion of Ukraine to bolster deterrence along the Alliance’s eastern flank, including the four enhanced Forward Presence battalions in the Baltic States and Poland,” Vershbow said.

He added: “While some allies may complain that bilateral deals of this kind jeopardize allied solidarity, most allies will be relieved that the changes are more evolutionary than revolutionary.”

Announcing Duda’s visit, the White House said Trump and the Polish president will “discuss the growing United States-Poland strategic partnership and a range of mutual interests, including defense, security, energy, and trade matters.”

Image: US President Donald Trump stands with Poland's President Andrzej Duda at the conclusion of a joint news conference in the East Room of the White House in Washington, US, September 18, 2018. (REUTERS/Brian Snyder/File Photo)