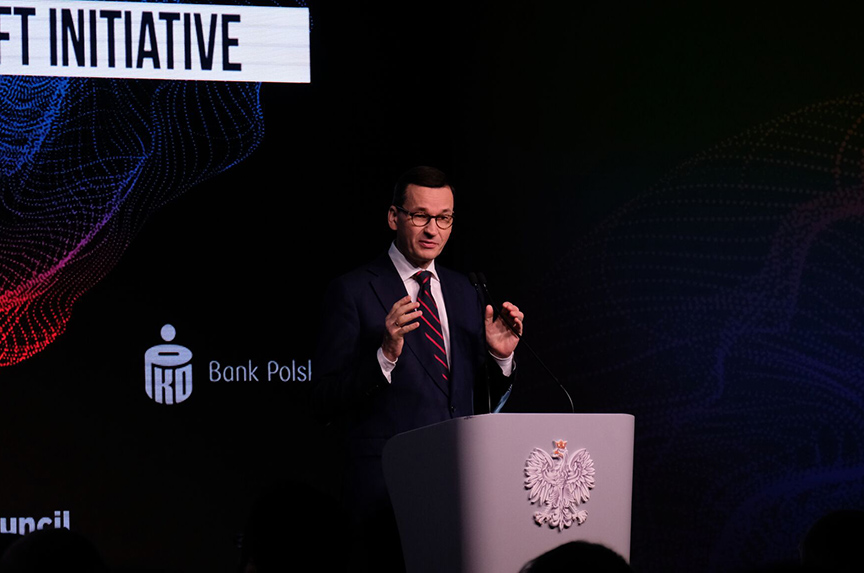 “I call on you today and encourage your leaders and governments to spend more money on cyber warfare, as we do, on cyber soldiers to protect our Internet frontier,” Morawiecki said on the opening day of a two-day conference jointly hosted by PKO Bank Polski and the Atlantic Council in Warsaw, Poland.

“Our enemies will not wait,” Morawiecki said, adding, “They are arming up as we speak. Only a collective response will keep he threat at bay, and only a decisive one.”

The conference, “A New Initiative for Poland: A Future Global Leader in Securing the 4th Industrial Revolution,” seeks to deepen US-Polish ties by developing cybersecurity as a key pillar in the relationship.

The Polish prime minister said it is crucial to grasp the importance of the threat in cyberspace. He added: “The world is connected nowadays more than ever. If one of our partner’s weakness is exposed we are all exposed. Not having a cyber defense policy today is equal to not having an army.”

What’s more, he said, “cybersecurity is a complex ecosystem. No Western country can manage it in isolation from one another.”

Retired US Gen. Keith Alexander, a former commander of US Cyber Command, warned that countries like China, Russia, and Iran are using cyber “as an element of national power.”

“That means that we are going to be attacked when they disagree with us. Whether it is our political realm, and we saw that in the elections, or our military realm or economically, cyber is an element of national power,” said Alexander, who is also a former director of the National Security Agency (NSA).

Daniel Fried, a distinguished fellow in the Atlantic Council’s Future Europe Initiative, said the threats in the cyberspace in Europe do not hide behind a cloud of anonymity. “They come from Russia,” he said. “We all know it.”

Fried said he had no doubt that what “Russian disinformation actors are doing in American society—taking existing social tensions and doing their best to exacerbate them by playing both sides—is part of the standard Russian playbook these days, and I suspect in Poland.”

“A policy challenge is to come up with options to combat this and other cyber threats acting within our common traditions of freedom of expression and the rule of law,” said Fried, adding, “Easier said than done, but that is a necessity.”

When it comes to cyber defense, Alexander said: “If we do it right, we can create a collective security, not just for a nation but for allies.”

“Why is Poland so important to the United States and to Europe,” Alexander asked and then went on to explain the answer: “You are the foundation for stability in Eastern Europe. What you do here matters to the rest of Europe and to the world. You have the capability to help set up, not just for Poland but for the Baltic states and others, a much better collective security program in cyber that can help stop much of the attacks that are going on.”

“We can’t defend cyberspace by ourselves. We have to work together. And what I saw at NSA was the importance of working with our allies,” Alexander added.

In his opening remarks, Damon Wilson, executive vice president of the Atlantic Council, said Morawiecki’s “leadership and his efforts to promote innovation, research, and development have contributed to the security and prosperity of Poland, strengthening Poland’s position as a leader in the cyber industry and bolstering US-Polish ties for the future.”

Noting the challenges that lie ahead, Wilson said: “These roadblocks include new threats to the international order, rising challenges to democratic capitalism, significant shifts in major power relations, and fundamental questions regarding how the West, its leaders, and its people would define and execute their role in the world.”

“However, we do know that in these historic moments, leadership from the United States, Europe—with Poland at the forefront—and democratic forces around the world is critical,” he added.

Through the Atlantic Council’s work, “the projects we execute, the ideas we promote, and the communities we build, we are committed to our mission of promoting constructive US engagement alongside our friends and allies to secure the future,” Wilson said.

Wilson noted that the conference in Warsaw builds on the legacy of Marian Adam Rejewski and his colleagues Jerzy Różycki and Henryk Zygalski—three Polish cryptanalysts whose work enabled the British to begin reading the Germans’ encrypted messages at the start of World War II. “This intelligence formed part of what contributed—perhaps decisively—to the defeat of Germany,” Wilson contended.

Describing cyber as having the potential to be a major pillar of cooperation between the US and Polish governments, as well as the private sector, Wilson said: “Through our work, we’ve identified Poland and its neighbors as having the most to benefit from if they can succeed in developing their digital economies… Digitization can be the next driver of sustained growth for the region.”

Ashish Kumar Sen is deputy director of communications, editorial at the Atlantic Council. Follow him on Twitter @AshishSen.

Image: “Our enemies will not wait,” Polish Prime Minister Mateusz Morawiecki said in Warsaw, Poland, on January 16 while urging allies to increase spending on cybersecurity. Morawiecki spoke at a conference jointly hosted by PKO Bank Polski and the Atlantic Council.