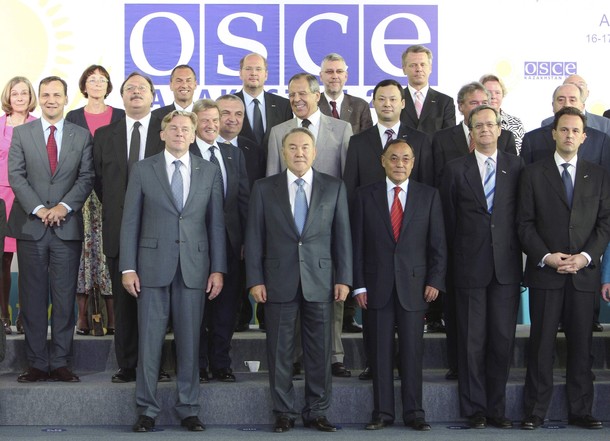 The Organization for Security and Cooperation in Europe (OSCE) is the primary international organization in charge of resolving the Transnistria conflict since 1993. This task forms the basis, and sole raison d’etre, of the OSCE Moldova Mission’s mandate. Russian veto power, however, has prevented the OSCE from making any headway there. Any document on Moldova at the Astana summit should reaffirm the international 5 + 2 format as the sole legitimate negotiating forum, urging not only its immediate reconvening, but the continuation of its meetings after the Astana summit without preconditions. This international format was only convened officially between October 2005 and February 2006. Moscow and Tiraspol recognize it as legitimate to this day, but are setting preconditions on its resumption. Moscow intends to allow another 5+2 meeting to convene before the OSCE summit, as the State Secretary and Deputy Minister of Foreign Affairs, Grigory Karasin, has surprisingly announced in Chisinau (Interfax, July 27).

Undoubtedly, Moscow intends to claim “progress” merely for a meeting and seek a complacent statement of approval in Astana, only to revert to stonewalling afterwards. The Astana summit provides an unprecedented opportunity to endorse Moldova’s call for transforming Russia’s military “peacekeeping” operation into a multinational mission of civilian (mainly police) observers.

The OSCE, as such, is not directly involved in the negotiating process on the Karabakh conflict, although it provides an umbrella for negotiations mediated by the “Minsk Group’s” three co-chairs (the US, Russia and France). Azerbaijan has on the whole accepted the “Madrid Principles,” developed at an earlier OSCE meeting and updated jointly by the three co-chairs afterwards, as the basis for negotiations leading to a settlement of the conflict. Azerbaijan’s endorsement has generated significant potential for progress in the stage-by-stage resolution of the conflict, clearly warranting a positive recognition at the Astana summit.

Meanwhile, Armenia is stalling on its response to the Madrid principles. Yerevan invokes a “St. Petersburg proposal,” attributed to Russian President, Dmitry Medvedev, and is seeking to circumvent or undermine the three co-chairs’ document, although the latter also carries Russia’s signature (Arminfo, July 20).

A discussion of the Armenia-Azerbaijan conflict at the Astana summit may test not only the OSCE, but also Washington’s policy. Recent US ideas to open the Turkish-Armenian border unconditionally, without requiring the withdrawal of Armenian troops from certain districts of Azerbaijan, has thrown the negotiating process off track and encouraged Yerevan’s stonewalling. A reiteration of that border-opening proposal by any party in Astana would again jeopardize progress in the conflict-resolution negotiations. Conversely, incentivizing Armenia to withdraw its troops from those Azeri districts, in return for opening the borders of both Turkey and Azerbaijan to region-wide trade and travel, could decisively advance the settlement of this conflict.

Moreover, the OSCE is the custodian organization of the adapted treaty on Conventional Forces in Europe (CFE) and the Istanbul commitments within the same package in 1999. The OSCE’s Joint Consultative Group of 30 state-parties to the treaty is in charge of monitoring its implementation. Russia repudiated its remaining Istanbul commitments by 2002 with regard to Moldova, and subsequently with regard to Georgia (Gudauta base). After 2003, Russia vetoed all attempts to reference its Istanbul commitments in OSCE documents at the annual ministerial meetings. It also transferred treaty-limited equipment (TLE) unlawfully to its protégés in Transnistria, Abkhazia, South Ossetia, and Karabakh, creating a massive problem of unaccounted-for arsenals that evaded verification and fueled secessionist conflicts. From August 2008 onward, Russia introduced massive forces in the occupied territories of Georgia, defying treaty stipulations on numerical ceilings and verification/inspection of forces. Beyond the protracted conflict areas, Moscow breached the CFE treaty even before “suspending its implementation” officially as of January 2008.

The OSCE’s Kazakh chairmanship is wrestling with these issues in preparing the Astana summit’s agenda (Draft Decision on the Agenda, Organizational Framework and other Modalities of the OSCE Summit, July 20).

The Astana summit is the organization’s first at the level of heads of state since Istanbul 1999. The OSCE can neither avoid a review of compliance with its preceding summit’s decisions, nor afford ignoring the four cases of military occupation. That the OSCE lacks the means to enforce its own decisions (mainly on account of Russian vetoes) is a generally understood fact, which disables the organization from becoming a security actor. However, the OSCE would suffer irreparable damage if it were seen casting aside its own decisions at the highest political level. Annual ministerial meetings during the past decade have generally foundered on Russia’s breaches of the CFE treaty and Istanbul commitments. The Astana summit, however, can take a fresh approach by calling for observance of the principle of host-country-consent to the stationing of foreign troops on their territories, within their internationally recognized borders.