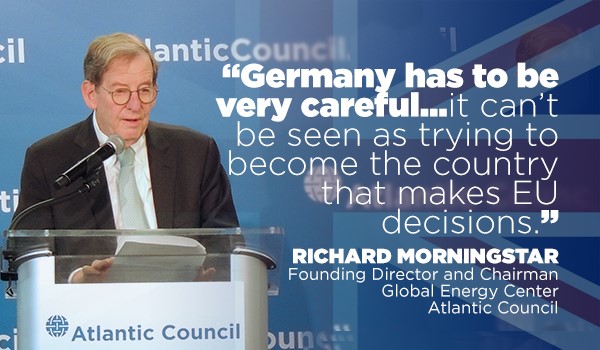 We asked our experts to tell us what the European Union needs to do differently in light of the referendum. This is what they had to say:

Richard L. Morningstar is the founding director and chairman of the Global Energy Center at the Atlantic Council and a former US ambassador to the EU.

The EU has to recognize that it has many issues that it needs to face. There is much dissatisfaction in many countries with policies coming out of Brussels and with the level of transparency with which Brussels operates.

Brussels needs to think a lot about how it can refine its policies to better relate to the concerns of the average citizen. It should be a long time before Brussels takes as a lesson that it needs to become more federal. That would be very difficult, at least over the next couple of years.

Brussels needs to address specific problems like its fiscal and monetary policies, whether austerity makes the most sense in certain countries, and how the migration issues will be addressed. One way or the other, the EU has to gain the confidence of the populace.

Q: Given the prevailing climate in Europe—especially challenges related to the economy and migration—is there political space for Brussels to undertake reforms?

Morningstar: There may be pushback from some governments. There is very limited bandwidth to do anything that would require changes in the treaties. The worst thing that could happen now within the EU is that there be referenda in other member states on important issues. The EU traditionally has not done very well on referenda and it would be in a particularly weak state now. The immediate action that Brussels has to take is to work through migration, fiscal, and monetary policies that make sense and could create more confidence among EU citizens.

Q: What role do you expect Germany to play in the EU now that the United Kingdom has decided to leave?

Morningstar: Germany has to be very careful. It is a large country with a strong economy, but it can’t be seen as trying to become the country that makes EU decisions. It needs to work to gain cooperation, not just among larger countries such as France, but among all the member states and particularly among states in central, eastern, and southern Europe.