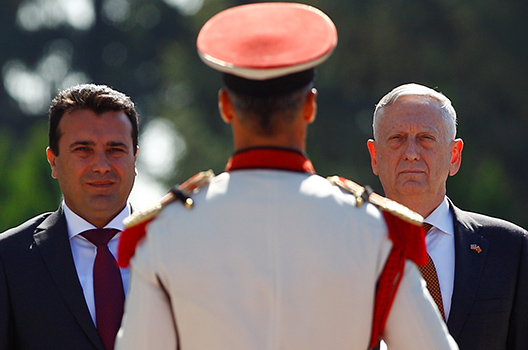 On April 2, 2008, then US President George W. Bush addressed other NATO leaders at their Bucharest Summit, arguing forcefully for the Alliance to extend an invitation to Macedonia. His administration had championed Macedonia’s membership aspirations as part of a strategic enlargement of NATO into the Western Balkans, also to include Albania and Croatia, and to advance a Europe whole, free, and at peace.

As Athens and Skopje failed to settle a name dispute, Greece was unwilling to welcome Macedonia under its interim name (the Former Yugoslav Republic of Macedonia) and the Alliance did not extend an invitation.

A decade later, Bush is once again voicing his support for Macedonia’s aspirations. His office released a message this week encouraging Macedonians to vote in a September 30 referendum that will pave the way for NATO to welcome its 30th member and resolve the twenty-seven-year name dispute.

This message is significant as Bush’s role and legacy on this issue is unparalleled.

During Bush’s administration, the United States helped broker the historic Ohrid Accords, pulling Macedonia back from the brink of civil war. The administration also pushed to resolve the long-standing dispute between Greece and Macedonia over the latter’s name. Upon the dissolution of the former Yugoslavia, Greece objected to the new nation’s name as Greece’s northern province is also known as Macedonia. This objection led the new nation to be recognized as the “Former Yugoslav Republic of Macedonia.”

In Bucharest, Alliance leaders were able to agree only to extend an invitation to Macedonia upon the resolution of the name issue. Nonetheless, Bush invited then Macedonian Prime Minister Nikola Gruevski to join him in a meeting and celebration of enlargement when he visited Zagreb, Croatia, immediately following the NATO Summit.

For these reasons, Bush is respected in Macedonia across the political spectrum and is well known and appreciated by large swaths of the electorate, both ethnic Macedonians and ethnic Albanians, and left and right.

Ten years since the Bucharest Summit, we are at a critical juncture where Macedonia’s new government has taken courageous steps to reach a deal with Athens to call its country the Republic of North Macedonia. If approved by the people of Macedonia and the Greek parliament, Macedonia is on track to become the 30th member of NATO and to begin EU accession.

In fact, at the most recent NATO Summit in Brussels in July, Alliance leaders invited the government in Skopje to begin accession negotiations—a major breakthrough—with final accession depending on approval of the Athens-Skopje name deal. The Trump administration strongly supported this outcome and worked effectively behind the scenes to advance this deal prior to the summit. US Secretary of Defense Jim Mattis and Assistant Secretary of State for European and Eurasian Affairs Wess Mitchell visited Skopje earlier in September to help build support for the deal.

The Macedonia government has now won several tough votes in parliament in support of the name deal, paving the way for the referendum on September 30.

This may be a now-or-never moment for Macedonia. Its failure to gain accession to NATO in 2008 ushered in a decade of stagnation and political crisis, which the country is poised to overcome.

In his message, Bush voices strong support for Macedonia’s entry into NATO and the name agreement (the Prespa Agreement), which he called “a courageous and fair compromise.” For the people of Macedonia, it protects their identity and language in an independent, sovereign state. It’s a historic opportunity.

Bush underscores that this vote is about the future of the citizens of Macedonia. Supporting the agreement will allow Macedonia to join NATO and the EU—something Macedonia’s citizens and its friends, including the United States—support.

A core team at the Atlantic Council, where I serve as executive vice president, has played a consistent role in supporting this process in partnership with the Ohrid Group, led by a member of the Atlantic Council’s International Advisory Board, former NATO Secretary General George Robertson.

Our Digital Forensic Research Lab is mounting an #ElectionWatch effort to monitor via open sources efforts to spread false information and influence the vote. Our Future Europe Initiative is leading an effort, #NowIsTheTime, to provide a platform for local, especially younger, voices to share their stories of why this vote matters.

Ultimately, this decision does not rest upon international voices or back-room diplomacy. The message from many in the international community is that we strongly support Macedonia and its future as our ally. This decision, however, is one for the citizens of Macedonia. Only they will determine the path their nation takes on September 30.

Damon Wilson is executive vice president of the Atlantic Council. From 2007 to 2009, he served as special assistant to the president and senior director for European Affairs at the National Security Council.  Follow him on Twitter @DamonMacWilson.