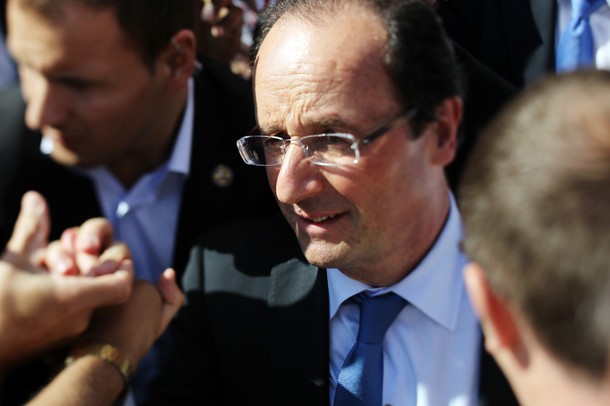 If François Hollande, the Socialist Party challenger to Nicolas Sarkozy, is elected president of France on May 6, he will face an immediate sizing-up of his leadership at the G8 and NATO summits on the morrow of his taking office on May 17.

He should be expected to arrive at those summit meetings as a full-stature President of the Republic, totally prepared, supported by the whole apparatus of the French State. Transition briefings are already well underway with the policy teams in both major political camps. In the handover period between May 6 and May 17, the country’s top civil servants as well as the outgoing administration will ensure that France is at her best at the G8 and NATO meetings. At a personal level, Hollande has all the gravitas and confidence required to act as president, even if Sarkozy, as his electoral opponent, wishes to convince the world otherwise.

Indeed, Hollande’s foreign and defense policy may be expected to be at least as robust as that of Sarkozy. If anything, his international stance may be more reminiscent of Gaullist independence, rather than Sarkozy’s keenness to display himself as a ready ally.

The formal inauguration date of the next French president is May 17. The G8 summit takes place at Camp David on May 18 and 19, followed by the NATO summit in Chicago from May 19 to 21. A new President Hollande would need to make a quick turnaround, but this is already anticipated and planned for.

Hollande made a major foreign and defense policy speech in Paris on March 11, which was overshadowed by a huge Sarkozy rally at Villepinte the same day. Yet Hollande’s policy statement sets out a position of absolute national independence supported by a strong defense establishment. He spoke of his “responsibility as commander in chief,” provided “a vision of the world and a vision of France,” called for consistency in choices and decisions, and referred to a strong defense as “the instrument of national independence.” Hollande vowed to maintain France’s strength in counterterrorism, in preparation for cyber attacks, and in nonproliferation (including maintaining France’s independent nuclear weapons capability both land-based and submarine-borne). He promised to “construct an industrial policy in defense,” which provides jobs at home, and included SMEs in that industrial policy. He stated his goals as “promoting values, serving peace” while “never diminishing the defense of our national interests.” He talked tough on Iran and even tougher against Syria’s President Assad.

Hollande stated clearly that French troops will be withdrawn from Afghanistan by the end of 2012, which is also one of his “60 Commitments for France.” He said that he would inform the allies of this decision at the NATO summit right after taking office and that the French withdrawal would be coordinated appropriately with them. He said again that he would “assess” (but not “re-assess”) France’s position in the combined command structure of NATO. He and others on the left believe that Sarkozy re-entered the combined command with too little to show for it — despite France’s having secured, for example, the command of the NATO transformation structure in Norfolk, Virginia. Hollande called for a new defense white paper, even though the most recent one, widely recognized as a masterpiece of grand strategy, dates only from 2008. Hollande also stressed the need for a European defense force capable of acting independently from NATO.

These positions resemble France’s foreign policy from Charles de Gaulle to Jacques Chirac — across party lines and across generations — and they differ from Sarkozy’s policy more in tone than in substance, for, however much Sarkozy has played the willing ally, he has remained always, in his own phrase, “allied but not aligned.”

What, then, should France’s friends expect from, and how should they react to, a President Hollande? Three conclusions stand out.

First, expect no strategic change in any element of France’s external policy, least of all any weakening of the knees — starting at the G8 and NATO summits, and thereafter.

Second, France’s friends should make it a point to cultivate the leaders from the left. Hollande himself, like his campaign manager and expected foreign minister Pierre Moscovici, is a former young leader of the French-American Foundation (as is Hillary Clinton), but the Socialists, whose networks in Europe are fairly strong, are less well introduced in the US. Americans in particular should draw them in to policy circles.

Third, as an extension of that cultivation, policymakers across the Atlantic should seek out areas where the Atlantic partners can make policy together, beyond defense and security, where they are already operating largely in tandem. Given Hollande’s preferences for more vigorous stimuli, economic growth could be a place to start. Hollande has pledged a new African policy and collaboration on development, not least in Africa, could be a priority. Looking at other larger issues of the twenty-first century, policy initiatives in the areas of water, energy, and the environment — all left by the wayside but all areas in which France displays world-leading industrial excellence — are open for joint transatlantic initiatives under French-American leadership.

A President Hollande on May 6 would therefore represent both continuity on essentials and an opportunity to innovate in global policy-making.

Nicholas Dungan is a senior fellow in the Transatlantic Relations Program at the Atlantic Council. He can be contacted on [email protected].