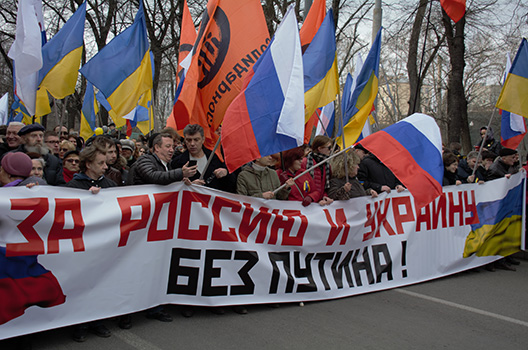 The corrupt bargain on which Russian President Vladimir Putin built his regime, provision of wealth to loyal officials and a decent standard of living to the people, is in dire straits. As the economy shrinks and the Kremlin adjusts its expenditures, Putin must be aware that the threat of a coalition of disgruntled officials and powerbrokers—aiming to restore their prosperity—grows daily. With no intention of being deposed in a palace coup, Putin has gone on the offensive, striking the Russian political elite off-balance through mass dismissals and early elections. This threatens to disrupt established patronage networks and political stability across Russia. As for the Russian people, Putin failed to curb corruption or reform the economy for fifteen years. He won’t do so now that he is on emergency footing, and average citizens will suffer as a consequence. As their situation deteriorates, Russians will not tolerate Putin’s fruitless and autocratic tendencies. The coming chaos among the elite—and hardship for ordinary people—will destabilize Russia in the long term.

Economic Crisis
The collapsing ruble, Western sanctions, Putin’s own ill-designed “countersanctions,” and increasing nationalist fervor prompt dramatic capital flight. By some estimates, capital flight in April was around twice that month’s 1.6 percent drop GDP. On June 15, the Russian statistics agency Rosstat reevaluated its estimate of GDP shrinkage from 1.9 percent to 2.2 percent. On June 11, Russian Prime Minister Dmitry Medvedev stated that government income had fallen while expenses actually rose by 3.7 percent. OPEC’s flooding of the oil market ensures that Russian crude production will increase to maintain revenue, swamping the market and depressing prices. Putin’s December 2014 budget was based on oil at $100 per barrel. The projected 2015 Brent crude price is $61 per barrel. In response to these shocks, Moscow slashed investment projects by a third, including development of the Far East, Kaliningrad, and the North Caucasus. Many Federal Target Programs and Federal Targeted Investment Programs will undergo severe cuts and may be seriously underfunded. Should the crisis persist through 2017, the Kremlin could deepen the investment cuts by 42 percent.

Preemptive Offensive
Recognizing the danger that these cuts may breed dissatisfaction within the government, Putin launched a preemptive offensive. He kicked off his campaign in April by tearing through the security chieftains, the siloviki. On April 6, he gutted the Ministry of Emergency Situations, firing nineteen officials from leadership positions across the country without appointing successors. He moved on the powerful Ministry of Internal Affairs, dismissing its Samara office head; naming new leadership for its branches in Krasnodar, Perm, and Stavropol; and replacing the chief of its technology and information department. Putin also posted two new officials to the St. Petersburg and Transbaikal investigative committees. The next day, he struck at the top of the Kremlin itself, replacing the head of the FSB’s counterintelligence division. On April 9, Putin replaced the head of Internal Affairs in the conflict-ridden Kabardino-Balkaria Republic, and on June 10, Putin fired the Novosibirsk oblast Chief of Police after he permitted opposition leader Aleksei Naval’niy to organize a “Party of Progress” meeting.

Putin also ran more nuanced campaign against provincial governors. Between April 16 and June 10, Putin fired fourteen governors. Ten of these governors, were named “acting governor” until September. Should these leaders fail to adequately support Putin and quell opposition within their regions, they will presumably lose these elections and someone more malleable will take their place. Putin offered no such hope for the governors of Krasnodar, Penza, or North Ossetia, replacing them outright. The threat of early elections extends beyond the federal subjects. On June 11, MP Igor Lebedev, Speaker of the Duma and member of United Russia, announced a bill to move Parliamentary elections forward from December to September. This political disruption will shock established patronage networks. The disoriented political elite will be more unpredictable than loyal.

Public Hardship
While acknowledging that Russia suffers severe economic conditions, Medvedev claims that the government will do more with less on social spending. However, hard numbers refute his claims. Rosstat’s June 11 report saw a year-on-year increase in Russians receiving less than the living wage by 3.1 million people in 2015, up to 15.9 percent of the population. Food prices are up by 17.9 percent, and the cost of non-food products and services increased by 17.7 percent and 16.2 percent respectively. April saw wages fall by 4 percent. Experts are increasingly projecting a sharp spike in the price of medicine. In March, sources from the Moscow city government and Ministry of Health leaked plans to fire around 14,000 health care professionals and close several branches of local hospitals by 2017. Many, including former Finance Minister Alexei Kudrin, claim that the real crisis is still yet to come.

These new hardships are further exacerbated by the failure to reform the Russian economy or judicial system. For instance, reiderstvo, often translated as “raiding” or “asset-grabbing”, continues unabated, allowing local power brokers to seize private assets without reproach. The role of state officials in reiderstvo operations is expanding, and some argue that instances of reiderstvo are increasing over time with tacit official support. The Kremlin may expand such opportunities in place of providing direct pay-offs. For instance, the 2014 “foreign agents” law allows Russian officials to declare any foreign firm an “undesirable,” seizing its assets. Predatory officials and the collapsing standard of living will inhibit Russians from improving their lives in any meaningful sense.

As the drivers of the collapse persist, the economic crisis will grind on unabated. The public supports Putin’s authoritarianism because it provides order and prosperity. This crisis undermines the core tenants of Putin’s social contract, delegitimizing his regime and widening the gap between the ruling and the ruled. And ordinary people are mobilizing. Throughout 2014, businesses banded together to form mutual defense associations in answer to aggressive and corrupt bureaucrats. In November 2014, more than a thousand people marched through Moscow, St. Petersburg, and Vladivostok to protest health care cuts.

And despite the supposed support for Putin and his war in Ukraine, general discontent is spilling over into politics. In September 2014, 20,000 people marched against Russia’s aggression in Ukraine. This dissatisfaction held strong through March 2015, with 20,000 marching in memorial for Boris Nemtsov and tens of thousands protesting the war in Ukraine. Protests are continuing throughout 2015, with thousands rallying in Novosibirsk and Petrozavodsk against government corruption and censorship. This does not signal a united and coherent opposition to the government, but rather suggests a leaderless and pervasive discontent, which government is increasingly unable to control. This may lead to a push against Putin’s regime, but it is just as likely to grow erratic and destabilizing.

Putin rose to power, and kept it, by promising wealth to his supporters and a better quality of life for the masses. Today, the economic crisis is stripping him of the ability to fulfill his obligations. Putin can clamp down on the political elites, but destabilizing the politicians is likely to only cause more uncertainty. Furthermore, restarting growth for the people would require far too much in terms of reform and reorientation to be palatable. If Moscow cannot uphold its end of the social contract, it can expect only social unrest and instability to result.