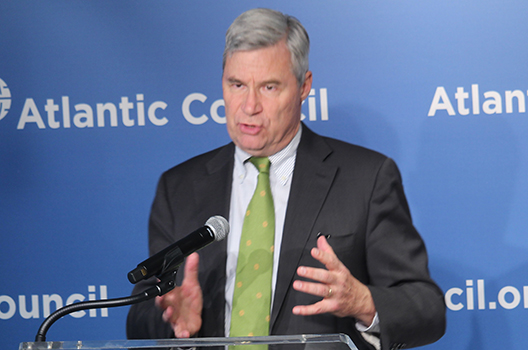 US Senator Sheldon Whitehouse (D-RI) speaks at the Atlantic Council on May 7, 2019.

The ability for Russian President Vladimir Putin and his oligarch allies to hide money in banks and real estate in the United States is “a real strategic danger,” US Sen. Sheldon Whitehouse (D-RI) warned on May 7.

The senator lamented the fact that the United States is “now number two in terms of the nations that support secret financing and funding and allow for the hiding of assets behind shell corporations. We should not be on that list at all, much less number two.”

Whitehouse spoke at the launch of a new book, Russia’s Crony Capitalism: The Path From Market Economy to Kleptocracy, by Anders Åslund, a senior fellow with the Atlantic Council’s Eurasia Center. Åslund’s book details how money taken from Russia’s state-owned enterprises and resource wealth is funneled out of Russia in order to enrich Putin and his oligarchic allies. Much of this wealth, Åslund explained, is “held predominantly in the United States and the United Kingdom, the two countries with good rule of law that allow anonymous companies on a large scale and have deep financial markets.”

Åslund argues in his book that the United States should act swiftly to stop enabling this kleptocracy. It can do this by demanding “full transparency of these vast financial holdings and that means stricter anti-money laundering controls in Europe and to reveal all ultimate beneficiary owners” in the United States, he said. Whitehouse agreed that the United States can no longer allow Putin or his allies to safely store their wealth anonymously in US real estate and banks.

The United States has “to draw a really hard line as if this were any other kind of invasion or incursion and we have to demand transparency of ourselves,” Whitehouse argued. “We cannot let our corporations become the tool of foreign kleptocrats.”

Åslund said that “Putin is about two things: power and wealth.” The Russian president has allowed his friends and allies to remain in charge of large state-owned enterprises, despite huge financial losses for each of these corporations, Åslund explained. “Putin did not care about the efficiency, social values, or profitability of state companies. He wanted control through loyalists in charge who transferred the surplus of the companies toward him and his friends,” he said.

Because their assets are largely kept offshore, Åslund added, “naturally, Putin and his cronies cannot enjoy their wealth. It is all about power. If they are not the wealthiest, they fear they will lose power.” But the anonymity provided in US and UK law to ultimate financial beneficiaries allows Putin and his allies to remain wealthy while preserving the trappings of democratic legitimacy.

“All of the evidence is locked behind a wall that you will never get you hands on,” Karen Greenaway, former supervisory special agent in the Federal Bureau of Investigation’s International Corruption Unit, explained. Without being able to prove where the money ultimately goes, she added, it is “very, very difficult for law enforcement or investigative journalists to have some idea of what [Putin’s] net worth is,” for example.

Michael Carpenter, a senior fellow with the Eurasia Center and senior director of the Penn Biden Center for Diplomacy and Global Engagement, explained that this power and wealth motivation extends to the Kremlin’s aggression against neighbors like Ukraine, Georgia, and the Baltics, as well as its involvement around the world, from Syria to Venezuela. Putin is motivated, Carpenter argued, by maintaining “a sphere of kleptocratic, authoritarian client regimes… because that allows him to perpetuate his wealth and power.”

As the United States looks to counter Russian influence in Europe and across the world, therefore, Whitehouse argued that it first must make sure that Washington is not aiding and abetting “our enemy, our rival.”

Whitehouse said that the United States is confronting a “clash of civilizations,” alluding to reports that the US Department of State is using the phrase coined by academic Samuel Huntington to describe growing geopolitical competition with China, but argued that this clash is between “rule-of-law civilizations” and “autocracies and kleptocracies.”

As a defender of the rule of law against kleptocracies, “we have to look the part… and make the power of our example an asset for our nation rather than an obstacle,” the senator said. “We are not meeting that test right now.”