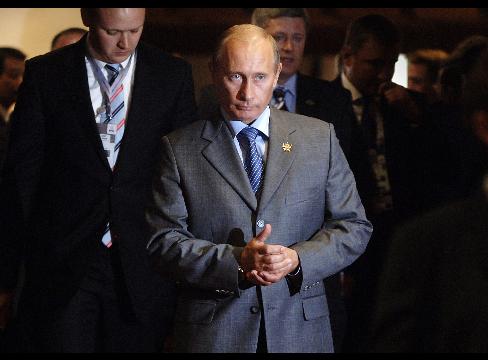 In the past year, Russian President Vladimir Putin has morphed from a noisy irritant to the West who was reaching the end of his two-term limit to a swaggering antagonist who isn’t going away. At least that’s the view of senior Bush administration officials, who increasingly see Russia as a rising strategic challenge. They fear a serious and perhaps even dangerous showdown with Russia later this year over the independence of Kosovo as a breakaway Serbian province. It’s just one of several explosive brewing disagreements. Putin’s threat to retaliate by then declaring the Georgian region of Abkhazia to be independent may sound esoteric. Yet one senior official talks about the ugly events that may well follow: an Abkhaz ethnic cleansing of Georgians in the region, a Georgian military move to protect its minority, followed by armed Russian intervention and then Western retaliation of some kind. The best U.S. foreign policy minds don’t believe Putin wants that sort of open conflict with the West, but they worry that in his current mood he may get it by overreaching. And unlike the floundering President George W. Bush, Putin is defying lame-duck status. He has deftly maneuvered the Russian political system so that March elections won’t end his reign. Common Interests What’s needed now, as U.S. Secretary of State Condoleezza Rice and Defense Secretary Robert Gates plan an October mission to Moscow, is a re-energized engagement on common U.S. and Russian interests: stopping the development of an Iranian nuclear bomb, fighting Islamist terrorism and perhaps reaching a deal that would allow them to work together on missile defense. The U.S. and Europe at the same time have to speak with a more determined voice with Russia on issues such as Kosovo and Georgia so that a miscalculation doesn’t lead to an unwanted fight. The message has to be subtle but unmistakable: the West won’t be bullied, but the door also is open to Russia’s integration into the West, where its history and economic interest should naturally lead it. The trick will be to pull this off with Russian anti-U.S. sentiment at fever pitch, with high energy prices fueling growth and Putin smelling Bush’s weakness like a Russian bloodhound. A senior official says that Russia’s mood is reminiscent of the mid-1970s, when Soviet leader Leonid Brezhnev believed that post-Watergate America was vulnerable. The result was the Russian invasion of Afghanistan. Munich Speech The Bush administration’s divisions about how best to deal with Russia have grown since Putin’s speech at the Munich Security Conference early this year signaled the shift to a more aggressive policy. “One country, the United States, has overstepped its boundaries in every way,” he said. His surprised listeners chalked up the speech to Russian pre-election politics and Putin’s need to articulate rising resentment over Russia’s Cold War defeat and an aftermath that brought Western institutions such as the European Union and NATO to its borders. Since then, however, it appears the speech marked the beginning of Russian reassertion, pushing back on the changes of the 1990s that broke off the Baltics, the Caucases and Ukraine from the Soviet Union and ended its empire. Bush has urged restraint toward Russia. His point has been that the threat to the U.S. in the 21st century is Iran and radicalized Islam, not Russia. Yet a growing faction of U.S. officials believe giving Putin too much ground only encourages him to take more. These advocates of greater cooperation often wind up frustrated as areas of disagreement proliferate. Retaining Power Some U.S. officials figured Putin would be unable to maintain power after March elections and they thus could start anew. That has also changed. By naming the relative unknown Viktor Zubkov as prime minister earlier this month, followed by Putin’s suggestions that Zubkov could run and win the presidency, he made clear term limits were little impediment to his ability to be the country’s chief string-puller. Because the law only prevents successive terms and the prime minister’s job may also be open to him, Putin’s ability to hold power is virtually assured. In any case, resign yourself to many years of “Putinism,” the political and ideological system that Putin has spent eight years installing and which may have just as long a life in the 21st century as Stalinism had in the 20th. Putinism at Work Under this system, a strong and unaccountable executive holds power over a pliable media and subservient legislature, judiciary and regional and local political structures. Former and current state security officers — once known as KGB but now FSB — have custody of everything from Russia’s nuclear weapons to its oil wells and natural-gas fields. In foreign affairs, Putinism is brash and muscular, wielding Russia’s energy weapon more effectively than it ever did nuclear weapons in order to influence neighbors and entice friends. Yet diplomacy is about dealing with what exists. Putin is here to stay, as is Putinism. Now the U.S. and Europe must adjust and form a robust response. One must avoid needless fights. But the West can’t compromise on the spread of democracy or Western institutions. These changes serve Moscow’s long-term interests –if only the West can manage a host of escalating short-term dangers.

Frederick Kempe is president and CEO of the Atlantic Council.  Originally published 24 September 2007 by  Bloomberg News. Reprinted with permission.