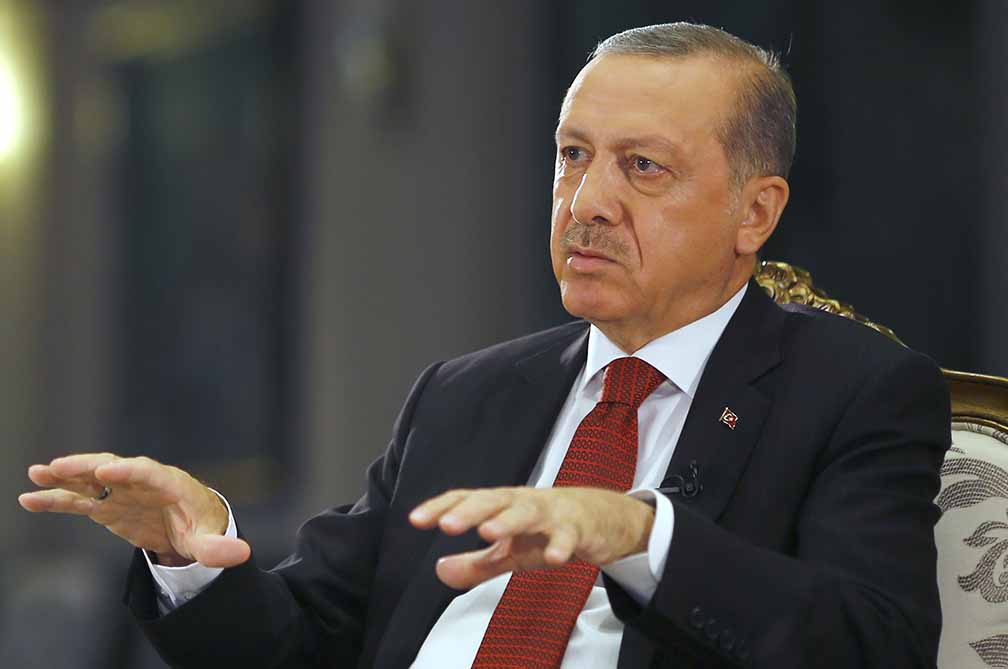 Turkish President Recep Tayyip Erdoğan on July 20 announced a three-month state of emergency in Turkey. “The aim of the declaration of the state of emergency is to be able to take fast and effective steps against this threat against democracy, the rule of law and rights and freedoms of our citizens,” he said. (Reuters/Umit Bektas)

The Turkish government’s crackdown on its opponents must be seen in the context of the trauma inflicted on the country as a result of the failed coup, but it must not come at the cost of the viability of democratic institutions, according to the Atlantic Council’s Aaron Stein.

“In the West, there is this tendency to focus on the purge and how many people have lost their jobs. In Turkey, everybody is still shell-shocked about what happened on [July 15] and are picking up the pieces and trying to reconcile a very traumatic event in their history,” said Stein, a resident senior fellow in the Atlantic Council’s Rafik Hariri Center for the Middle East.

“The concern in Turkey is that unlike France, in particular, the legacy of strong democratic institutions is just not there,” he added.

In France, the National Assembly this week voted to extend by six months a state of emergency that has been in place since the November 13, 2015, terrorist attacks in Paris that left 130 people dead. The vote followed an attack in Nice on July 14 that left eighty-four people dead and wounded more than 300 others.

“There are concerns among a number of Turks—and you are beginning to see this reflected in parliament, particularly from the CHP [the Republican People’s Party], the main opposition party—that the government should not try to take this too far in terms of security measures imposed after the coup,” said Stein.

The Turkish government has unleashed a broad crackdown following a failed coup attempt by some sections of the military on the night of July 15. The swiftness of the crackdown led some Western officials to conclude that it was premeditated. “It looks at least as if something has been prepared. The lists are available, which indicates it was prepared and to be used at a certain stage,” said Johannes Hahn, the EU commissioner dealing with Turkey’s bid to join the European bloc.

More than 58,000 people—including military officers, judges, civil servants, teachers, and police officers—have been affected by the crackdown, which Erdoğan has said is aimed at “cleansing” the “virus” that has spread like “cancer” within the Turkish military and state institutions.

Academics have been prohibited from leaving Turkey and almost a third of Turkey’s top military officers—ninety-nine admirals as well as generals—have been charged in connection with the failed coup.

Erdoğan has accused Fethullah Gülen, a Turkish cleric living in self-imposed exile in Pennsylvania, of orchestrating the coup attempt. The government crackdown is mainly aimed at Gülen’s supporters whom the government accuses of infiltrating some of the posts closest to the president, and of creating a parallel state.

“The Gülen movement has higher unfavorable ratings than Donald Trump. Way higher,” said Stein, referring to the Republican Party’s presidential nominee. “This is not a movement that people in Turkey like and I don’t think anybody is weeping over the Gülenists getting what many believe is deserved.”

Erdoğan has urged the United States to send Gülen back to Turkey “if we are truly strategic partners.”

US Secretary of State John Kerry told CNN that the Obama administration has not received a formal extradition request for Gülen. “Give us the evidence, show us the evidence. We need a solid legal foundation that meets the standard of extradition in order for our courts to approve such a request,” Kerry said.

Aaron Stein spoke in an interview with the New Atlanticist’s Ashish Kumar Sen. Here are excerpts from our interview.

Q: President Erdoğan has announced a three-month state of emergency amid a massive purge following the failed coup. Turkey has also suspended the European Convention on Human Rights. What do these developments mean for democracy in Turkey?

Stein: It is important to put it in its proper context. There was a violent uprising [on July 15] in which over 200 people were killed. Warplanes were dropping bombs on the capital city of the country. In that context I don’t find the state of emergency all that surprising. In similar instances across Europe—in France and Belgium—we have seen the imposition of states of emergency.

The concern in Turkey is that unlike France, in particular, the legacy of strong democratic institutions is just not there. There are concerns among a number of Turks—and you are beginning to see this reflected in parliament, particularly from the CHP [the Republican People’s Party], the main opposition party—that the government should not try to take this too far in terms of security measures imposed after the coup. A lot still has to play out to see where this goes in Turkey.

Q: Do you expect Turkey’s purge following the coup to have any impact on the prospects of Turks getting visa-free travel in Europe and, more broadly, on the deal to alleviate Europe’s migrant crisis?

Stein: To date, we haven’t seen any moves on the EU side to suspend their designation of Turkey as a safe country for refugees to return to. Obviously the EU member states have a cynical political incentive not to suspend it because of the political implications all of them face from the influx of refugees.

The prospects of visa-free travel were always slim because of the seventy-two benchmarks that were put in place. Turkey has fulfilled sixty-seven of them, but there are still five outstanding—the most important being the redesignation of the terror law.

Q: Has Erdoğan been strengthened by this failed coup?

Stein: Strengthened is a strong word. A third of his generals and admirals are now in prison. There were air battles over his capital. By all accounts there are still putschists at large. The crisis in Turkey represents a profound fracturing of the military most obviously, but also Turkish institutions more broadly. So it has weakened Erdoğan in that sense. But in terms of his ability to maneuver and have the authority to enact certain political agendas that he may favor in the long term, sure it has helped him. That has yet to play out in terms of specific action on the political side that will benefit him—and here I am talking specifically about the movement to try and strengthen the presidential system.

Q: As you point out, almost a third of the senior military leadership has been arrested. What does this mean for Turkey’s military—its operations against the PKK and its role in the anti-ISIS coalition?

Stein: One of the big arrests was the commander of the Second Army, Gen. Adem Huduti, who was nominally in charge of the war against the PKK and, as of a couple months ago, was being praised by Erdoğan-sympathetic news outlets for his handling of the war.

Obviously when you have this massive turnover there are going to be problems with troop morale and also the effectiveness of the armed forces to carry out their day-to-day tasks. But I don’t think it will be very obvious to the outsider to see how it affects the PKK war because these problems will be internal to the Turkish military in terms of how the chain of command functions post-arrests. It will be hard to follow as outsiders to a very opaque institution.

As for the war against ISIS, the responsibility for the border is dispersed across two functions in Turkey: the military largely takes a secondary role to the gendarme, which answers to the interior ministry. The commander of the gendarmerie, during all of the recent events, had a heart attack, throwing even more chaos into an already turbulent situation, and raising more questions about his health status and who will or won’t replace him. But for the US, which is basically running the strike missions [against ISIS] out of Turkey, the heavy lifting was done in getting Incirlik opened. I don’t expect the Turks to close Incirlik air force base. I don’t see strike missions being affected with the caveat that the power has been off since [July 16] and nobody can come up with a decent answer as to why that is. They are running the base on generators.

Q: What impact is this likely to have on the US-led coalition’s efforts against ISIS?

Stein: The concern for the US-led coalition isn’t so much that they cannot run strike missions from Incirlik, it is that their counterparts in Turkey went to war with themselves. The stability of the Turkish armed forces as an institution, which I would argue on July 15 before the attempted coup was unquestioned, is now in chaos. People are going to be left trying to figure out: are the armed forces coherent; are they cohesive; and are the counterparts that the US deals with on a whole variety of missions—anti-ISIS being just one of them—still in their jobs?

Q: Is the political unity that was shown soon after the attempted coup at risk of fraying as the government crackdown expands?

Stein: The Gülen movement has higher unfavorable ratings than Donald Trump. Way higher. This is not a movement that people in Turkey like and I don’t think anybody is weeping over the Gülenists getting what many believe is deserved.

The discrepancy is that lot of the people then turn around and blame the AKP [ruling Justice and Development Party] for the Gülenists because of the alliance that they had between 2002 and November 2013. People accuse the AKP of being hypocritical.

Thus far you have not seen a breakdown in unity precisely because the Gülenists are so hated in Turkey. You are starting to see [the unity] fray a little bit now, but it is really important to put into context.

In the West, there is this tendency to focus on the purge and how many people have lost their jobs. In Turkey, everybody is still shell-shocked about what happened on [July 15] and are picking up the pieces and trying to reconcile a very traumatic event in their history.