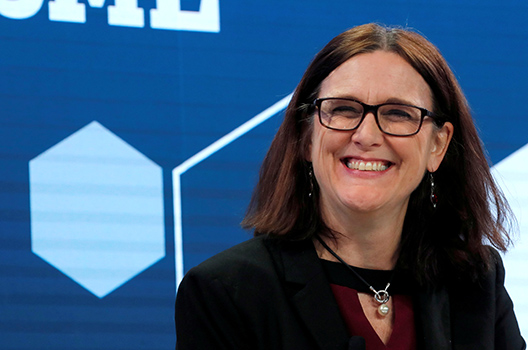 Amid the chaos over Brexit, few have noticed the quiet, but steady, progress on the transatlantic trade policy agenda. The European Parliament voted on March 14 against a resolution that called on European Union member states not to endorse negotiating mandates that authorize the European Commission to start talks with the United States. The defeat of that resolution sets the stage for a productive spring season of trade talks between the United States and the EU that focus on non-tariff barriers, as we recommended in August 2018.

First, the failure of the resolution on March 14 means that EU member states must now approve the negotiating mandates, which the European Commission issued in January.

Second, the DG TRADE consultation regarding bilateral regulatory policy cooperation provides insight into the 21st century trade policy agenda under discussion on both sides of the Atlantic.

News reports on the March 14 vote dutifully noted that members of the European Parliament (MEPs) failed to pass a non-binding resolution regarding the transatlantic trade talks. However, the failed resolution articulated opposition to the European Commission’s proposed negotiating mandate.  It was defeated decisively in a 223-to-198 vote, illustrating that a respectable majority of MEPs favors moving forward with yet another round of transatlantic trade talks.

The proposed negotiating mandate released by the European Commission earlier this year is narrowly drawn compared to the failed and ambitious Transatlantic Trade and Investment Partnership (TTIP). The mandate under consideration would authorize the European Commission to negotiate two different agreements with the United States:

Since the majority of advanced economy trade occurs in the services sector, and since agricultural goods are expressly excluded from the proposed negotiating mandate, some might conclude that the initiatives underway are the bare minimum needed to keep transatlantic economic ties functioning in an era of growing tensions and policy divergences.

However, a closer look at the structure and focus of the trade talks indicates that policy makers in Brussels and Washington are building a 21st century trade policy framework methodically and with far less fanfare than the failed TTIP. They are using the non-controversial industrial goods sector to start building the structure for a much more ambitious regulatory cooperation agenda.

As noted above, the European Commission’s proposed negotiating mandate includes authorization to negotiate for a conformity assessment process. The process under consideration does not involve joint product reviews. Nor would it involve equivalence determinations in which one sovereign provides public endorsement of its partner’s standards. It is understandable that policy makers on both sides of the Atlantic would want to avoid equivalence determinations. Those processes have proved to be political footballs when used in other sectors.

Instead, Paragraph 6 of the conformity assessment draft negotiating mandate contemplates that the preferred mechanism to reduce non-tariff barriers would be mutual recognition. The Commission wisely chose to avoid using those specific terms, however. Mutual recognition generates at least as much political controversy as equivalence determinations, but for different reasons. Within mutual recognition frameworks, compliance with local rules and laws is deemed sufficient for foreign authorities even if the local rules and laws are not equivalent or comparable. This is exactly the framework contemplated by Paragraph 6:

Creation of harmonized or joint transatlantic regulatory standards has long been a goal in Brussels. Periodic efforts at policy harmonization in general have been more successful in areas where no standards yet exist and, often, only when international or multilateral negotiating structures have been in place. Attempting to engage in policy harmonization at the bilateral level is ambitious.

The Commission understandably thus chooses to highlight in its request for comment areas where it is publicly exploring whether it would be feasible to pursue a “dialogue on standards… especially where no standards exist yet” with a particular emphasis on “robotics and technical textiles,” fabrics designed for use in industrial and commercial settings, which also implicate additional sectors (e.g., chemicals, nanotechnology). In addition to dialogue, the Commission seeks wide-ranging feedback on whether regulatory cooperation in specific sectors would enhance transatlantic trade.  No specific sectors were highlighted in the consultation.

The stage is set for a springtime renewal of US-EU trade policy. A focus on sectors that tend not to generate populist controversy (industrial goods) provides the foundation for policy makers on both sides of the Atlantic to experiment with deeper and novel ways to address non-tariff barriers.

In August 2018, we recommended that policy makers tackle non-tariff barriers in a methodical and pragmatic matter by starting small, focusing on newer technologies, and respecting existing regulatory processes. The Commission’s proposed negotiating mandate, its consultative paper, and the European Parliament’s vote last week all point toward steady traction in this direction in Europe. Now member states must ratify the negotiating mandate and authorize the Commission to explore what kind of regulatory cooperation and conformity assessment processes are feasible.