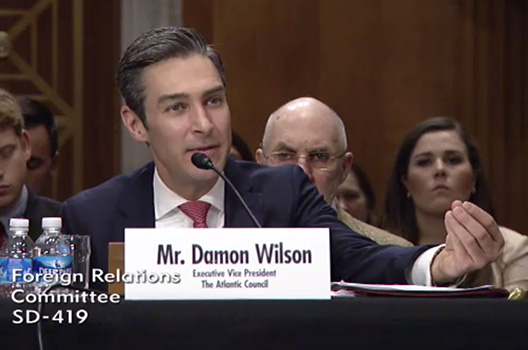 A new era of US leadership can lead an effort to help adapt, revitalize, and defend an international order that advances security, democratic governance, and prosperity, says Atlantic Council’s Damon Wilson

Europe is in crisis. The continent today faces a confluence of crises far more profound than most realize. As a result, the United States risks losing its most important strategic asset in global affairs: a vibrant Europe as a partner of first resort. It’s time for the United States to shift from observer to actor, and return to our historic posture of helping to forge European unity—not for the sake of some vision of a united Europe, but so that we have a European partner better equipped to work with us on enormous global challenges.

Today, Europe faces historic tests. To the east, Russia seeks to roll back the gains of the post-Cold War period, aiming to rewrite the rules fundamental to Europe’s security, undermine Europe’s unity, challenge its core values, and foster instability on its periphery. To the south, the erosion of state authority and borders in the Middle East threatens Europe with mass refugee flows and Islamic terrorism.

And yet the greatest challenge to Europe is not external, but internal. There is a crisis in confidence, a loss of strategic purpose that puts at risk the so-called European project, which aims to turn former adversaries into an integrated Union.

Greater integration has failed to restore growth, foster innovation, and create jobs. European publics and leaders question the fundamental political bargains underpinning the European Union. There is a dearth of vision and leadership which only accelerates the erosion of solidarity across the continent, while fueling skepticism toward bureaucratic Brussels and the rise of anti-establishment forces. Historic migration flows compounded by demographic shifts will permanently alter Europe’s character. The political fallout has only just begun.

Centrifugal forces are pulling Europe apart as the EU and its leaders stumble from crisis to crisis. While they often reach short-term agreements, they fail to address more profound, long-term challenges. Today’s leaders have not been able to offer the vision and sense of purpose that their predecessors articulated and which gave birth to the Union—that is, through unity, a ravaged population could find peace and prosperity. That formula no longer resonates with reality.

As a result, the Union itself is in question. The United Kingdom may turn its back on the EU this year, depriving us of a critical voice in shaping not only European Union policy, but the future of Europe. Such a decision may prompt Scotland to dissolve the United Kingdom, ending the US-UK “special relationship” as we know it. These moves could fuel other separatist efforts, while opening the prospect of additional states leaving the Union. At a minimum, the “Brexit” debate will occupy Europe’s political attention span for much of this year.

A stagnating France is struggling to rally Europe around a common counterterrorism policy in the wake of the Paris attacks, much less play its traditional role as an engine of European integration. An ever more powerful Germany and its Chancellor remain perhaps too cautious in their leadership.

After years of feeling marginalized, populism and nationalism are beginning to rear their ugly head in some of our closest allies in Central Europe. And our Mediterranean allies continue to grapple with the corrosive impact of long-term youth unemployment and slow growth.

Europe is in the midst of an historic transition whose outcome is uncertain and implications little understood. And yet the stakes for the United States in what sort of Union the EU becomes are enormous.

Europe is the world’s largest economy and foreign assistance donor, carries significant political throw weight, and provides the most interoperable and deployable militaries among our allies and partners.

However, Europe’s internal challenges have now become a critical strategic problem for us. We risk losing a Europe—mired in the politics of the parochial—as our most militarily capable, political willing, and financially able like-minded partner.

As Europe’s future is in play, the United States has an opportunity to re-engage. After all, two devastating World Wars taught Americans the costs of remaining aloof to developments in Europe. Our goal today should be to help restore the Atlantic community’s confidence, competitiveness, capacity, and will to act at home and abroad.

To achieve this, first, we must regain our role of fostering European unity. The European project began as an American project. That said, we cannot simply return to Cold War-era tactics. But with political leadership and nuanced diplomacy, we can play an important role in shaping Europe’s evolution. This begins with making it clear that a United Kingdom without a voice shaping Europe is a United Kingdom that risks losing its relevance in the world.

In turn, a Brussels that doesn’t reform itself to gain more legitimacy among the people of Europe won’t have the capacity to overcome its biggest hurdles. And we should engage—not isolate—certain allied leaders, providing them a political and moral tether, while making it clear there is no space for illiberal democracies within our community.

Without restoring economic growth, Europe will not regain its confidence. Nor will it significantly increase its investment in defense. Growth is a strategic imperative. So our second objective should be to negotiate an ambitious Transatlantic Trade and Investment Partnership (TTIP) agreement to help create a transatlantic marketplace based on high standards that help unleash innovation, entrepreneurship, and competition. Such an agreement, along with the Trans-Pacific Partnership (TPP), will help ensure that the leading free markets of the world set the global standards.

Third, we must take bold steps to bolster NATO ensuring our alliance is strong and restoring its centrality to our national security policy. Defense Secretary Ash Carter’s announcement on February 2 is a major move in this direction. This means adopting policies and postures that deter Russia, including positioning significant combat forces in NATO’s eastern flank. We should help build the deterrent capability of our eastern allies and partners, including Ukraine; cooperate with the United Kingdom, France, and Italy in particular to sustain their military prowess; and encourage Germany to continue to assume much greater defense responsibilities.

As we commit to Europe’s defense, our European allies must step up their own defense investments. We need a stronger European pillar of the Alliance, but we won’t achieve that by ceding leadership of the Alliance or passing the baton to the EU on security matters.

Fourth, the United States must lead Europe in forging a strategy toward Europe’s east. Europe faces a fundamental security challenge from Russia, which the EU is ill-equipped to manage alone. The transatlantic community has held together remarkably well on sanctions, but we don’t have a comprehensive strategy to avoid allowing Russia to hold Europe’s neighbors in the east hostage with frozen conflicts and occupied territories.

Our effort should begin with a redoubled, coordinated effort to help Ukraine, Georgia, and Moldova succeed in their transformations at home, deepen the resilience of their societies, and advance their integration into our community and its institutions. At the same time, we should work with Brussels to more decisively eliminate avenues for Moscow to intimidate or influence European nations using energy or corruption.

Fifth, Europe’s southern challenge is equally our own. The United States has been a central actor in these crises, and, as such, carries some responsibility not only to address the sources of the conflict themselves, but to assist Europe in responding to the refugee crisis. The first step is a more decisive approach to Syria, Iraq, and Libya, as well as a continued military commitment to Afghanistan. But we could also lead in this crisis by joining with Europe on a deeper counterterrorism and intelligence-sharing partnership, and, with Europe, engage willing partners in the region with a major capacity building initiative.

The United States could also demonstrate moral leadership by being more generous in welcoming refugees from the region’s conflicts and avoiding reactionary policies that could curtail, too severely, the Visa Waiver Program.

Finally, only the United States can rally the transatlantic community toward a greater purpose: we either come together to shape the future or cede this role to less benevolent actors or chaos. Together, North America and Europe laid the foundation for an international order that offered the prospect of security, prosperity, and freedom for so many around the globe. However, inward-looking political trends on both sides of the Atlantic, if left unchallenged, will erode our key institutions and allow the global agenda to be set by our detractors. A new era of US leadership can lead an effort to help adapt, revitalize, and defend an international order that advances security, democratic governance, and prosperity rooted in the rule of law.

If we have to face enormous challenges in the coming years with Europe in disarray, our task becomes even more difficult. If we make a concerted effort now to bolster our closest partner, the United States can play a galvanizing role involving others on so many issues rather than face them alone. Just as you would in politics, let’s start by rallying our base.

Damon Wilson is the Executive Vice President for Programs and Strategy at the Atlantic Council. This is an abridged version of testimony he delivered to the Senate Foreign Relations Committee at a February 3 hearing on “Strains on the European Union: Implications for American Foreign Policy.”

Image: Damon Wilson, Executive Vice President for Programs and Strategy at the Atlantic Council, testified to the Senate Foreign Relations Committee at a February 3 hearing on “Strains on the European Union: Implications for American Foreign Policy.”