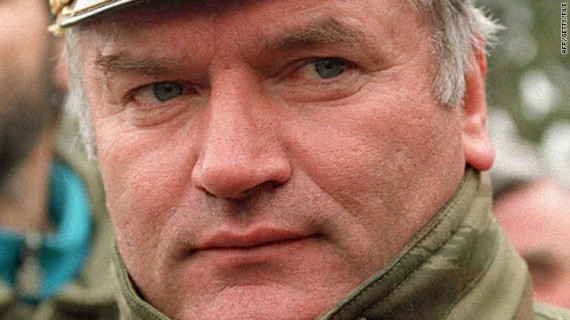 Ratko Mladic, the former Bosnian Serb general blamed for the massacre of 8,000 Muslims at Srebrenica, has been caught after 16 years on the run from a UN war crimes indictment.

Serbian President Boris Tadic announced the arrest this morning, proclaiming "All war criminals must face justice" and promising speedy extradition to The Hague for war crimes, where he will join his former boss, Radovan Karadzic.

Danger Room‘s Spencer Ackerman quips, "Moammar Gadhafi better watch his back. May is shaping up to be aterriblemonth to be a mass murderer." He refers, of course, to the Navy SEAL killing of Osama bin Laden four weeks ago. The same thought occurred to New York Magazine’s Dan Amira: "If you’re a genocidal maniac wanted for unspeakable crimes against humanity about a decade and a half ago, today might be a good day to throw on a new wig, hop a bus to a random location, or just dig a spider hole somewhere secluded and sit in it for a while."

More seriously, this removes a major stumbling block to Serbia’s reintegration into the European family of nations. Indeed,Tadic noted in his announcement the fantastically happy accident that "this is happening on the day Catherine Ashton is coming to Serbia." He added, perhaps too optimistically, "We ended a difficult period of our history and removed the stain from the face of the members of our nation wherever they live."

For her part, Ashton observed, "This is an important step forward for Serbia and international justice. Full cooperation with the International Criminal Tribunal remains essential on Serbia’s path towards EU membership." Likewise, French president Nicolas Serkozy declared the arrest "one more step towards Serbia’s integration one day into the European Union." Phil Cain of the Christian Science Monitor agrees that "Today’s arrest is a boost to Serbia’s hopes of gaining EU candidate status in the fall."

NATO Secretary General Anders Fogh Rasmussen released a statement saying that, "General Mladic played a key role in some of the darkest episodes of Balkan and European history. Almost 16 years since his indictment for genocide and other war crimes, his arrest finally offers a chance for justice to be done."

And President Obama declared, “While we will never be able to bring back those who were murdered, Mladic will now have to answer to his victims, and the world, in a court of law.”

But Amnesty International’s Widney Brown, while expressing satisfaction that "At last the people who suffered have hope that he will be brought to justice," warned "The Serbian authorities need to renew their efforts to arrest the remaining indicted suspect General Goran Hadzc believed to be at large in either Serbia or Bosnia and Herzegovina and bring him to justice." Tadic acknowledged as much in his remarks.

As with the bin Laden raid, questions will naturally come as to whether the host government knew all along that a mass murderer was hiding in their midst. Suspicions along those lines were hinted at in a UN Security Council statement: "Until now efforts by Serbia to detain fugitives have not been sufficient."

Tadic rejected this criticism, claiming,  "We have been cooperating with the Hague Tribunal fully from the beginning of the mandate of this government." He added, hopefully, "It is crystal clear that we did not calculate when we had to arrest Ratko." Alas, it’s not clear at all. Still, at least Mladic was hiding in a farmhouse near the Romanian border owned by a cousin rather than a stone’s throw from Serbia’s military academy.

Presumably, these concerns will be mitigated so long as the Serb government continues to cooperate. Mladic was the most visible sticking point to reintegrating with Europe and, surely, they’ll now do what they can to round up the smaller fish. What’s loyalty to some accused war criminals against joining the world’s most prosperous economy?