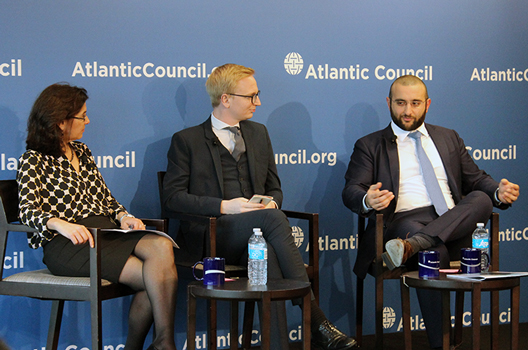 The promise of foreign reconstruction aid will not induce cooperation from Syrian President Bashar al-Assad, which is why international efforts to rebuild the war-ravaged country should focus on local solutions, removed from the regime’s sphere of influence, according to an Atlantic Council analyst.

“A regime that would rather have gone through what it had to go through over the past six years… than [share] political power… is not going to do so if we offer them money,” said Faysal Itani, a senior fellow with the Atlantic Council’s Rafik Hariri Center for the Middle East.

Among others, Federica Mogherini, the European Union’s high representative for foreign affairs and security policy, has deemed reconstruction funding the last bit of leverage Western nations still hold over the Assad regime. However, Itani said: “I don’t see it.” He said Assad would disrupt and manipulate any effort to rebuild in territories controlled by the regime.

As Syria winds down the sixth year of a civil war which has ravaged the country, left hundreds of thousands dead, and many more displaced, international actors have begun to look to the future of the country and a path toward rebuilding.

According to Mona Yacoubian, the senior adviser for Syria, the Middle East, and North Africa at the US Institute of Peace, this leaves Western countries with a fundamental dilemma: “To what extent, if at all, should the international community engage in the rebuilding of Syria at a time where there is no final political settlement, and it seems clear… that for the short- to medium-term, the Assad regime will remain in power?”

To answer this question, Itani and Tobias Schneider, an independent international security analyst, engaged in a discussion moderated by Yacoubian at the Atlantic Council on December 4, to set forth the strategy and recommendations in their recently released report: Rebuilding Syria.

“Not only do I not think we would have leverage on the regime, I think very quickly the leverage would be turned on us because we are the ones with the humanitarian imperative,” said Schneider. “For now,” he added, “we have done our best, but we have still engaged because the humanitarian need is just so overwhelming.” The US government and US Agency for International Development have already begun stabilization efforts in non-regime-held territories.

Assad, who contributed to the scale of the humanitarian crisis by committing war crimes throughout the conflict—including forced displacement of Syrian people, bombing civilians, and gassing opposition populations, has retained his hold on power. His ongoing control of Syrian resources, and the last vestiges of conflict zones which may once again erupt into fully fledged violence, complicate the prospect of relief and reconstruction efforts.

In such a highly politicized situation, Itani said that those involved cannot skirt the moral questions involved in crafting a path to reconstruction. He and Schneider agreed that in order to make meaningful strides toward humanitarian relief, international actors seeking to help find a solution must work around the Assad regime, which will disrupt those efforts in any regime-held territories.

Itani outlined two key strategic imperatives which much be considered as part of any revitalization strategy: resolving the widespread population displacement resulting from conflict and the consequent spread of terrorism. These concerns inform the strategy set forth in the report.

Schneider described how the regime has effectively “won” the war and controls the majority of the Syrian population still in Syria. However, he said, over half of Syria’s population no longer resides in the country. “Now you have a large share of the Syrian population living in complete suspension somewhere between Berlin and Turkey… that see no future under Bashar al-Assad,” said Schneider.

A major component of reconstruction involves bringing Syrians back to Syria, said Itani, adding that they do not want to return. However, Western countries have a stake in resolving this issue and by extension an interest in participating in the solution. In particular, Europe has borne the brunt of the massive refugee flows from Syria. According to Schneider, “there is an interest for Europe to make sure there is a space inside Syria for all these people to call home.”

“The EU has consistently been accused of readying for [reconstruction],” said Schneider, “but at the same time they also insist that there has to be a political process first.” Without a political solution, he added, many people will remain permanently displaced.

Though many in Europe believe that the incentive of funds could help bring about such a process, Schneider insisted that funneling money through the regime will not allow displaced Syrians to return home. Referring to Western countries leading reconstruction efforts, he said: “We’re the only option they have.”

While stabilization efforts have begun in a number of areas throughout Syria in which the conflict has diminished, “the country is still in the throes of conflict; there is not a political settlement yet,” said Yacoubian. As outlined in the report, however, international actors cannot plan their reconstruction efforts around a post-war scenario.

Itani and Schneider recognized that the ongoing rule of the Assad regime is an unavoidable reality of reconstruction efforts. “We accept that the regime of Bashar al-Assad will remain in place in Damascus, and we will have to step around that,” said Schneider. “We have to, for practical as well as moral problems.”

“Going through the regime at this point wouldn’t serve humanitarian interests in the immediate sense,” according to Schneider, and “we would also cement the population warfare that has been waged.”

Instead, Schneider described the strategy outlined in the report which is to “look for communities, territories, areas in Syria where meaningful things can be done.” Key geographies fitting this description include: Syrian Democratic Forces-controlled territory, including northern Aleppo; Euphrates Shield territory, on the border with Turkey; and in opposition-held areas near the Syria’s southern border with Jordan.

There, said Schneider, stabilization and reconstruction efforts must focus on local solutions and rebuilding of infrastructure in such a way as can be constructed, operated, managed, and maintained locally. “Local stabilization cells… have taken on this responsibility and done their own learning processes to negotiate spaces that can be used at various levels,” he said.

However, Itani cautioned, the peace enjoyed by these areas is temporary. The de-escalation agreements which have brought a reprieve from conflict are the “least bad hope in order to bring about a sustained end of violence,” he said. An effective de-escalation zone requires an enforcement mechanism, according to Itani. Without that, he said, it would be “foolish” for Western countries to go in and try to completely rebuild.

Ultimately, “proto-democracy in war time is never going to be smooth,” said Schneider. He cautioned that “if we have too high of standards… we set ourselves up to fail.”

Yet only a year ago, said Itani, the idea of reconstruction in Syria was “an academic debate.” Now, he added, “the idea that the West may be part of this process of rebuilding Syria is not far-fetched.” According to Itani, there is a heartening degree of institutional memory in the United States. “We have a lot to build on and scale on,” he said, “we’re not starting from zero.”

Image: (from left) Mona Yacoubian, the senior adviser for Syria, the Middle East, and North Africa at the US Institute of Peace, moderates a discussion with Tobias Schneider, an independent international security analyst, and Faysal Itani, a senior fellow with the Atlantic Council’s Rafik Hariri Center for the Middle East. (Atlantic Council)